"I have announced this star as a comet, but since it is not accompanied by any nebulosity and, further, since its movement is so slow and rather uniform, it has occurred to me several times that it might be something better than a comet. But I have been careful not to advance this supposition to the public." -Giuseppe Piazzi, discoverer of Ceres, the first Asteroid

Out beyond Mars, but not quite out as far as Jupiter, a collection of thousands of rocky objects, ranging in size from pebbles all the way up to the size of Texas, lies the asteroid belt. 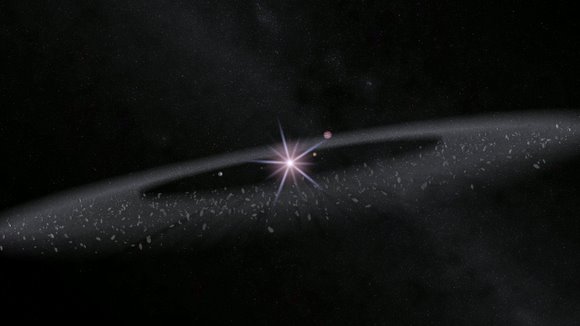 While the very first asteroid was discovered way back in 1801, with many thinking it was a planet, it was quickly discovered that there were many small, sub-planet-sized objects in between Mars and Jupiter. 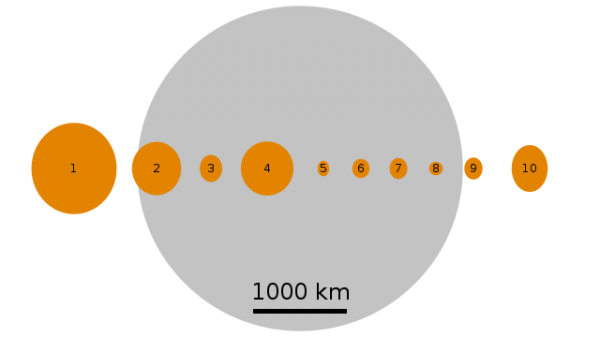 By 1849, there were 10 objects known, with the largest being Ceres and the second largest -- at least in terms of mass -- being Vesta. As even Ceres is minuscule compared with our Moon (shown in grey, above), none of these objects could rightfully be considered planets, and hence we now consider the entire collection to be the asteroid belt. While the combined mass of every asteroid is just 4% the mass of our Moon, Ceres and Vesta alone are estimated to make up nearly 40% of the mass of the entire belt. 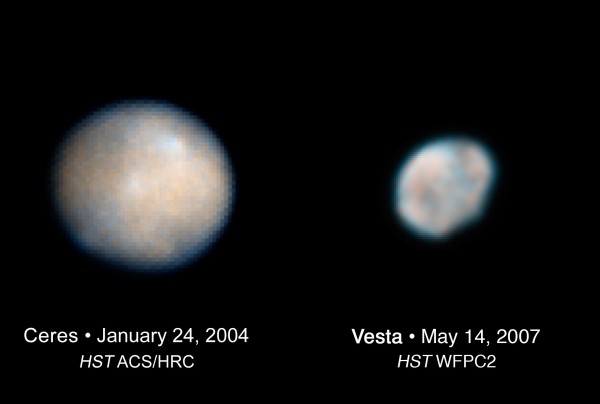 Because of their small sizes and their incredible distance from us, even these two most massive asteroids -- about the size of Texas and Arizona, respectively -- barely have any discernable features, even when imaged with the Hubble Space Telescope, as shown above. 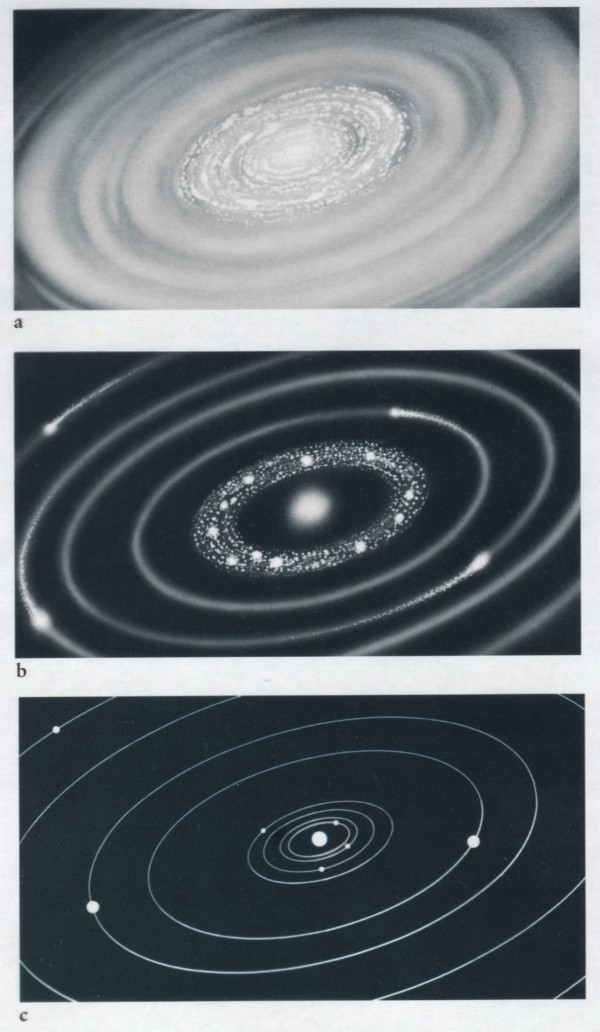 But they are still around in the asteroid belt; Ceres and Vesta are, officially, protoplanets that failed to coalesce into full-on planets. So if we wanted to learn more about the formation of rocky planets in the Universe, that would be the ideal place for a mission. And -- wouldn't you know -- we've got just such a mission going on right now: say hello to the Dawn Spacecraft! 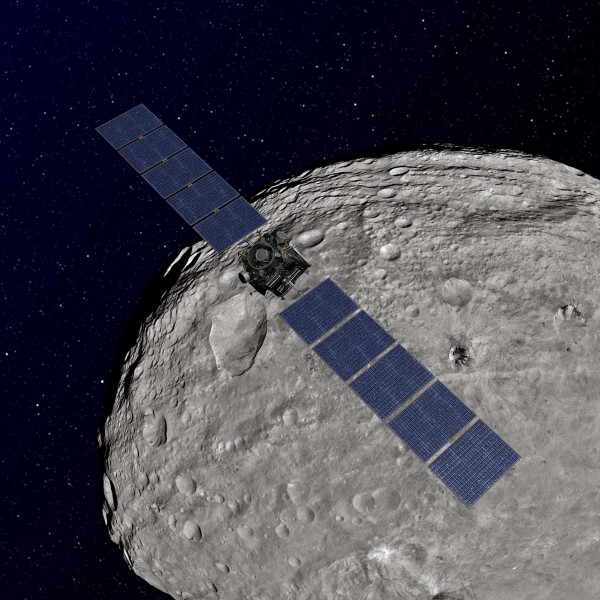 For over a year, now, Dawn has been in orbit around Vesta, taking more than 28,000 images, mapping the surface in 3-D, and learning more about this distant protoplanet than any such object ever before. Just a visual comparison of Dawn's true-color composite of Vesta with the one from Hubble should stop you in your tracks. 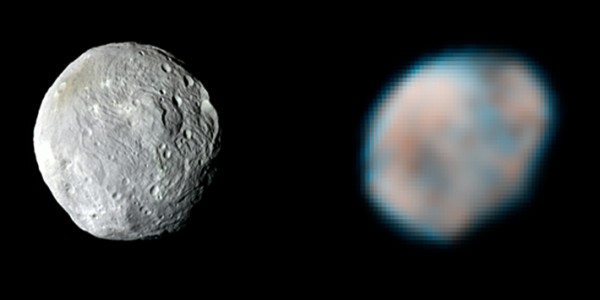 There are some amazing features we've found on heavily-bombarded Vesta, some of which are completely unique -- as far as we know -- to our Solar System. Perhaps the most striking is the impact basin over 300 miles (500 km) in diameter on its South Pole, with a mountain over 14 miles high in the center! 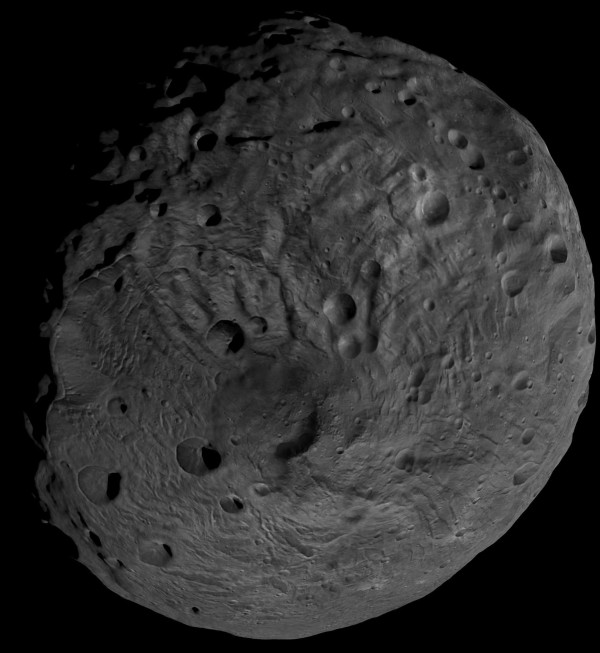 Known as Rheasilvia -- named after the mother of Remus and Romulus -- this crater is 90% the diameter of the entire asteroid, and the wave-like ripples you can see throughout Vesta clearly originated from this impact! Perhaps only two or three other asteroids in the entire belt would have survived an impact like this; all others would have been destroyed.

A false-color topographic map that I've managed to track down should really show you just how gigantic this feature is. 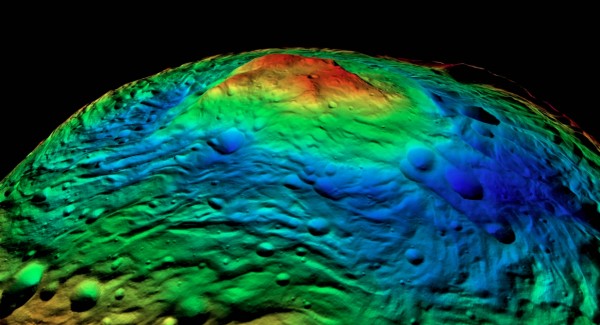 The impact responsible for this also happened relatively late in the Solar System's history: while most protoplanetary collisions were done more than 4 billion years ago, Dawn discovered that this impact on Vesta happened just 1-to-2 billion years ago, which is very late for the Solar System. The great impact also created this remarkable system of trenches along Vesta's equator. 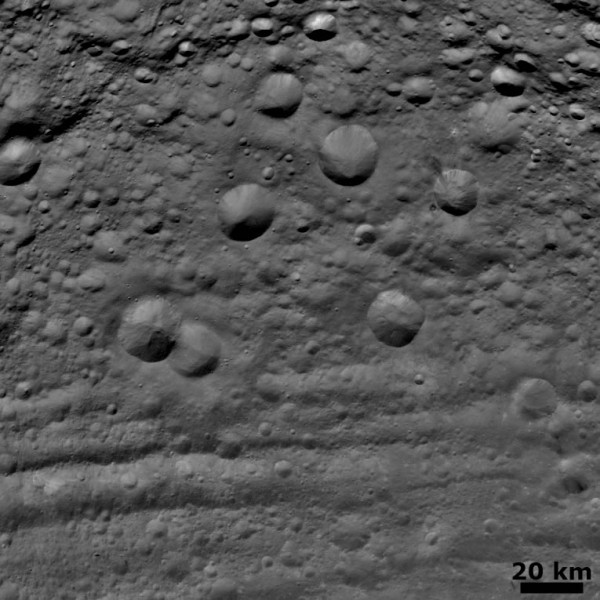 These equatorial trenches are many hundreds of kilometers long, which is gigantic considering the entire asteroid is only some 530 km in diameter! You may also notice that, in addition to the normal light-and-shadows you see over the terrain, there are lots of materials on Vesta that are simply intrinsically dark. You can really see this if you look at the "Snowman" on Vesta. 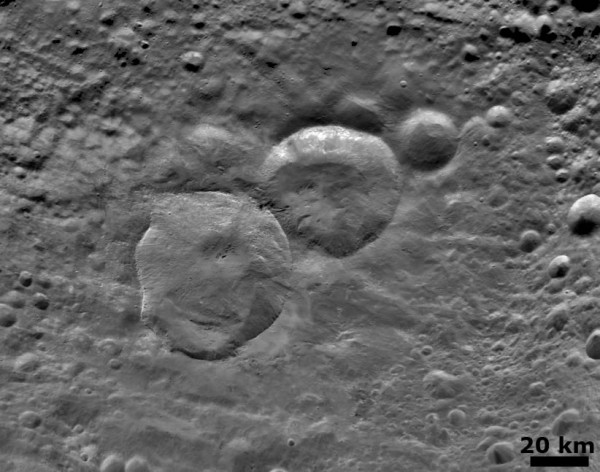 This is still a major mystery: where did this dark material come from? One leading theory is that it came from beneath the surface, and was kicked up unevenly by the impact that created Rheasilvia.

What's kind of remarkable is that tiny "Vestoids", or rocks originating from Vesta, were undoubtedly kicked off of the giant asteroid from that impact, and some of them made it to Earth! But back to these three "snowman" craters -- Marcia, Calpurnia, and Minucia -- we've got a true-color image of their interiors as well, and they... well, it's simply remarkable. 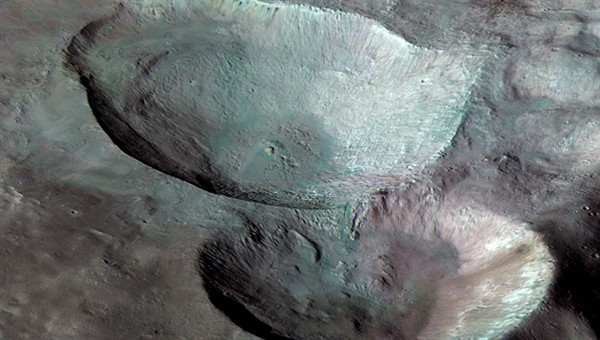 Vesta itself is quite rare in many ways: it rotates very rapidly, completing a rotation in less than 6 hours, and it's inclined both to the ecliptic (at 7 degrees) and on its axis (at 29 degrees), so that there are no permanently shadowed craters. If we could watch Vesta from afar in space, this might be what we'd see.

And while that might strike you as absolutely amazing -- and well, it is -- it's still not the most spectacular thing I've got to show you. A huge German collaboration has put together this remarkable flyover sequence of Vesta, complete with explanations of what was discovered, and I can't do it any better justice than the team has already done. (Full info here.)

On the night of September 4th/5th, Dawn will depart Vesta for good to make its way to Ceres, the largest and most massive object in the entire asteroid belt, and will work its magic over there. This is as close as we've ever come to understanding the formation of the Solar System and -- by extension -- the ultimate origins of everything on our world.
Tags
Astronomy
Solar System
spaceflight
Video
asteroid
asteroid belt
asteroids
Ceres
dawn
Dwarf Planet
Hubble
image
NASA
spacecraft
Vesta
spaceflight

For the telescope bunch I remember seeing this in
August's Sky and Telescope:

Both Vesta and Ceres are only about 5 degrees apart right now. They are essentially "coming out" of the Hyades open cluster's V shape with Jupiter up above and to the right. Jupiter is getting decently high in the sky by about 2am CDT so it should be a pretty good showing. Plus M1 (Crab Nebula) will be within about 2 degrees of Ceres for the next few days. That should make a pretty good photo for you refractor types. I can only hit 1.5 degrees with my 30mm hand grenade so no one shot kills for me.

The video's imagery had consistent lighting.
Am I correct in deducing that the video was recreated from a 3-d model of the planetoid?

"they’re made up of different elements than we are"

And... "officially"? After 2006, nothing's going to be 'official' in planetary science for a long time to come. Yeah, the Dawn team calls Vesta a protoplanet, but that doesn't make anything official, and it doesn't need to.

@Cody Lawson - You can see the video in 720p resolution here:

?? The asteroid belt is an exploded planet. This has been easily proven.

I do hope these large objects are keeping their distance and will continue to do so! Reassurances?