Giving thanks for our place in the Universe

All that is real about ourselves is nothing to be ashamed about; quite to the contrary, it's something to be eminently thankful for. This very existence is all we have, and while it's minuscule compared to the entire Universe, it required the entire Universe to bring us to the point where it's possible for us to exist.

What do I mean by that?

I mean that everything we've ever known about our existence owes its origins to something far grander than our experiences here on Earth would have us believe. Yes, it's true that our experiences on Earth, stemming from the very first proto-cell ever to reproduce itself billions of years ago, whose legacy is encoded in the nucleic acids of every creature in existence today, provide us with a remarkable and rich natural history that managed to lead to us. Without the events of the past four billion years on Earth, each one of us, to say nothing of the trillions of generations of living creatures that we're descended from, would never have existed.

But those same atoms that now make us up -- that millions of years ago made up our ancestors -- have been around on our planet since its birth, some 4.5 billion years ago.

And where did those atoms come from?

Practically all of the atoms we find on Earth: Nitrogen, Oxygen, Carbon, Iron, Silicon, Sulphur, Nickel, Magnesium and Calcium -- over 99% of the atoms on our planet -- were once inside of a star that went through its entire life cycle, burned up all of its nuclear fuel, and died in a spectacular supernova explosion. 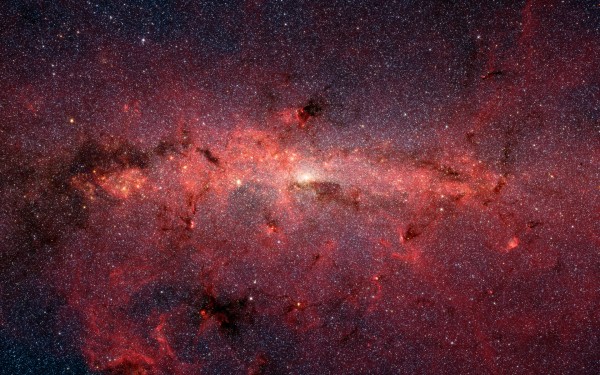 That burned-up fuel from prior generations of stars that lived and died created practically all the heavy elements -- every single atom heavier than element #4, Beryllium -- that exists in the Universe today. Only after multiple generations of stars, living and dying, their fused atoms recycled into star-forming regions rich in unburned hydrogen and helium, could a star system like ours, complete with rocky planets and the ingredients for life, be formed. 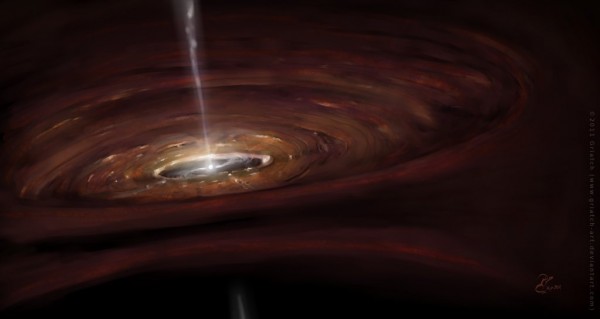 In order for those stars to exist, burn, recycle their elements, and eventually form successive generations containing planets, heavy elements, and life, it required a Universe full of massive galaxies, loaded with the light elements capable of forming stars in the first place. 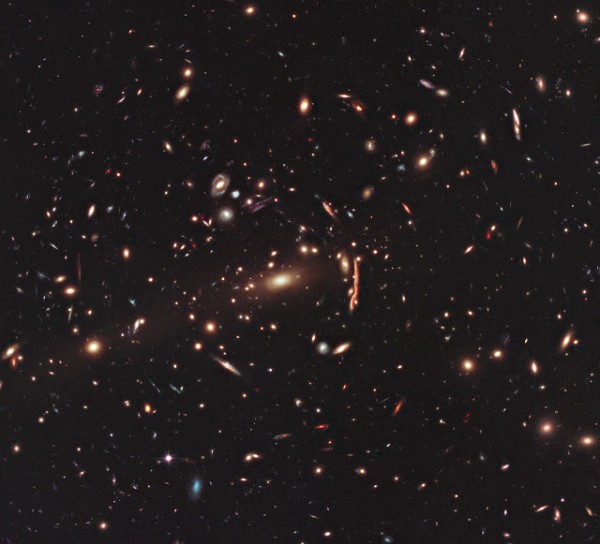 The galaxies themselves, great cosmic spirals, ellipticals, and irregular behemonths, collections of billions or even trillions of suns' worth of matter, are the gifts of a matter-filled Universe operating under the laws of gravity. Given the history of the Universe, some small fluctuations away from a perfectly uniform density, and general relativity, gravitation ensures that you'll get a Universe filled with hundreds of billions of galaxies, each containing, on average, hundreds of billions of stars.

It took the first 9 billion years of stars forming and galaxies merging and growing to set the stage to form our Solar System and the planet that we all call home. And it took the entire Universe, complete with our expanding spacetime and the laws of physics that govern everything that exists, to do it. 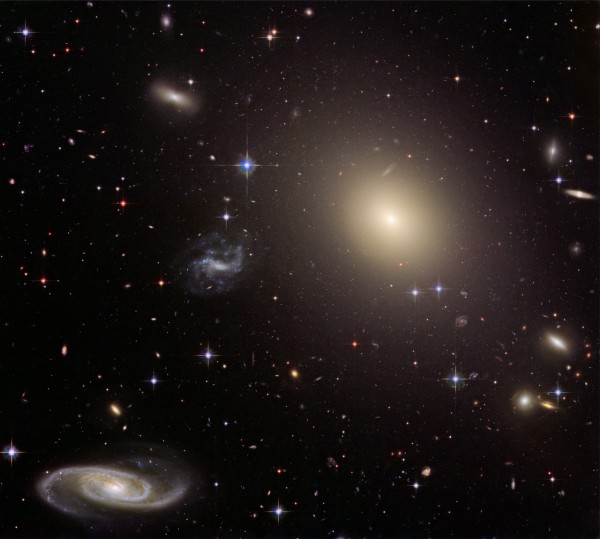 And what's amazing is that -- if you're willing to start with expanding spacetime and the laws of physics -- a Universe that looks a whole lot like ours, complete with clusters, galaxies, stars, planets, heavy elements, and, most probably, life, is inevitable. And it's inevitable all over the Universe. 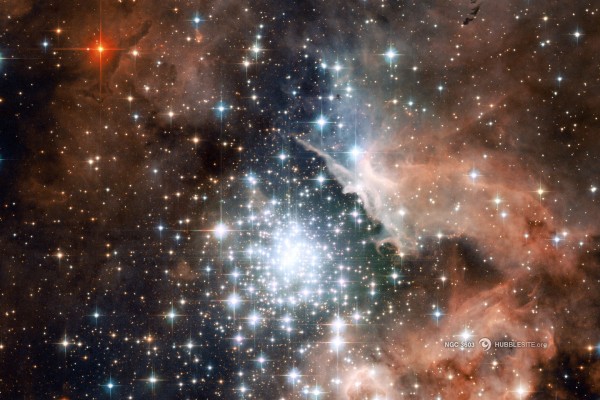 So don't be ashamed of what you are; be thankful for all that you are!

Tomorrow (Thursday) marks American Thanksgiving, an annual harvest festival and feast where we celebrate a variety of things, particularly the good things that have come to us in life. While I myself have a great number of personal things to be thankful for, including six wonderful years with my partner, Jamie, and nearly five years of sharing this Universe with you here at Starts With A Bang, the story of where we come from is universal to us all, and it's something we can all be thankful for together. 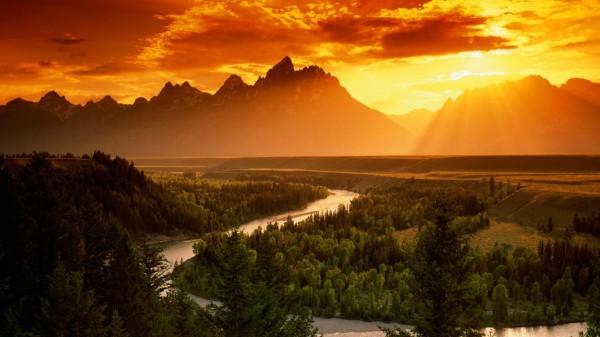 Happy Thanksgiving to each and every one of you out there -- whether you celebrate it or not -- and may your lives be filled with a wonderful bounty of things to be thankful for, today and all the days of the year!

Happy Thanksgiving to you and yours, and thanks for the wonderful blog!!

Your thanksgiving blog is indeed magnificent! To me "God" and "Universe" are equivalent terms and so let me wholeheartedly join you in this Thanksgiving.

Better than any pray I'll be forced into listening to today. Thankyou. I love the Shaw quote.

Thanks, and thanks for your ongoing creativity on this blog, and very best wishes!

Family, friends, good rational people, enthusiastic teachers like Ethan. There are a lot of candles in the dark to thank for lighting our journey through this fascinating place.

How do you get matter from an exploding star to reconverge into things such as planets, complete with angular velocity/rotation?

Some lose energy and leave, some gain and fall in.

Thank you for the inspiring reminder. May I never be distracted from our wonderfully infinite and eternal Being-in Love....

Thank you and happy thanksgiving! Today I am thankful for my existence, my family, friends, good health, and this blog!

Uh that should have been the other way round.

For those who feel like the universe is trying to kill them.It probably is.You can't get out of the universe either.And time is never going to end. I don't envy them and its because I am in a better position.For this I am greatful.

Shame has been used by the elite to control. That doesn't mean, however, that humans should abandon the very real and useful tool of shame. There ARE very real reasons one should be ashamed: such as lying, cheating, stealing, etc. Unfortunately, articles such as this simply re-inforce the new age notion that we should abandon all shame: which leads to a free for all of "anything goes."

The analogy is our relationship to anger. Our culture has given us the notion that anger=violence, which it does not. However, that brainwashing has successfully stripped us of our sense of justice and taking action based on the outrages of inequality.

DISCERNMENT is key in understanding the nuances of all of the natural emotions of humans. I'd like to see a bit more going on here in this article.

I am most thankful for the work that you and all scientists do, and particularly for this blog in which you make it accessible and understandable for lay people like myself.

"Unfortunately, articles such as this simply re-inforce the new age notion that we should abandon all shame"

Where does it say that? Or should you feel ashamed for posting to the wrong thread?

May all praise and glory be given to our heavenly father, Jehovah. He created all things in existence, through his son Jesus Christ and for his son.

A cascade of ecological events with unforeseen consequences is occurring around us. There are multiple causes. But human overpopulation of Earth is the prime factor.

USA have a per-person footprint 6x the average.

If the USA went to the average (and everyone above the average did so too), we'd have the ecological footprint for many things of a planetary population around a billion.

Are you maintaining that the planet cannot handle a billion people?

Thaks for this blog!! great story.. and great evo chart.. I took my son to the American Natural History Museum for Thanksgiving!

Well, I've been wanting to say "thanks" to Ethan for his new comment policy. It's helped to keep discussions on the point of the post and science and civil. So thanks Ethan.

It's so nice to see people communicate civilly. fundamentally, I believe in and like people. All kinds of people. People and relationships (e.g. through their activities in arts, science, play and ideas, etc. family, friendship, nature) are the real riches, the only richness to be desired and values.

So thanks Ethan for your excellent and welcoming blog. Yes this blog is a very welcome place to listen, learn, participate with seriousness, or humor, to join in wonderful astrophysics (i.e. human) discussion.

As to giving thanks for my place in the universe, who exactly am I thanking? Ahh yes, each you. Yes you friend, family, adversary, whether near or far, whether physical, virtual and/or psuedononimous (is that a word, well it is now).

Yes it is you, each personally, to whom I give thanks.
My toast to each of you, "To you, all the best.".

To those of us who don't believe your creation myths, I suppose eternal torment in Hell awaits us.

Your Jehovah is not worth believing in.