"Dogs are our link to paradise. They don't know evil or jealousy or discontent. To sit with a dog on a hillside on a glorious afternoon is to be back in Eden, where doing nothing was not boring -- it was peace." -Milan Kundera

It's the holiday season, and for most of us, that means spending time with loved ones, having some type of feast-day, and in many cases, giving and sharing gifts with one another. To spread a little holiday cheer, I present to you my all-time favorite Christmas song, Run-DMC's classic,

Those of you who've been following Starts With A Bang since the beginning know that, about five years ago, my partner Jamie and I adopted a rescue dog who had all sorts of temperament and behavior problems. (She actually failed the ATTS test, and it's only through a few mistakes that she wound up with us.) 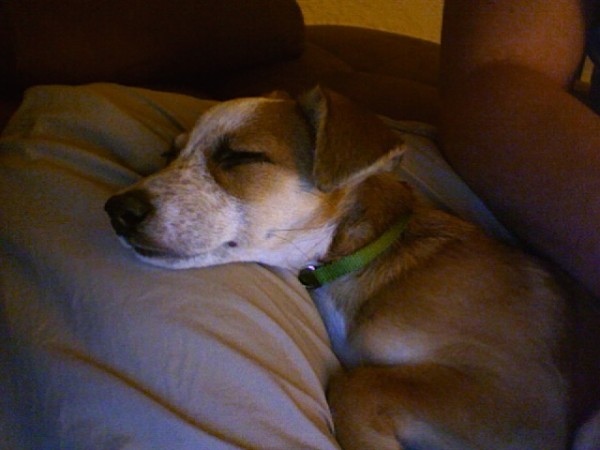 Image credit: me. As are all the photos in the post; my apologies for photo quality.

Although she's had more fear and paranoia issues than any dog I've met before, we learned a ton about animal behavior and worked with her tirelessly for months on end. By time I was ready to tell all of you about her, she was leaps and bounds better. 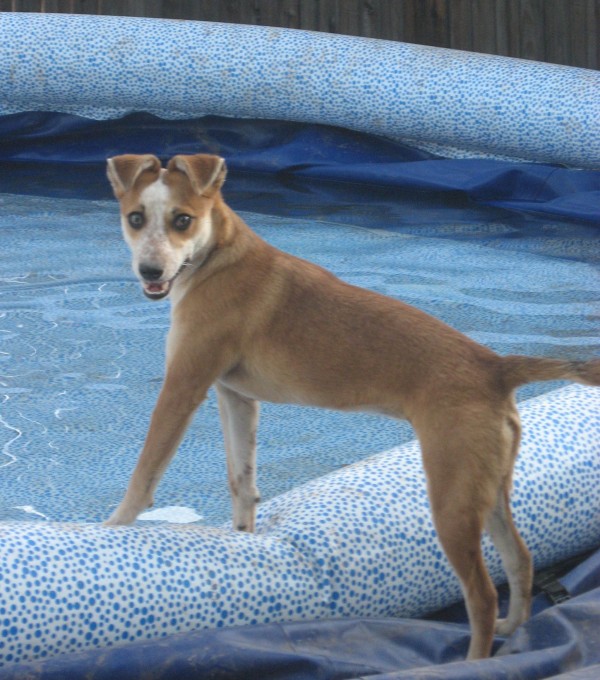 How could you not love a face like that?

We eventually settled on the name "Cordelia" for her, and she's turned out to be a wonderful -- and completely unique -- dog. Some days, we call her "Queen Cordelia" because she finds the highest-elevated pillow or cushion in the house, and that's the only place she'll want to be, no matter what else is going on.

Although we had tried before to find a companion dog for her, her extraordinary pickiness has meant that, since we got her in 2007, she's been the only dog in our household. 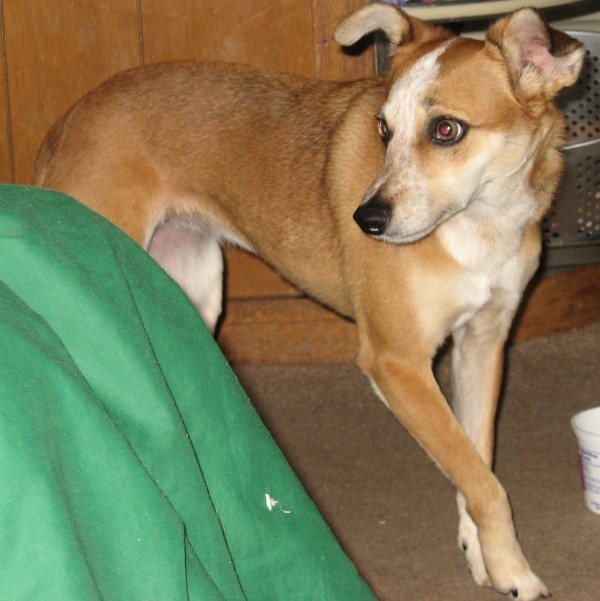 Her eyes vary from red to blue to green, depending on the camera/flash.

But for some reason, this month I've been talking endlessly about getting another dog for us. So earlier this weekend, we went to our local animal shelter -- the Oregon Humane Society -- and took a walk through to meet all the dogs they had. One of them stood out for us: a two-year-old mix that they had found, untagged and unchipped, on the streets in California.

After two weeks in a shelter there and no takers, she was transferred up to Oregon, where she was actually adopted! And then the X-rays came back. 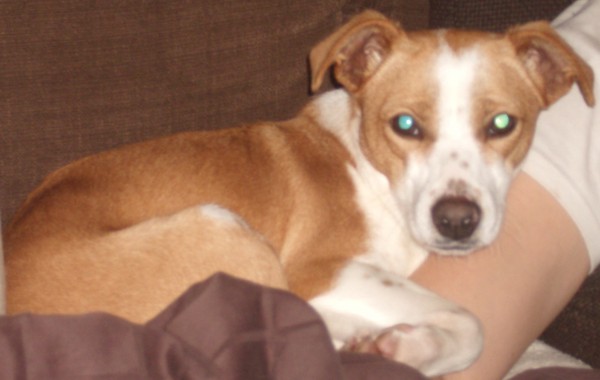 Our unnamed protagonist of the story.

And everyone learned that this dog has a fractured pelvis, and may require surgery down the road. The family that had agreed to adopt her immediately reneged, and unadopted her, unwilling to deal with the potential medical problems and costs. It's important -- when you adopt an animal -- that you're going to love and care for that animal for the rest of their lives.

But we liked her, and we liked her personality, and we thought there was a chance that Cordelia and this new dog could get along. So we brought Cordelia in to the shelter yesterday to meet her, and... they actually get along!

So we made an adoption (and a donation), and now we have the best holiday present ever. 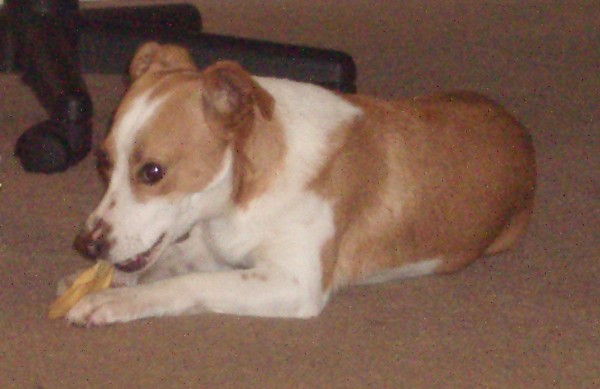 She likes meat, cheese, and rawhide chewies, as far as we can tell.

So now we have two, and these two rescue animals are the two best pets I could ever have asked for. I hope each of you get to experience the joy that comes with what -- for me -- has been the best Christmas/Chanukkah/Solstice/Holiday present ever: rescuing an animal and giving her a great home. 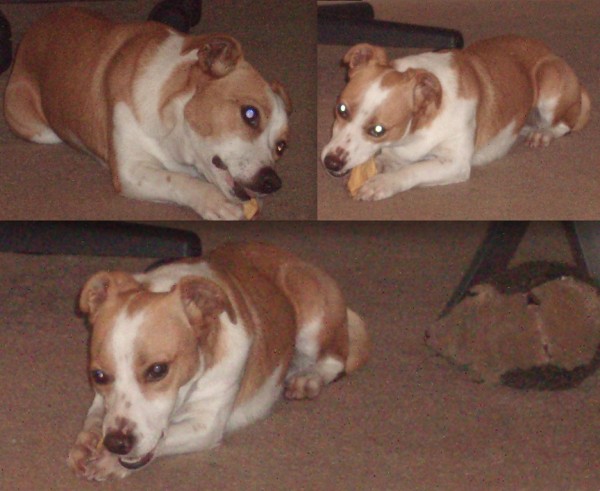 Not shown: she *really* likes being petted and curling up next to you, too.

I'm sure that -- just like it did with Cordelia -- once we get to know her a little better and figure out the best name for her personality, we'll find the right name for her.

And for those of you wondering, yes, Cordelia still gets just as much love, affection, and just as many treats as she ever did. 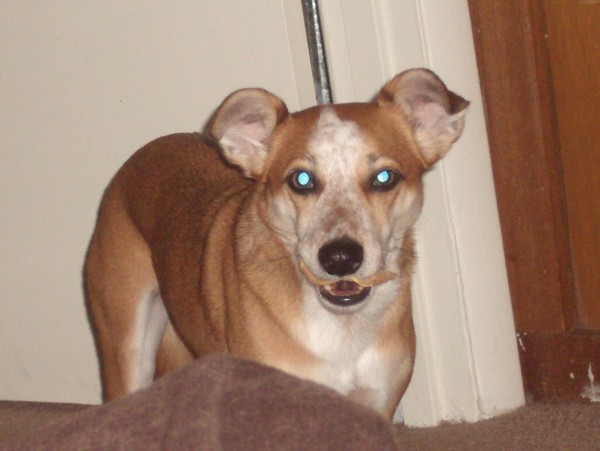 And she's still queen of the cushions. 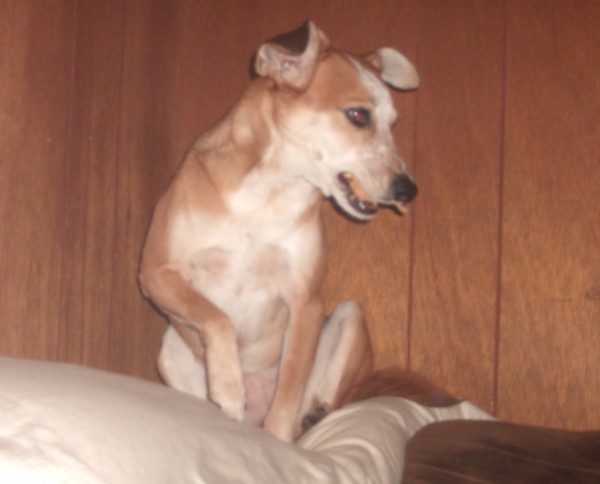 This is my spot, you guys.

Happy holidays to each and every one of you, and however you spend it, I hope it's wonderful.

Thank you Ethan for another great year of posts

Beautiful! Happy holidays to you too!

I have been an adopter for years now. My first was a Viszla to be a companion for my dying first dog. He would wake me at night if Sampson needed to go out. I would get up and carry my 100 pound Lab outside to pee. When Sampson eventually died it was three days before Bartok, the Viszla, would eat.
Since then, I have adopted eight more dogs., one or two at a time; all with no hope. Elderly, abused, sick and unwanted. They lived with me and our pack until their time came. Each of them brought fresh tears to my eyes. My only desire was to return the devotion that Sampson, my first companion, had given to me. He saved my life from a house fire; and was there for me when my life was falling apart around me.
We humans have domesticated many animals, sheep and cattle; horses and fowl. But it is only the dog that we have co-evolved with. We OWE them: they are part of us. It is more than love: or it is Love at its deepest roots.
Perhaps through recognizing and realizing our connection with the Dog, we might see our way to connecting to and saving our little blue planet we like to call "home."

How could the new name be anything other than Goneril or Regan? See – they bark at me.

We just recently adopted a dog from our local shelter, her name is Missy and she is the best!

For those of you wondering, we've named her Shao May, which is both "little sister" in Mandarin and also the name of a great character from a TV series we both enjoyed a great deal.

She's doing great, and so is Cordelia.