Welcome to Messier Monday, where we pick one of the 110 spectacular deep-sky objects of the Messier catalogue each week and learn a little more about it. 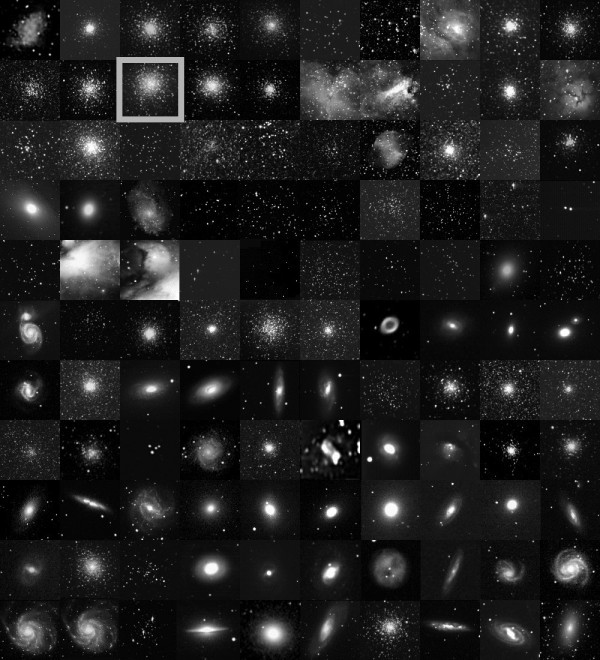 This week, to usher in 2013, I'd like to take a look at Messier 13, the Great Globular Cluster in Hercules, which is visible to northern skywatchers both immediately after sunset and, perhaps most spectacularly, again from after about 2 AM until sunrise. To find it at this later time, look above the horizon to the northeast and find the constellation of Hercules near Vega, one of the brightest stars in the sky. 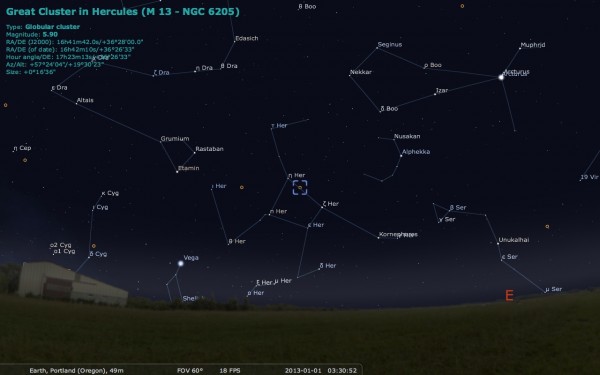 Right underneath the "armpit" of Hercules, you can find one of the brightest globular clusters in the night sky, visible under great viewing conditions to even naked-eye observers! 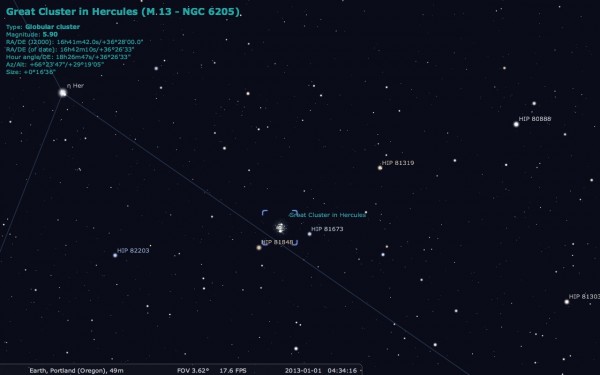 Through a small telescope or a decent pair of binoculars, you'll likely be able to resolve individual stars on the outskirts, plus a denser core that appears brighter and more nebulous. 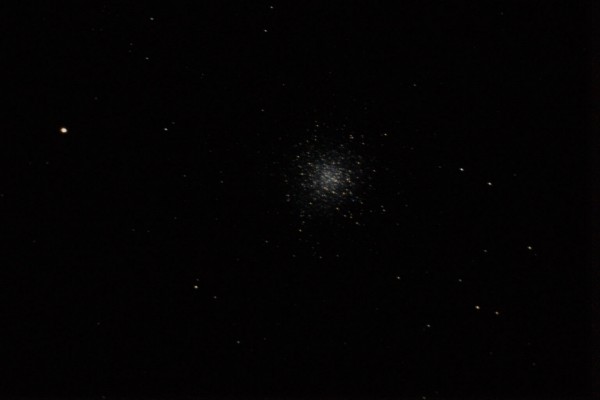 Like many of our galaxy's globular clusters, Messier 13 is old (with an age of around 11.7 billion years), has hundreds of thousands of stars (about 300,000, with a total mass of about half-a-million Suns), and has an intermediate concentration of stars towards the center (it's class V on a scale of I, the most dense, to XII, the least).

But Messier 13 is relatively close to us (about 22,000 light years away) and in a relatively clean area of the sky, meaning that it appears very large on the sky, at about half the diameter of the full Moon! It also means that -- with high quality equipment -- it's possible to get some spectacular views of Messier 13 at nearly all times of the year. 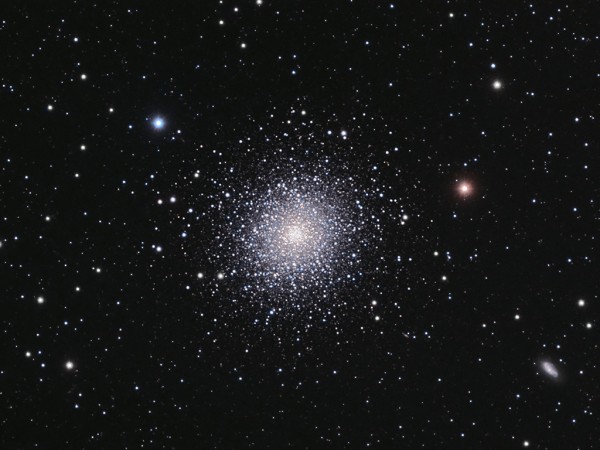 This great globular cluster is around 145 light years in diameter, and has stars ranging from Sun-like ones down to red dwarfs and white dwarfs, a few blue stragglers (common to globulars), and a few red giant stars, prominently on display in this multi-wavelength composite. 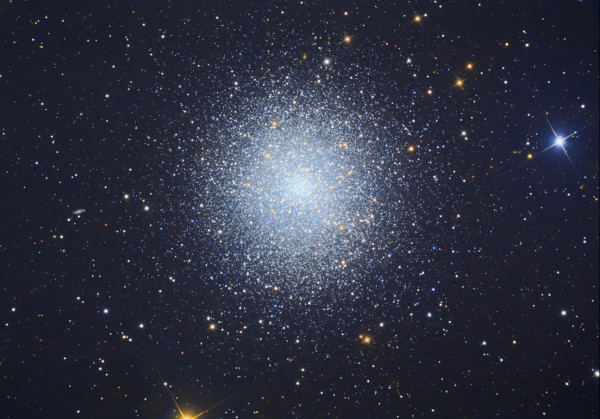 We've come a long way in the last few centuries; an early description of Messier 13 can be found by Edmond Halley (its discoverer in 1714), who described it thusly:

This is but a little Patch, but it shews itself to the naked Eye, when the Sky is serene and the Moon absent.

For comparison to our place in the galaxy, we have to go more that four light-years away from the Sun to encounter our nearest stellar neighbor, while if the Sun were in the core region of M13, we'd have over 100 stars within 3 light-years of us! 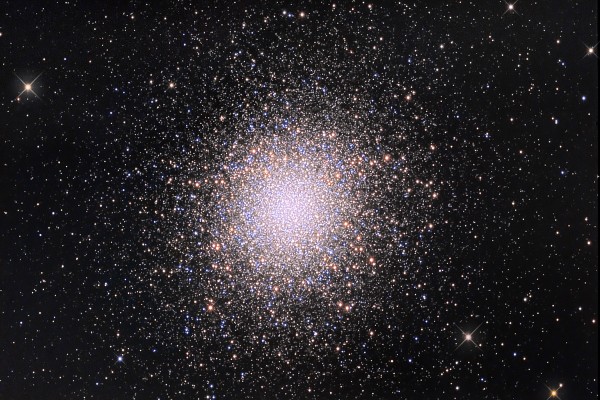 Visible light photos are the most common of The Great Globular Cluster in Hercules, but we can learn different things about the cluster depending on which wavelength of light we look in. For instance, near-infrared light is better at seeing older, cooler stars than visible light is, and this mosaic from the 2-micron All-Sky Survey highlights exactly where they are. 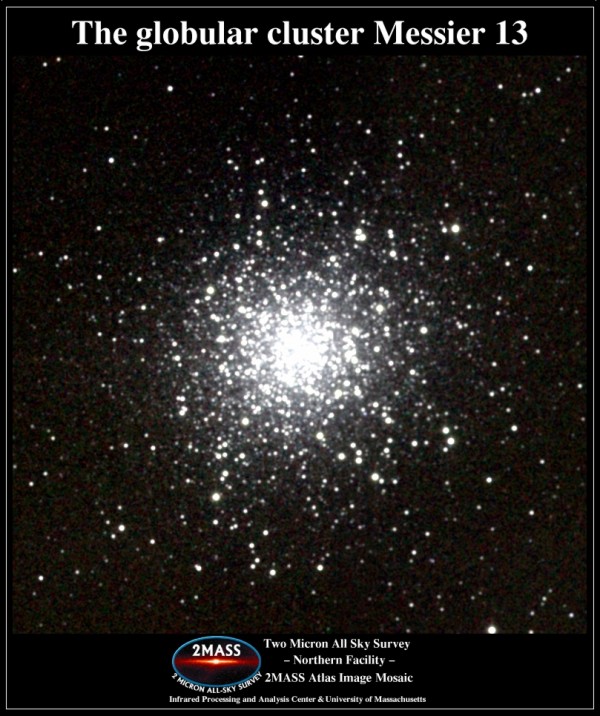 As you can see, it's incredibly dense in the core region. In fact, if the Sun were located there, we would have over 1,000 stars at night that outshone the brightest star in our current night sky: Sirius.

We can look in other wavelengths to find what else is there: X-ray light reveals sources like black holes and some neutron stars, UV light shows us where blue straggler stars are, far-IR shows us where star-forming gas is (and, as expected, there's none in M13), and the radio shows us the location of pulsar-like stellar remnants! 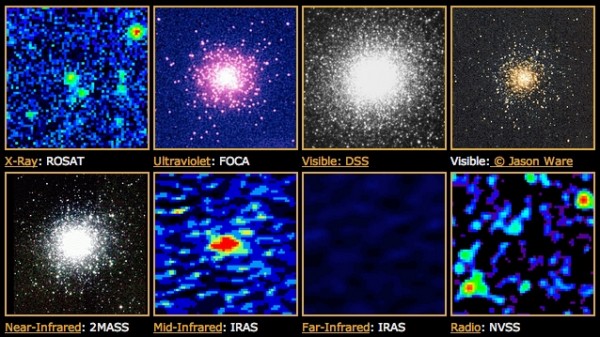 And yet, there are a huge variety of stars in there, despite the advanced age of the cluster. The Sloan Digital Sky Survey emphatically (with its over-emphasized color image) reveals red giants, blue stragglers, Sun-like stars and more very prominently. 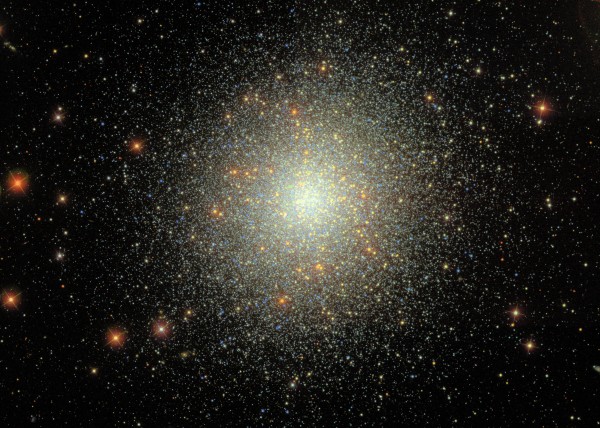 Of course, as always (when available), the best view of the Great Globular Cluster in Hercules comes from the Hubble Space Telescope, which imaged the innermost core (about 36 light-years wide) of M13 below. 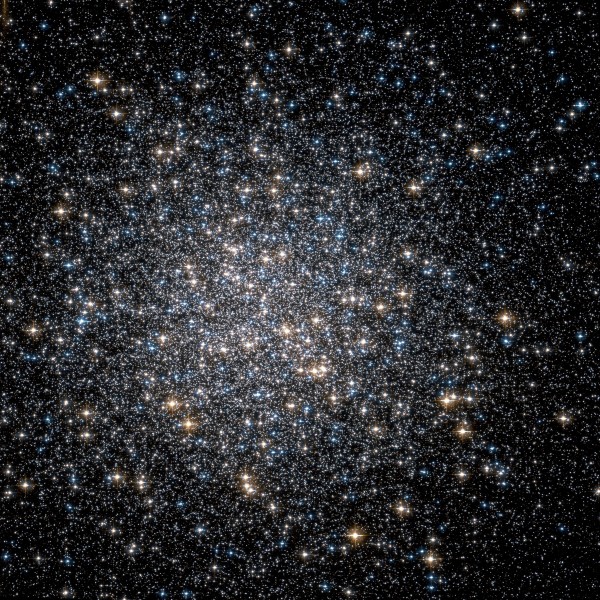 Of course, Hubble images are tremendously high-resolution themselves, and so I've gone and grabbed for you just the innermost five light years of this core; remember that the image below, if it were centered on the Sun, would include only our own system and the Alpha Centauri system, and that's it.

But in this Great Globular Cluster, there's an entirely different story to be told. 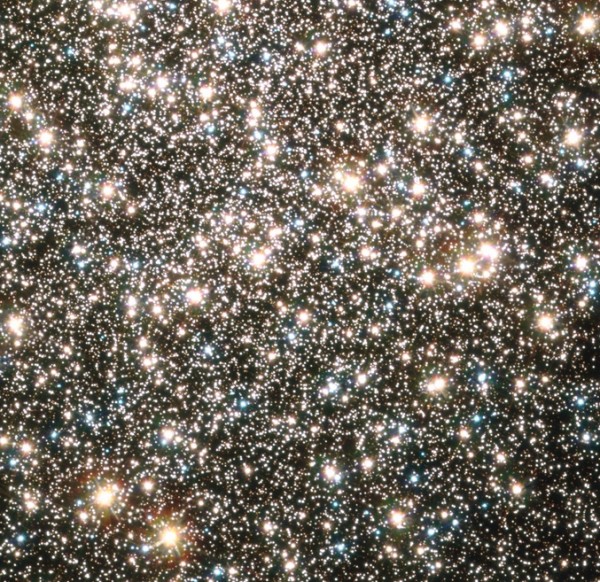 Despite the fact that these stars only have about 5% of the Iron content as our Sun, making it far less likely that these stars have habitable worlds than older stars like our own, this cluster has long fired the imagination of skygazing writers. As Kurt Vonnegut once noted,

Every passing hour brings the Solar System forty-three thousand miles closer to Globular Cluster M13 in Hercules -- and still there are some misfits who insist that there is no such thing as progress.

So enjoy Messier 13, one of the brightest and most spectacular objects in the night sky, and the perfect way to usher in the new year of 2013! 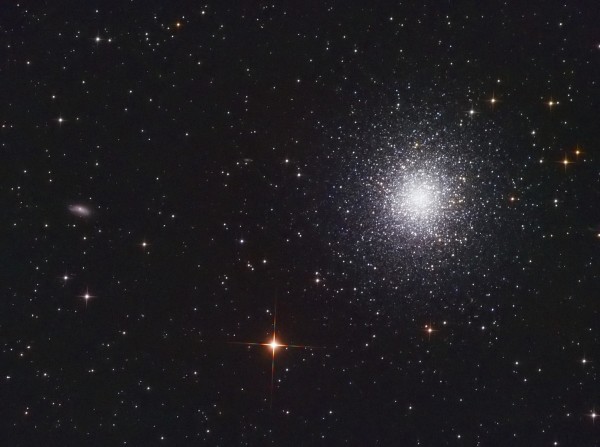 Happy New Year to one and all, and may the Universe continue to inspire you and fill your lives with joy!

Happy New year Ethan!! All the best to you and your family and all the readers here.

peace&love in 2013. Thanks to you too for learning me so much in a few months! Cheers Ethan!

Ethan, I'm not sure how planetary evolution proceeds in such a dense star cluster, but imagining life like ours somewhere within it, I wonder how the night sky looks to them, and if they have trouble seeing (or looking) beyond their cluster to the rest of the galaxy and the galaxies beyond.

M13 is one of the ones I think really need looking at in a big telescope so you can see the stars right the way down to the centre.

(note: globular clusters aren't likely habitats for rocky planets like ours. Too poor in silicate materials.)

I wonder how you find such wonderful quotes for every post of yours! :)

Ethan,
Thanks for another great astroblog-year, may your blog live long and prosper :-)
Similar to Wesley, I wonder what would an observer see from the cluster's core. I guess you wouldn't need any street lights during the "night" since the starlight would probably be more intense than our moonshine.
I also wonder what the core would do to the Earth gravitationally should the Sun sit say 5 LY away from the center. OK, maybe there are no rocky planets (is it really so even for younger stars there, even after so many supernovae preceding the remaining pulsars?), but wouldn't even a gas planet get kicked out of the orbit like in a giant pinball game with so many stars around?

Thanks for another great astroblog-year, may your blog live long and prosper :-)
Similar to Wesley, I wonder what would an observer see from the cluster’s core. I guess you wouldn’t need any street lights during the “night” since the starlight would probably be more intense than our moonshine.

Thanks for the fascinating artcle.
What's always puzzled me about clusters is that they seem to have no net angular momentum (hence the globular shape). But I'd always imagined that it's the angular momentum of systems like solar systems and galaxies that gives them stability and stops them coalescing.

I've clearly got this wrong, since they're fairly common, but the stellar dynamics within them must be hair-raising.