“Some days you go bear hunting and you get eaten. Some days you come home with a nice rug to roll around on, and bear steaks. What they don't tell you as a kid is that sometimes you get the rug and steaks, but you also get some nice scars to go with them. ...once you realize what can go wrong, it's a lot scarier to go hunting 'bears'.” -Laurell K. Hamilton

Some of the most incredible stories in all of human experience come from struggles against nature. One of the greatest storytellers in all of music, Slaid Cleaves, sings an incredibly (and tragically, like all of his songs) memorable one about Sandy Gray Falls: his masterpiece

Image credit: John Gomes of akjohn.com, via the Alaska Zoo at http://alaskazoo.org/.

Now I've had experience with chipmunks, squirrels, mice, crows, rats, and even raccoons as pests, but thankfully, never bears. But one restaurant in Colorado Springs didn't just get a visit from a Mama Bear, they encountered an unusually industrious bear that gave them more than they bargained for.

That's right. On the night of July 31st, the bear -- which they'd seen around the grounds before -- went out behind the restaurant and stole the restaurant's dumpster, eventually tipping the dumpster over in the parking lot and enjoying the spoils.

But it gets better (for the bear). Because the next night...

...the bear made off with the other dumpster!

As you may know, bears are incredibly wily creatures with outstanding senses of smell, and if you leave them a way to get to a food source, they will get there.

Image credit: the Get Bear Smart Society, via http://www.bearsmart.com/.

Fortunately, there are many resources out there for how to deal with bears, and the Colorado Division of Wildlife not only recommended using tack boards placed on top of the dumpsters to deter the bear(s), they actually provided the restaurant with the boards to do it.

Alas, for the bear (but fortunately for the restaurant), this was the end of the feeding frenzy. And there's a happy ending, too, for those of you worried about the possible impact of tack boards on an unsuspecting bear. 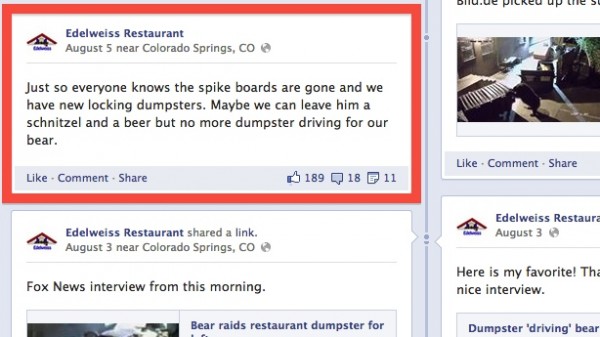 And that's our fun little diversion for this weekend. Hope you have a great one, and I'll see you back here on Monday for another dive into the Universe!

Believe it or not, bears are a problem here in suburban central Florida. We have to keep all our garbage in the garage until the morning of trash day. We have to bring in our bird and hummingbird feeders every evening. Two of them have been trapped and put down in the last week here in the Orlando area. We have had them go up into our neighbor's tree, scratch their backs on my wife's old S-10 pickup and drag trash from the neighbor's to our front porch for a nosh. One morning, while driving to work (I leave by 5:30 AM), three young bears strolled across the road at a striped pedestrian/bike crossing, suggesting some kind of ursine equivalent of the "Abbey Road" album cover.

I love seeing them even if they are a nuisance and prone to getting themselves in trouble. I know they were here long before I-4 and expect them to still be long after we are gone and forgotten. Good for them.