“One has to be an optimist; one has to hope that somewhere there’ll be new measurements to be made and that they will open up new vistas for us theorists to play with.” -Jim Peebles

It was one of the most hotly contested questions for decades: we first expected and then found supermassive black holes at the centers of practically all large galaxies. But how did they get there? 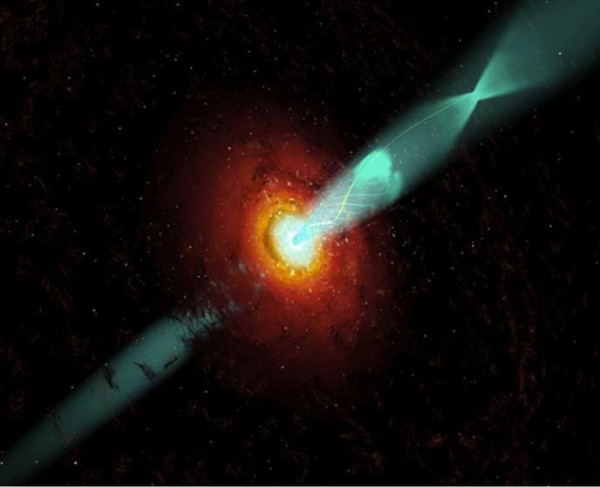 In particular, you could imagine it happening either way: either there was this top-down scenario, where large-scale structures formed first and fragmented into galaxies, forming black holes at their centers afterwards, or a bottom-up scenario, where small-scale structures dominate at the beginning, and larger ones only form later from the merger of these earlier, little ones.

Images credit: James Schombert of University of Oregon, via http://abyss.uoregon.edu/~js/ast123/lectures/lec24.html.

As it turns out, both of these play a role in our Universe, but as far as the question of what came first, black holes or galaxies, only one answer can be right. Go find out the whole story here!

* The universe started from a big bang about 14 billion years ago.
* The observable Universe stretches some 46 billion light-years in all directions from our location.
* Matter cannot move faster than the speed of light.
These points seem contradictory. How could the universe get so large in such a short time?

Is this not too dissimilar to how we think the solar system started, the sun first and then the planets?

That answer still feels unsatisfying. Are the BHs largely just accidental critters along for the ride, or are they fundamental to the formation of galaxies? There does seem to be a lot of evidence that BH feeding expels gas from galaxies, and so restrict the size/density, but are they in some way needed to form a galaxy at all?

Another aspect of BH feeding intrigues me. How much mass do BHs gain from dark matter and perhaps even dark energy. Just like a BH swallows photons, can in swallow dark matter/energy particles?

Re # 1 There is a theory called cosmic inflation, that occurred from 10**-36 to between 10**-33 and 10**-32 seconds after the big bang. http://en.wikipedia.org/wiki/Cosmic_inflation
In which observers move apart faster than the speed of light in that medium. This takes a non zero cosmological constant, "Inflation answers this question by postulating that all the regions come from an earlier era with a big vacuum energy, or cosmological constant. A space with a cosmological constant is qualitatively different: instead of moving outward, the cosmological horizon stays put. For any one observer, the distance to the cosmological horizon is constant. With exponentially expanding space, two nearby observers are separated very quickly; so much so, that the distance between them quickly exceeds the limits of communications. The spatial slices are expanding very fast to cover huge volumes. Things are constantly moving beyond the cosmological horizon, which is a fixed distance away, and everything becomes homogeneous very quickly."

@Craig #1: Let's take you're third point first. You're exactly correct that in relativity (both SR and GR) matter cannot travel faster than 'c' relative to a local observer. Cosmologically, this condition is met because the galaxies are "not moving" relative to local observers. There is some proper motion, for example of galaxies moving around in clusters, but that motion is fairly slow (a few hundred km/s).

The cosmological expansion doesn't involve "matter moving." Rather (as Ethan and many of us have explained in past postings and comments) the "fabric of space" (to use an old-fashioned term) is expanding, and the blobs of matter are just going along for the ride, at rest relative to their local region of space.

Because the expansion process applies identically to every unit region of space, larger regions expand over all much more than small regions. The effect is nothing more than a visual result of "the distance between two points doubles in a set amount of time:" two points one meter apart will be two meters apart after some time T; two points one km apart will be two km apart after that _same_ time T. This leads to exactly the Hubble rule for recession.

Why do we say the universe is "now" 46 billion light years in radius? That's just integrating the expansion from the beginning until now. Start with two nearby points at T=0, run the Hubble expansion for 14 billion years, and ask how far apart those two points are at the end of that process (i.e., now). The answer is 14 billion parsecs, or about 46 billion light years.

I hope galaxies were the first. I made my pet theory "Cosmic Segmentation". Or the light has the separation force. And so on.
http://www.geocities.jp/imyfujita/galaxy/galaxy01.html

Several years ago, a sharp dependency of size of central black hole and size of galactic bulge has been discovered. There was no explanation for it and it was discussed as large mystery. After a couple of years discussions about this theme vanished and I didn't note any solution. What the current state of if? Was it explained, or turns the dependency to be false?

My feeling about this subject is that after the big bang and the end of inflation the universe was filled with a nearly homogenous hydrogen and helium cloud with only very minute density fluctuations. these slightly dense areas were few and far between so when they gravitationally collapsed enormous areas would have been cleared out of matter and a single megastar would form around each of these few dense areas. Stars of this unimaginable size would burn out quickly creating supernovae that would blast matter out to the size of a galaxy. The after math of the supernova would create a super massive black hole at the center and produce a much less even distribution of matter than the big bang. With the black hole in the center and all other nearby matter removed the debris would circle around the black hole and form many new and much smaller main sequence type stars. So basically I agree with the top down approach more because the WMAP data seems to show density areas were more gradual and "small" in number rather than great in number to produce a massive amount of smaller stars. Besides the fact that smaller stars live longer and it would take longer than 200,000,000 years for galaxies to form this way.