“I didn’t know any successful actors in Kenya, so I felt like I could get away with going to college to study film more easily than I could with saying, ‘I want to be an actor.’ That’s what I did.” -Lupita Nyong’o

There's nothing that gets me excited quite like... completely fabricated, unnecessary bickering on the internet between two countries. I don't know why that is, but there's something both charming and addicting about the classic internet video where Kenya shoots jabs at Norway for no reason at all.

But did you know there's been a Norwegian response to it? In particular, a response to the Kenyan accusation of Norway's inferiority. 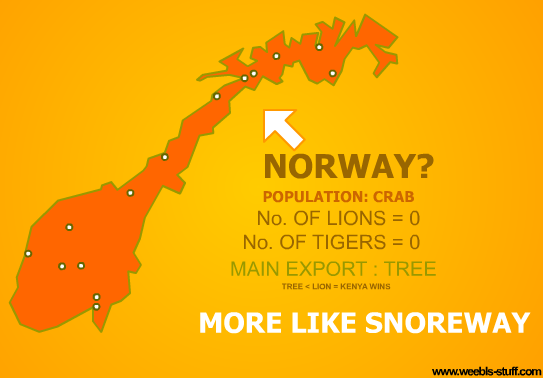 Image credit: screenshot from the original flash video at http://www.weebls-stuff.com/songs/kenya/.

And it's almost as hilarious for how bad it is, but also -- most probably -- for how satirically accurate it is as well.

Go check it out, and by all means, please, if you can: more unnecessary rivalries between countries!

There are infinitely more lions and tigers in Norway than 0; both species are represented in the country's main zoo in Kristiansand.
And Norway's main export is not tree, but oil and gas from the North sea. I am aware that this does not help the argument, because oil and gas < Tree.

That is nothing compared to the satirical Norway Song in a swedish TV program 1968, triggered by the frustration of Norway always getting all the medals in sports.
(Swedish language, the extreme rudeness is not translatable to English)
http://www.youtube.com/watch?v=m5bGaR2I4bI

Also, Spitting Image has a wonderfully rude German presentation of Britain that totally outshines this image.