“Most people are other people. Their thoughts are someone else’s opinions, their lives a mimicry, their passions a quotation.” -Oscar Wilde

What do you like? No, I really mean it: don't think about the things that you're supposed to like, or the things you'll admit to the world that you like, but really ask yourself the question. Do you, as Golden Smog would sing,

Because if you do, and you like something unconventional, there's a place for you. 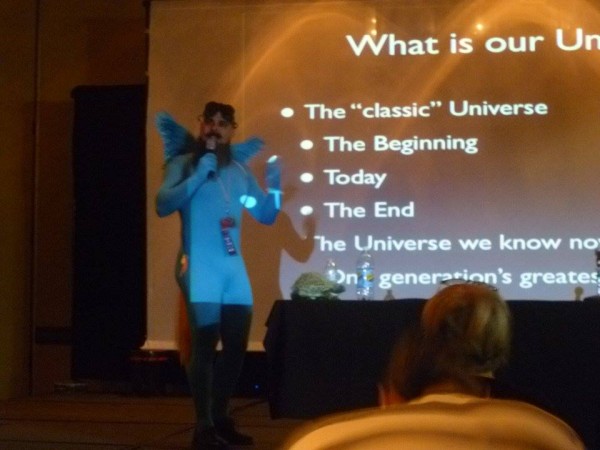 Image credit: Weezle, of me giving a talk on the Universe in full Rainbow Dash costume.

I don't mean college; I don't mean the internet; I mean a Con, or a sci-fi/fantasy convention. If you ever found yourself outcast or ostracized for being a fan of something considered dorky, nerdy or uncool, no matter what age you are, this is an environment you can put yourself in and immediately, you'll have yourself a home. 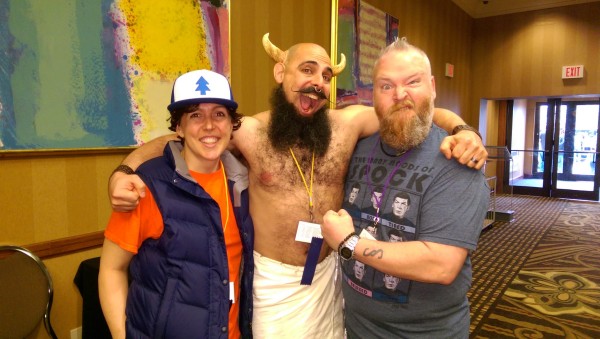 Come and find out why, and learn the stories of two young people who -- I sure hope -- got exactly the experience they would only have dreamed of.

Why? Because imagination is good. And if it's OK to consume art of whatever kind (music, fiction, film, etc.), it's even better to produce art, including the improvisational theatre of role-playing.

The social and emotional dynamics of this stuff are intimately personal and invoke aspects of human experience in which subjective and objective phenomena overlap and interact. In these ways they resemble religion, and shed light on the reasons why we consider bigotries about religion unacceptable, and why civilized societies do not infringe the rights of individuals to freedom of conscience and culture. One person's music may be another's noise, but all can coexist as long as none seek to dominate.

Re. the kid who got teased about liking My Little Pony: Good for you, Ethan, standing with him in solidarity. What you said was excellent. And in general, kids should be prepared to deal with peer pressure and conformity by asserting the right to think and feel for themselves, with confidence. That also translates to the ability to turn down peer pressure to engage in unsafe or illegal behaviors. Having confidence in oneself (or being able to act as if one does) is the element that will put a stop to the pressure and bullying, as well as setting an example for those who are susceptible to influence one way or the other.

I know next to nothing about My Little Pony aside from what you've described in a few of your columns here. But based on what you've said, it's a far better imaginal world to engage with, than something like Grand Theft Auto that role-plays violent criminal behaviors and rewards the attitudes that produce them. Good values in fiction and fantasy worlds, reinforce good values in everyday life. Our culture sorely needs more of this.

What's the cost of admission these days? I remember when caon were run by fans for fans. Beginning with Creation in the 70, more and more conventions were being run by big professional organizations for profit. While I'm sure there are benefits for some, it's a sad mirror image of what's wrong with America: run by corporations for their benefit above all others. I'm glad you were able to make something good out of it for some people.

G, GTA has never really appealed to me. Online play overall leaves me uninvolved, which is most of it, but when I consider what I'd play GTA to do, it'd be much the same role as I play in most CRPGs, a killer like the one in Hitman. A bounty hunter style sort of thing. Leaving violence where possible, but 100% willing to take the step.

And that would be rewarded by the game too.

Expecting GTA players to play violently and psychotically you assert they all will.

I have no expectations for others there, just like I don't have one for a boy who likes My Little Pony (which didn't stop me ribbing my brother for programming a level on Barbie Riding School. I mean, he's still my *brother*, right?).

Limiting others is an easy thing to do, because we can limit them to bad things but not feel bad about ourselves. It's lazy at best. A breeding ground for bigotry at worst.

We limit others to what we expect, because we feel better if we believe we understand the universe, and this is why denial is prevalent (and faith too): we don't look for the unexpected because it turns out we don't understand the world as we thought and it's now a scarier place than when be thought we knew what happened in it better. We look to confirm our expectations and evict or demote anything that disconfirms it.

Religion is one method many use to make the world "understood". And then it leads to people deciding that people should act like they expect, OR THEY ARE UNGODLY.

And you end up with WBC, ISIS, Northern Ireland and other atrocities.

They believe that others will act as they expect, look for proof they do, ignore evidence they don't and feel safer.

Being against GTA players is pretty small beer comparatively, but you could consider it a gateway drug to more extreme bigotries. Or just an indication you aren't as even handed as you hope to be.

But the best perfect is the one that tries.

It was 20 years ago this summer that I attended my first con - AnimeExpo95, for which I flew all the way across the country. And yeah, it was absolutely amazing to me, to be completely surrounded by people who were as big fans of something weird as I was, instead of being that one, or even one of those few, in my everyday life.

I was reminded of it during my favorite recent con moment. At this past New York Comic Con, while waiting in line to get some comics signed, the girl behind me in line - who looked to be about 11 - noticed my My Little Pony t-shirt, and her face just lit up. She says to me, "Are you a brony?!" And I go, "Yes, I am." And she just stares straight ahead and exclaims, more to herself than to anyone else, "I've found my people!" And I just burst out laughing - as much from sheer joy as from the humor of it, because I remember that moment!

As G said in comment #1 above, it's important for kids (and adults) to have confidence in their differences. Society would be really crappy if everyone were exactly the same, but there's constant pressure towards conformity. So kudos to you for helping him with that, and props to his mom for asking for your help. Too often the first person trying to make a kid conform is a parent, so I'm always thrilled when I see a parent supporting their kids' interests, even if they don't quite understand them themselves. (The mom in the above NYCC story gave me a look like, "I have no idea what's going on right now," but she was there, and seemed happy that her daughter was happy.)

Yup. Cons are one of the best places for people who don't fit The Stereotype (whatever that stereotype is that people keep trying to jam you into) to find themselves. That story you tell about the 12 year old girl hits home for me, since i've seen that, and the brony situation, happen numerous times over the years. Yours are a bit more stark in comparison though, which is extra satisfying :)

Were it not for Gencon, i doubt i ever would have overcome my social anxiety, had meaningful friendships and dating relationships, accepted my rubenesque self as being semi-attractive, agreed to take on a direct report at work, or had the bravery to try out for roller derby 5 years ago thus resulting in me now being a league owner.

Sure, that's a lot of results to place on one Con, but it's more the atmosphere and culture of cons in general. I can look back at my life and realize that the skills and support i was lacking were first present in the gaming industry. I was lucky enough to find the strength to build on them myself and make myself successful instead of hiding in my cave for another 20 years.

I should attend one of those as a Bible thumping Christian.. we are becoming quite the outcast.