“Since man, fragment of the universe, is governed by the same laws that preside over the heavens, it is by no means absurd to search there above for the themes of our lives, for those frigid sympathies that participate in our achievements as well as our blunderings.” -Marguerite Yourcenar

Galaxies are everywhere we look in the Universe, clustered together in groups and separated by voids. It stands to reason that if we look beyond the local group, one of those galaxies would have to be the brightest. But the one that is turns out to be most unusual. 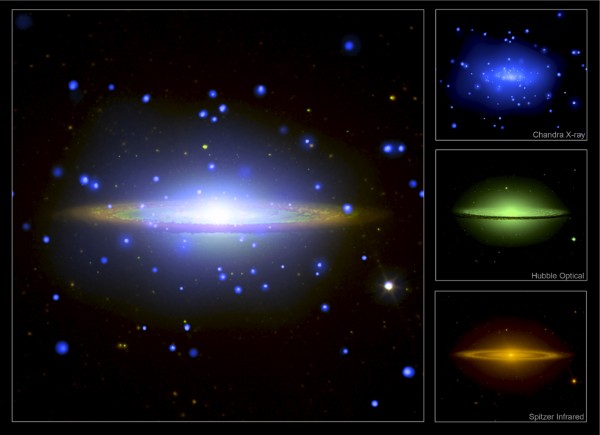 Only half the diameter of the Milky Way but with more than twice as many stars, the Sombrero is both an elliptical and a spiral galaxy all in one. And thanks to Hubble and some incredible image processing, we can actually separate out the bright, elliptical component and view the spiral all on its own. 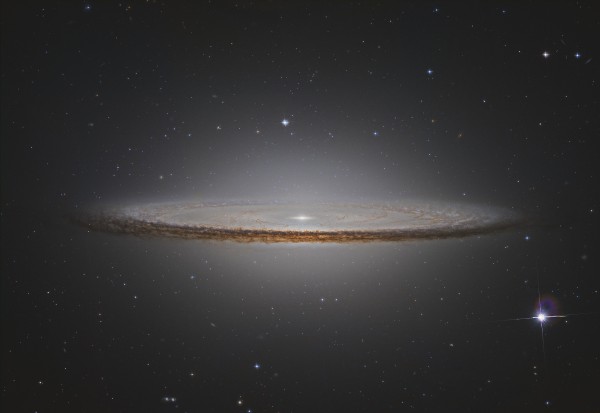 Go get the most incredible views of this galaxy, ever, on today's Mostly Mute Monday!

WOW Amazing, the beauty of the Big bang..... i wonder if there is a habitable planet in that universe!

Fabulous photo's as we come to enjoy.

Is it possible the Sombrero is still forming from its own accretion disc, rather than from interaction with another body?

This is very informative, some of us do not know if a galaxy like that existed. The comparison of this galaxy to the Milky Way form a source of understanding about this galaxy.It is also fascinating to find that we actually have large galaxies besides the known once. I also found out that it has Black Holes as its heart, which left me astounished.

It is miraculous to know that these galaxies exist and that life may exist in one or more of the many galaxies out there. In 1929, Edwin Hubble, an astronomer at Caltech, discovered that the universe is still expanding. The discovery was based on the Doppler effect which the Redshift is an example of. The Redshift basically means that when observing the universe, it can be determined whether stars or galaxies are moving away or toward us by looking at the color that you see. All colors have different frequencies and thus makes it possible for us to determine whether the galaxy is expanding or not.

And what a magnificent Sombrero it is! I was wondering, what is it about this galaxy allows it to have so many stars? As it is much smaller than the Milky Way, I would imagine it to have less stars, and also less matter available to form stars.

Learning about this galaxy has really got me thinking about how big the universe actually is and if it ever ends. I also ask myself the question how much of the galaxy have we actually explored? And how much more is there for us to explore? I would love to see what other people have to say about my questions that I have presented. 15019838

Just the thought of how many of these bright galaxies are in existence beyond our local group, is overwhelming. But is it totally impossible to see the ones that aren't as bright as the Sombrero?
[15059872]

This is amazing! the Sombrero is beautiful and every other galaxy has its own unique beauty , thanks to NESA we all have the privilege and pleasure to see these pictures, this brings to my mind the power of lights and all its properties of being absorbed and reflected that we get to see these galaxies with all their varying light frequencies, this will surely make learning about astronomy very interresting

Wow, how extraordinary! It astonishes me that there are such beautiful galaxies around our little one. Most of us are so trapped in this little world that we don't even notice how far beyond our own knowledge this universe expands. It is amazing that so many galaxies can be observed and it would be so great if, one day, we will be able to see everything live. Thanks so much for sharing all of your findings.

It's times like these when you just have to marvel at the concept of physics. I wonder how many stars are in the Sombrero galaxy. It's even visible with an ametuer telescope, which I

More needs to be discovered about this amazing Sombrero galaxy...15179690