“[I]f there were no light in the universe and therefore no creatures with eyes, we should never know it was dark. Dark would be without meaning.” -C.S. Lewis

The Universe had two periods where light was abundant, separated by the cosmic dark ages. The first came at the moment of the hot Big Bang, as the Universe was flooded with, among the matter, antimatter and everything else imaginable, a sea of high-energy photons, including a large amount of visible light. As the Universe expanded and cooled, eventually the cosmic microwave background was emitted, leaving behind the barely visible, cooling photons.

It took between 50 and 100 million years for the first stars to turn on, so in between these two epochs of the Universe being flooded with light, we had the dark ages. Yet the dark ages may not be totally invisible, as the forbidden spin-flip-transition of hydrogen may illuminate this time period after all. 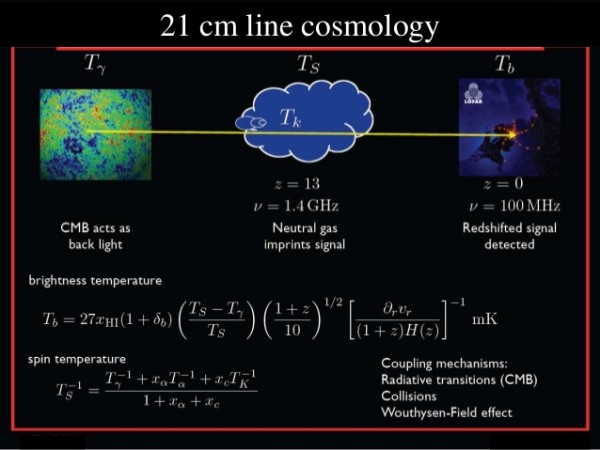 Image credit: Gianni Bernardi, via his AIMS talk at http://www.slideshare.net/CosmoAIMS/cosmology-with-the-21cm-line.

Come get the whole story on this week's Ask Ethan!

I LOVE "Starts with a bang! Thanks for consistently writing such clear and informative articles on a regular basis.

"When the Universe expands, it cools as well, since the amount of energy in a photon is inversely proportional to its wavelength: stretch the photon’s wavelength as the Universe expands and the photon will cool."
Given the of the concept of the expansion of space "lengthening" the wavelength of the light and given your illustration of the balloon analogy, the X and the Y and the Z axis would all stretch the same amount as space expanded and therefore the frequency would not change. If the frequency changes with the expansion of space you need a different illustration as the current one does not fit your conclusion.

Quote “[I]f there were no light in the universe and therefore no creatures with eyes....."
If there was no creatures (conscious aware sentient beings) then there would be no Universe as we know it ..no observer = no Universe.
....Dark would be without meaning.” –C.S. Lewis"
There is no such thing as darkness, that is just what we call it. It is simply space that is void of light.
Nice quote but nonsense in the 21 Century :)

Thanks very much for the informative and fascinating article. I learned many things, but...

Please PLEASE retire "incredibly" from your vocabulary, unless you really mean for me not to believe a word of what you say.

You used it a total of four times in https://medium.com/starts-with-a-bang/ask-ethan-89-the-universe-s-dark-…

That's not the only meaning of incredible, Marc.

Before upbraiding others for use of the English language, please check you're using it right yourself.

Otherwise you look like an ass and I really won't believe a word you say.

the X and the Y and the Z axis would all stretch the same amount as space expanded and therefore the frequency would not change.

Yes it would. For exactly the same reason as when you stretch a spring, the wavelength of the spirals making up the spring gets bigger. Quite why you felt you had to include all three axises on a subject that is linear and therefore can be explained entirely by rotating your coordinate until the longitudinal wave (the photon) is entirely along a single axis, therefore not perturbed by a change in any of the other axises, escapes me.

Unless you think that the wave of light is transverse, like the wave on water.

Wow:
Stretching a spring is not the same as space expanding. A spring stretches "in space" where as, when space expands it does not stretch along a single axis. Space is three dimensional and its expansion is as such. If space expands then there would be no apparent change in a wave form over time; it's all relative isn't it?

Wow, thanks so much Ethan. Imagine my excitement logging in today to find my very own 'Ask Ethan'!
There's lots of stuff here that I've not read before, and I'm looking forward to going through it all a few more times to get the gist of everything. Made my day!

"Wow:
Stretching a spring is not the same as space expanding."

Correct. That is why it is an *analogy*. If it were the same thing, it would be called "identical"

Do you know what an "analogy" is?

a similarity between like features of two things, on which a comparison may be based

when space expands it does not stretch along a single axis.

But only one of those axises is relevant to light. It's not a transverse wave.

Ergo, rotate the axis and then your x or y or z, but none of the others, becomes the one that the wavelength is stretched over.

And the problem reduces to a one-dimensional problem.

If space expands then there would be no apparent change in a wave form over time;

it’s all relative isn’t it?

Well, you don't understand what that means, do you.

That statement you made there was meaningless. It doesn't say WHY you claimed that "there would be no apparent change".

Hence the conclusion: you haven't a clue what you're talking about. But are damned sure you "know" it.

Here's some junior school maths for you.

What is the ratio between the two lengths?

Go on, you have a computer there, open up "Calc" and type the numbers in.

Wow:
Space does not expand locally during inflation. Space, here, means everything. Photons included. Particles do not exist outside of space. When everything expands at the same rate everywhere then everything stays the same. I mentioned things being relative because the size, of the universe, does not matter. Einstein said matter and energy are equivalent. It does not make any difference what type of wave we are talking about since space is three dimensional plus time. Points on a balloon do not, as some say, just move apart but they also get larger and therefore all spatial relationships remain congruent at any given time across the expansion. Inflation was instantaneous. If matter and energy are just "things" pasted or hanging on or in space then yes. What do you think space is? Mattergy equals space. What's more interesting is "where" is space?

"Space does not expand locally during inflation."

Yes it does. If it didn't,it couldn't expand universally, since the universe contains all local areas in one. Hence the name.

It's the distance between things, not the things themselves. Technically, the *metric* of space.

This, you see, is your problem.

You don't understand science and have problems with your misunderstanding, and rather than attribute that to yourself (your ego won't like it), you attribute it to science instead.

You have it wrong.

Oh, by the way, did you do the maths there?

Or was the sum too hard for you, since it had a square root in it?

Wow:
You are confusing the expansion of the universe with inflation. They are two different things. When the universe expands then yes, things get further apart.

By "locally" I mean that expansion was uniform everywhere and not a local phenomena.

Try thinking of it this way, though. If you stretch the space through which a photon travels, you also stretch its wavelength. Since the speed of light is a universal constant, and you've increased the wavelength, what happens to the frequency? Remember speed = frequency * wavelength for any wave.

Hmm. Chelle got precisely the same idiocy stuck in her head.

Are you actually Chelle, John?

"You are confusing the expansion of the universe with inflation"

"By “locally” I mean that expansion was uniform everywhere and not a local phenomena."

How the hell does that rescue your claims from the dustbin of stupidity?

Rhetorical question, dear. I know it doesn't. In the least.