"Studying whether there's life on Mars or studying how the universe began, there's something magical about pushing back the frontiers of knowledge. That's something that is almost part of being human, and I'm certain that will continue." -Sally Ride

If you came to the Solar System some 500 million years after its formation, you would've found two world with oceans of liquid water, continents and all the conditions we know of for life to begin thriving: Earth and Mars. But unlike our own world, Mars' organic history was cut short when it lost its atmosphere and became a barren, desert wasteland.

While we had some pretty compelling theories as to how this happened, it was only with the advent of the Maven mission and its first science results that we discovered exactly how, how fast and when Mars lost its atmosphere. One cool discovery: aurorae appear diffuse and all over the entire night sky on Mars! 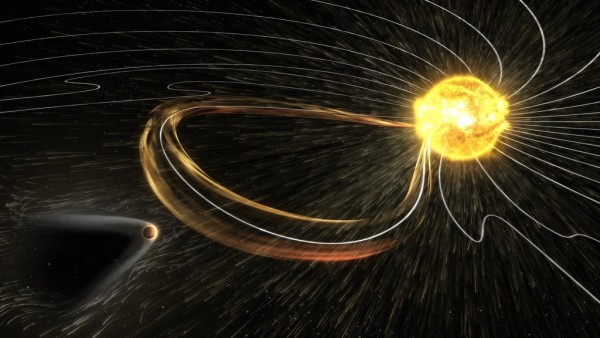 Go read the whole story over at Forbes.

However, at some point less than a billion years after Mars formed, its global magnetic field ceased to be, removing the planet’s main source of protection from the solar wind.

Is there a current explanation for how this happened?

The great news is that Maven is performing not only exactly as expected, but in some ways is even exceeding its design efficiency, much like the Opportunity rover.

A fact which is precisely the opposite of what the anti-science folks on the right would have us believe NASA is capable of.

However, at some point less than a billion years after Mars formed, its global magnetic field ceased to be, removing the planet’s main source of protection from the solar wind.

Is there a current explanation for how this happened?

Giant impactors appear to be out in front (PDF).

"Is there a current explanation for how this happened?"

Was that deliberate? :-P

Thanks Narad - will look at that pdf.

I wish I were clever enough today, but I'm not. Clumsiness and a hike in a new woods, with hills, combined to lead me to a sprained knee last night. The left-over discomfort from pain coupled with the lingering feeling of stupidity has numbed my thoughts all day today.

^ More specifically, these seem to include screwing up convection (1) at the core–mantle boundary as result
of mantle heating and/or (2) through shock-based core stratification (Arkani-Hamed).

My comment is not belittling the manufacture and operational achievements of space agencies.
As I say to NASA, Good data, but the rest is good for followers. If mankind correct their understanding of planetary evolution. They will see mars and other’s present condition is normal for the stage of their evolution. Their current model is fiction and incorrect. That is why there is no coherent space policies. Just like a blind they feel their way forward. If they have correct version they will be able to plan for useful goals rather than scientific curiosities. Each time they pronounce new discovery, if it is correct it is re-Inventing the wheels again. Secret services have been watching me past 40 years, but the leaders have not been intelligent to ask for information officially. The correct version in my 1975 Bremen summer house notes or by official request. MG1

"My comment is not belittling the manufacture and operational achievements of space agencies."

Who knows WHAT it is doing? You certainly didn't make any attempt to make that clear.

And what on earth made you defend THAT accusation, since no such accusation was made in any shape or form?

"Secret services have been watching me past 40 years"

More fractured pseudo-english, this time obviously from a conspiracy nut.