"Lots of science fiction deals with distant times and places. Intrepid prospectors in the Asteroid Belt. Interstellar epics. Galactic empires. Trips to the remote past or future." -Edward M. Lerner

Of all the asteroids we've ever discovered, it's arguably the very first one, Ceres, that's got the most to teach us. Currently being mapped at higher and higher resolution by NASA's Dawn Spacecraft, Ceres isn't just the largest asteroid we've got, it's also one of the least inclined, orbiting the Sun with a tilt of just 3 degrees. 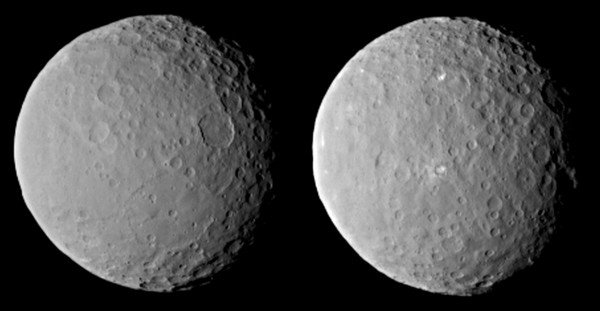 This means, much like the Moon, that there's a chance it has permanently shadowed craters at its poles, possibly containing volatile materials that have boiled off everywhere else on the world. Yet within these permanent shadows, relics from billions of years ago may still persist.

Come find out what might be in there on today's Mostly Mute Monday!

I view your blog on my iPad. Thr link to the Forbes site never gets past the welcome to Forbes page.

It works on my iPad both in Safari and Chrome. After a short while it continues from the "greeting page" to the Starts With A Bang page automatically but if I want to I can tap on "Continue to site>" to do the switch earlier. (In my case an iPad Air 2 running the iOS 9.1, if that is of any importance.)