How do we know the age of the Universe? (Synopsis)

"Nobody grows old merely by living a number of years. We grow old by deserting our ideals. Years may wrinkle the skin, but to give up enthusiasm wrinkles the soul." -Samuel Ullman

When it comes to the Universe, there are some dead giveaways as to what its age is. Its elemental composition changes, the types of stars that are present evolve, the large-scale structure visible to us morphs, grows and ceases, and the temperature of the cosmic microwave background drops, among many other signs. 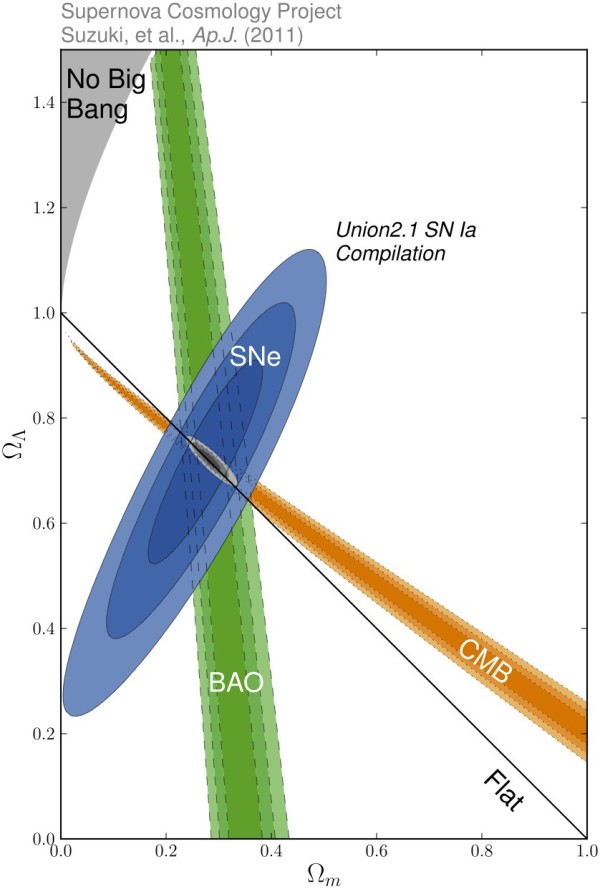 Yet when we put them all together, there are only two methods available to measure the age of the Universe: the measurement of its expansion history and the measurement of the age of the oldest stars. The first is by far the more accurate, at 13.81 billion years (plus or minus just 120 million), while the second validates that picture, with a maximum age of 13-to-14 billion years.

Go learn the full story, plus how we arrive at that number, over on Forbes today!

Ask Ethan #99: How do we know the age of the Universe? (Synopsis)

The Greatest Cosmic Puzzle: Astronomers Find Stars That Appear Older Than The Universe

"The older you get, the more you realize that the way you look is a reflection of how you treat yourself." -Hope Davis Age may be just a number, but in cosmic terms, there are some rules it’s pretty important to obey. It should be impossible to have a complex creature that’s older than the planets…

Inflation, Dark Energy, and the Physics of Spacetime

"Orbiting Earth in spaceship, I saw how beautiful our planet is. People, let us preserve and increase beauty, not destroy it!" -Yuri Gagarin Fifty-two years ago today, the first human being left Earth, and we began our journey into outer space. But back in 1961, we didn't really know how far outer…

What is dark energy?

“Under the laws of General Relativity, if you have a Universe like ours, which is:
1) of uniform density on the largest scales,
2) which has the same laws and general properties at all locations,
3) which is the same in all directions, and
4) in which the Big Bang occurred at all locations everywhere at once,
then there is a unique connection between how old the Universe is and how it’s expanded throughout its history.”

Well, if the carnival performer insists on continuing to bark this stuff, then I feel obligated to bark back:

Point 3) is objectively false, for the same reasons as 1) is.

Also, regarding this “uniform density”, which I’ll take the liberty to call “homogeneity” (i.e. one of the assumptions of Big Bang Theory),
I’m assuming that the 7th image in your Forbes article – the orange and blue ellipse – is supposed to represent some aspect of the homogeneity of the universe.
But can you imagine looking into a glass of supposedly homogenized milk and seeing the un-homogeneous clumpiness of figure 7?
What would you do?
I know what I’d do: I’d throw it out.
..…………..
Now, point 4) is a relatively new lame duck.

But now I think you’re saying that what actually emanated from the teeny tiny point was a pre-Big Bang Inflation, and then, when the universe was much, much bigger than a teeny tiny point, it went POP!
But this pop (i.e. Big Hot Bang?) occurred at all locations everywhere at once…for some reason.

I think most people might not readily agree to that.
Those outside the carnival, I mean.
…………………
Ethan: “This means we’re confident in the age of the Universe to 99.1% accuracy, which is an amazing feat!”

I would think that you’d think this was amazingly disturbing. Because this would mean you might be off by 0.90%!
That’s over four times higher than, well,
see, in an earlier blog, you said that
““false alarm probability” of 0.22% is actually quite high, for physics standards!”
…………….
Ethan, do you have any pictures of you in clown makeup?

sn, the real question is whether you have any support for your objections that hasn't already been shown to be nothing more than your lack of understanding and misrepresentations?

Just double checking here, but does SN believe the universe is ~10,000 years old?

You don't understand either the word "density" or "scales."

Good grief. I can safely say the water in my glass is of a uniform average density, even though most of the mass is concentrated into tiny nucleons surrounded by relatively vast stretches of space, and there are doubtless small temperature variations.

S.N. resents things that are beyond his grasp. The simplest answer to his making an ass of himself over homegeneity is to observe that it follows directly* from isotropy unless the observer is in fact the center of the universe.**

There is no detectable CMB anisotropy above the scale of the distance to the surface of last scattering. End of story.

* Nonperturbative FLRW only? Any help appreciated.
** Or can specify its location.

I’m assuming that the 7th image in your Forbes article – the orange and blue ellipse – is supposed to represent some aspect of the homogeneity of the universe.
But can you imagine looking into a glass of supposedly homogenized milk and seeing the un-homogeneous clumpiness of figure 7?

* I think that's the contrast enhancement on the final image.

^ Heh, silly me, the raw-milk branch of Sally Fallon's crank collective has done it at 4200×.