"What's really exciting is what comes next. I think we're opening a window on the universe -- a window of gravitational wave astronomy." -Dave Reitze

On September 14, 2015, LIGO directly detected gravitational waves for the first time, from the inspiral-and-merger of two quite massive black holes. Despite the fact that no electromagnetic radiation signal was expected, the Fermi GBM instrument measured a high-energy X-ray event just 0.4 seconds after LIGO’s 200 millisecond detection occurred. According to NASA scientists working on the Fermi mission, there was just a 0.2% chance of a false positive.

Image credit: ESA–C.Carreau, of the "ripple" effect on spacetime that a passing gravitational wave imparts.

In a new paper out today, however, a reanalysis using a superior statistical method shows that the 0.2% chance is, in fact, true, and that LIGO’s black holes didn’t have an electromagnetic counterpart after all. This new statistical technique will be incredibly useful down the road for discriminating between robust astrophysical signals and spikes in the noise that have hitherto been a source of incredible confusion. 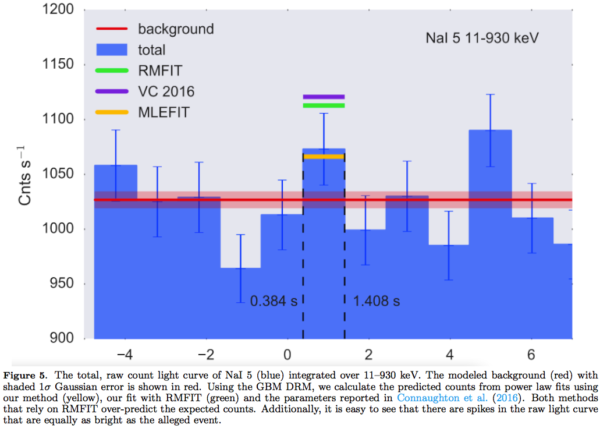 Go get the full story on the latest development in understanding the very first directly detected gravitational wave!

Even though it lines up with theory, I'm always skeptical when someone p-hacks a new result out of old data. That goes double when it is only a single event that is being examined. While true that so far we have only seen the published details on one black hole merger, these mergers are supposed to happen all the time. Lets get 5 or 6 or a hundred and see what we see.

Are you saying the headlines from widely-read publications like the New York Times (“Gravitational Waves Detected, Confirming Einstein’s Theory” – 2/11/16)
as well as from more science-savvy but less widely-read sources like this https://www.ligo.caltech.edu/news/ligo20160211

Are you saying the headlines from widely-read publications like the New York Times (“Gravitational Waves Detected, Confirming Einstein’s Theory” – 2/11/16)
as well as from more science-savvy but less widely-read sources like this ... were premature?

No. You would understand this if either (1) you looked at the blog for any reason other than finding onanistic trolling opportunities or (2) were able to read for comprehension.

I doubt that this result comes as much of a surprise to anyone, nor that it wound up being a perfectly elastic collision with your head.

One might further wonder just how often S.N. relies upon pretending at personal inerrancy and hoping for unmarked graves.

But what does this mean? The gravitational waves didn't exist? Or does it simply mean the X-ray event didn't happen?

But what does this mean? The gravitational waves didn’t exist? Or does it simply mean the X-ray event didn’t happen?

The latter. There's another post (by second author Burgess) here.