"Mozart's music is like an X-ray of your soul - it shows what is there, and what isn't." -Isaac Stern

When supermassive black holes have a large amount of matter fall onto them, they accelerate a large amount of the ionized material -- particularly electrons -- into high-velocity, bi-directional jets. In many cases, those jets of material collide with previously blown-off gaseous material and create high-energy X-rays. 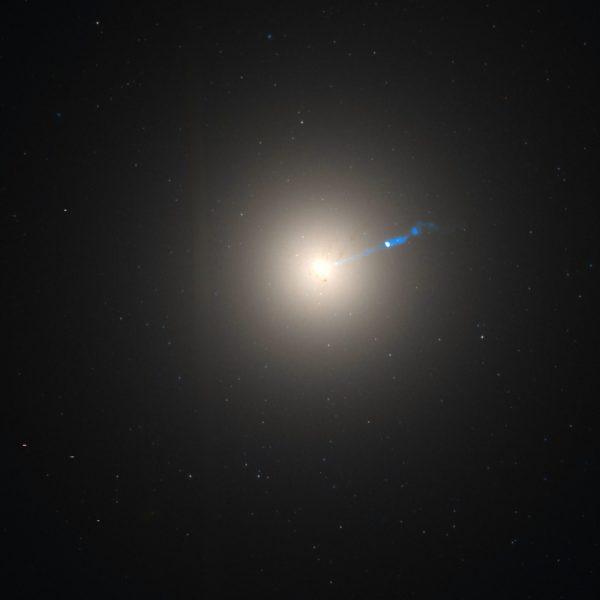 A black hole more than a billion times the mass of the Sun powers this X-ray jet that's many thousands of light years long. Image credit: NASA / Hubble / STScI / Wikisky tool, of the nearby giant elliptical galaxy, M87.

While these can often be visible across the cosmos, it’s very rare to have a jet so large. The galaxy Pictor A, imaged by Chandra over a 15 year timescale, has the longest known such jet at 300,000 light years, culminating in a “hot spot” shockwave, where the electrons collide with the gas at greater than the speed of sound. A counterjet, invisible with all other telescopes, was also found by Chandra. 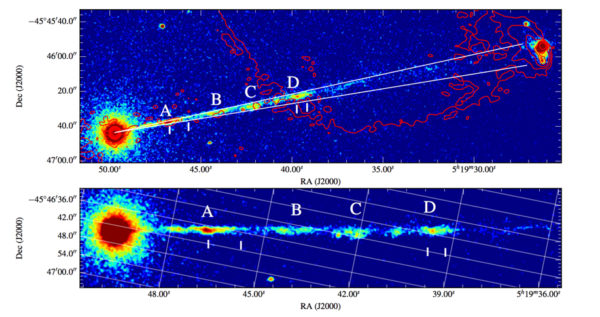 Go get the full story in 200 words, pictures and video (!) on today’s Mostly Mute Monday.

@Ethan: Is the apparent "misalignment" of the eastern radio lobe with respect to the jet axis merely a visual artifact? The western lobe appears to have its symmetry axis aligned well with the faint counter-jet, but the eastern lobe seems to be substantially north of where it "ought to be."

The western lobe appears to have its symmetry axis aligned well with the faint counter-jet, but the eastern lobe seems to be substantially north of where it “ought to be.”

Do you have east and west reversed here, or do I? R.A. decreases from left to right in the bottom figure.

@Narad #2 -- It's probably me who is confused! I think I got "north" correct, as the declination (Y axis) is negative, but increases (gets closer to zero) upward on the page.

...And I just read the Wiki on RA. It increases eastward, so as you say, the plot above has "east" to the left and "west" to the right.

Okay, so I don't understand astronomical displays. Is the image shown supposed to "look like" what I might see on the sky itself? Or is it "upside down", the way it would be looking through a simple telescope?

Yes; the celestial sphere viewed "from the inside looking out." I hadn't had any coffee at the time, though, so I wasn't completely sure even after skimming the Hardcastle preprint (arxiv_org/abs/1510.08392).

^ OK, I'm procrastinating on something anxiety-producing, so I'm just going to pretend that there are actually lurkers and try to spell this out, since my own intuition seems to be sluggish today.

I think I've got it: RA increases eastward (driven by the rotation of the Earth and our longitude convention), which makes RA/dec a proper, right-handed coordinate system when viewed "from the outside" (i.e., the way it would be drawn on the surface of the earth). But (for obvious reasons :-) we draw astronomical objects as viewed from within the sky, which flips the orientation of the RA axis.

Hopefully I'll remember all this the next time it comes up (and also avoid using "east" and "west" with regards to astronomical objects :-).

The alignment seems a bit clearer in a set of earlier (1997) multifrequency VLA observations (PDF), but what's left of my understanding of radio astronomy ends before being able to physically interpret these data.

Mike, problem with RA and so on is that you generally don't get information on what you're seeing. If done "right", the image will be reformed into one that concurs with what Narad has pointed out.