"A careful analysis of the process of observation in atomic physics has shown that the subatomic particles have no meaning as isolated entities, but can only be understood as interconnections between the preparation of an experiment and the subsequent measurement." -Fritjof Capra

For most living humans on the planet, the Standard Model and General Relativity, the theories that govern the four fundamental forces, have encompassed all of the known particles and their interactions for our entire lives. We know they can’t encompass all there is, but the search for the first particle beyond the Standard Model or the first force/interaction beyond the four known, understood ones has been elusive. 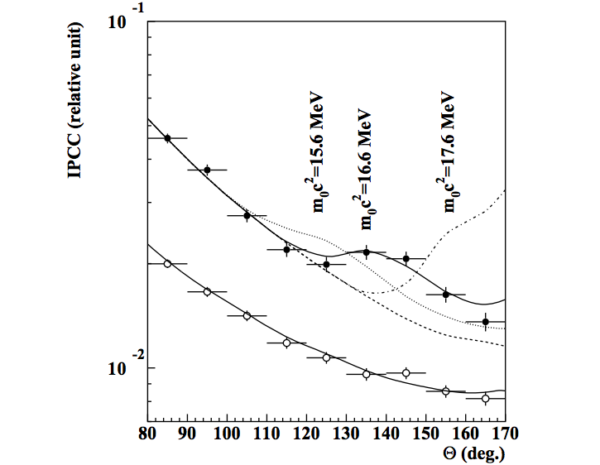 Ironically, it might not be a high-energy experiment that reveals the next step in understanding the fundamental nature of reality, but a low-energy, high-precision one. Last year, an experiment looking at the decay of an excited state of beryllium-8 noticed an excess of events at a particular electron/positron opening angle, perhaps indicative of a new particle and a new force. If the results hold up, this could change everything.

A schematic of Feng et al.'s hypothetical scenario for the creation of a protophotic X-boson. Image from 1608.03591., created by Flip Tanedo at http://www.particlebites.com/?p=3970. I recommend reading Flip's entire post for an in-depth look at the possible scenarios, as he's a coauthor on the Feng et al. paper!

But will they? And should we expect them to? That’s, perhaps, the real question, and here’s the answer!

This may be *must* reading, especially for scientists who humbly consider their mission
“understanding the fundamental nature of reality.”

One of the “musts” for me was:
“About two weeks ago, the internet went crazy when Jonathan Feng et al.’s paper was published…
But…
the Hungarian team’s results need to be replicated, and this is a team that’s been notorious over the years for claiming new particles that have gone away with more data.”

Also,
“It’s far more likely that theorists are building a model to chase a phantom particle that doesn’t really exist.”
……………..
It’s all so interesting, so important, so *applicable* to everyone’s everyday lives.
Not.

Reminds me of a maybe “must” I read recently:
“Academic science, especially, has become an onanistic enterprise worthy of Swift or Kafka."
http://reason.com/archives/2016/08/26/most-scientific-results-are-wrong…

By the way sn, after your numerous comments that you couldn't post at Greg's site any longer because you were banned, I see you have one of your typical "global warming doesn't exist" comments there today.
a) Is there any science you aren't wrong about?
b) As predicted, your claim that you were banned from there was another of your lies.

The Proton Radius Problem and the Muon.

These discrepancies from standard model predictions in nuclei charge radii when muons orbit them fit in nicely with both the unexpected muon anomalous magnetic moment and my theory of LENR involving electron based spin waves as a source for the fifth force of nature.

Researchers have just discovered a possible new force carrying particle(boson) whose creation as a virtual particle in the vacuum would explain why the muon is precessing so much more than the Standard Model predicts.

The increase in the magnetic moment of the muon over what the standard model expects would explain the reduced charge radius of the nuclei that the muon orbits.

If this new magnetically charged boson causes increase precession in the magnetic moment of the muon then symmetry would predict that electron precession would generate this new boson and/or increase it power level.

Neutrino physics seems to be just about the only particle physics these days that is reaching beyond the Standard Model. The original Standard Model has it that neutrinos have no mass, but it's been shown that they do have mass. All explanations for the origin of neutrino mass (either via the Higgs mechanism or by considering them as Majorana fermions) seem to require the postulation of a right-handed neutrino, which is so far unobserved.

Just to add, if neutrinos are actually Majorana fermions, that would mean that the right handed neutrinos are actually the anti-neutrinos. That also means that neutrino-less double beta decays could occur, and several other phenomena that violate lepton number conservation as well. None of these have been observed with a sufficient degree of confidence though.

Ethan;
Please reconsider the decision of not banning SN from posting. (I have been a reader since 2009, but have refrained from posting before now. )

I find that I can't read the comments anymore - if I see the name "See Noevo" I have to leave the page...

And to the rest - ignore SN, please ? Just don't argue with the idiot troll.

I suppose the discovery that certain atomic nuclei exist in two different energy states when placed in a strong magnetic field is similarly lacking in practical value, so efforts to understand and quantify this effect are worthless. I suppose also that the discovery that subatomic particles can penetrate energy barriers even though the particle's energy is less than the barrier energy is similarly worthless.

I know, I know. God did it; that's all we need to know. I suppose if we had just prayed hard enough instead of developing the basic scientific knowledge needed to make technological developments like MRI devices and the computers needed to process the data from them so that we can do useless things like detecting cancerous tumors much earlier than ever before possible and thereby doing worthless things like saving people's lives, God would have just provided the MRI's and computers instead.

“I suppose if we had just prayed hard enough instead of developing the basic scientific knowledge needed to make technological developments like MRI devices … God would have just provided the MRI’s and computers instead.”

Actually, God expects us to do both – pray AND work.

And a good example is this guy.
Thank God for God-fearing Creationists like the amazingly-accomplished inventor of MRI technology,
Raymond Damadian:
http://www.icr.org/article/raymond-damadian-inventor-mri/

Thank you for providing me my best laugh of the day.

Now, back to your Nordic safe space.

P.S.
Even if the National Science Foundation would consider me a “troll”
(and given it’s the evolution/global warming-loving NSF, they almost certainly would),
I *should* be safe from their desired designs,
given I’m just an army of one.
http://freebeacon.com/issues/feds-spend-499571-combat-online-trolling/

How can God expect us to do anything when he isn't even real? Stupid comment if you ask me.

It's deeply stupid in more than one way, but I don't think simply asserting monist materialism adds anything. Instead, one could observe that S.N. completely missed the point, which is that basic research – the imbecilic mocking of which is a large part of S.N.'s stock in trade – precedes applications.

The evasion itself that is supposed to substitute for a cogent reply is also mind-numbingly bad. I can practically see S.N. scurrying off to search for "mri"+"creationist," given how often he's evidenced this ersatz version of thought.

C'mon, "inventor of MRI technology" and a link to ICR? Nothing against Damadian, but that last word is either superfluous or blobspeak for "character in Act III" of a rather long play* that S.N. couldn't care less about.

Hell, if the subject is MRI, one could even press him on whether it's possbile for mankind to run out of helium before the Second Coming – it could be an amusing extension of his avoidance* of the question whether extinction-level events are physically possible.

* In terms of script development, I'm only as far as having either Stern or Gerlach burst into a room and yell, "I told you to turn off that damn Jacob's ladder!"

^ Rats, there should have been two footnotes; change to "avoidance**" and add this:

** I don't feel motivated to check whether he's forced himself into the position.

God would have just provided the MRI’s and computers instead.

He'd just be undercut by some Asian god. I don't know whether Santa Claus would even be in a position to serve as liaison.

"The original Standard Model has it that neutrinos have no mass, but it’s been shown that they do have mass"

Which is why you had to call it the ORIGINAL Standard Model. So what's the problem? The current Standard Model DOES allow neutrinos to have mass, but they then have to change type and protons can decay.

It's still the standard model.

"It’s deeply stupid in more than one way, but I don’t think simply asserting monist materialism adds anything."

Yes it does. Two things at least:

1) An alternative viewpoint.
2) Showing that you need more than blank assertion (unless See Nowt is going to accept that there's no god too, because that's what's believed to be true)