"We are what we are, and we're doing the best we can. It is not for you to set the standards by which we should be judged." -Captain Picard, Star Trek: The Next Generation

Fifty years ago, on September 8, 1966, the first episode of the original Star Trek premiered. It introduced a vision of humanity’s future that included the ability to travel interstellar distances and investigate new, never-before-seen worlds at speeds far exceeding the speed of light. The technological advance that enabled it all? Warp drive, with the power to bend the fabric of space so severely that light years could be traversed in mere days. 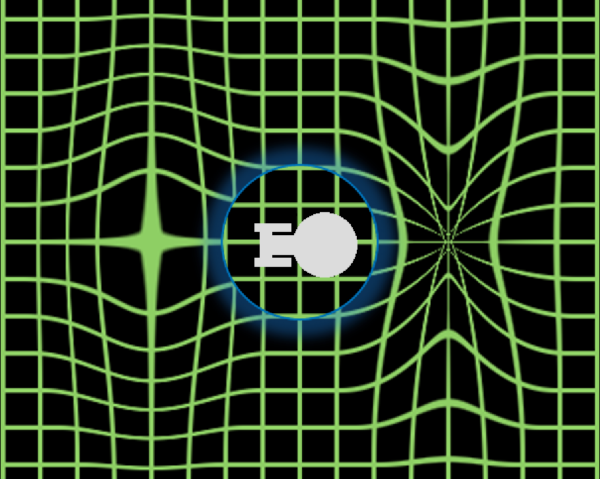 A warp field from Star Trek, which shortens the space in front of it while lengthening the space behind it. Image credit: Trekky0623 of English Wikipedia.

For decades, warp drive was thought to be a mere imagination, but in 1994, a solution that was fully consistent with General Relativity was found, and it followed the procedure and mechanism outlined by Star Trek itself. No, there were no nacelles or warp cores, but if the right kind of exotic matter (or energy) were shown to exist, the physics becomes very straightforward. All that will be needed is the right engineering, and the right way of putting the pieces together. 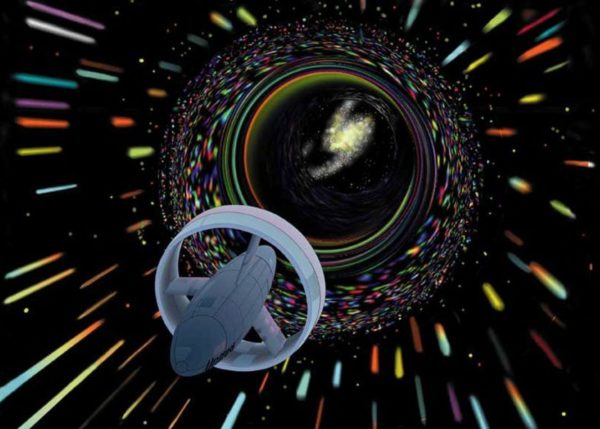 An artist's conception of a starship making use of the Alcubierre drive to travel at apparently faster-than-light speeds. Image credit: NASA.

Come find out how Star Trek’s warp drive might become a reality, and our greatest dreams of interstellar travel might go from science fiction to actual science!

Messages could be delivered of upcoming catastrophes before a light signal could ever arrive, and violating our traditional notions of causality would become a routine game.

So, why hasn't one of humanity's future Alcubierre-drive ships visited us here and now to jumpstart the process and give us the science and engineering info needed to build it? You're telling me there is not one future descendent of a Holocaust survivor at any time in humanity's future after this drive is invented, that gains the means and motivation to go back and kill Hitler? Okay sure, I buy that when we just have a single prototype. I don't buy it if the drives ever go into mass production.

If these drives can play games with causality and time travel, then it is difficult to envision how a future where we build them is consistent with the now where we have no evidence of them. Either (i) human psychology undergoes some radical change prior to their development, (ii) our social organizations become 100% non-corrupt and capable of stopping individuals from cheating prior to their development, or (iii) no such drives get built...ever. And while I'm a sci-fi fan who would love it if we had a fast cheap way to travel across space, realistically, of the three, I think (iii) is most likely.

Wave jumping in space with electro magnetics seems more realistic even if the source is nuclear or if emdrive works.

In the spirit of Eric's post at #1, a variation of the Fermi Paradox pops up. Where are all the aliens. Our planet should resemble the office in Men In Black, given the large number of civilizations that would have created the drive and spread thoughout the universe. And this baby isn't even constrained to the visible universe either, it can go to spacetime far far (and when when) away, and see parts of the universe we can't see by observing from anything in our lightcone.

So, why hasn’t one of humanity’s future Alcubierre-drive ships visited us here and now to jumpstart the process and give us the science and engineering info needed to build it?

I'm not sure if you're being sarcastic or not. A warp drive works by slowing down and speeding up time, not by reversing it. Your argument is, to quote Mr. Spock, illogical.

Space isn't empty. It seems reasonable to assume, that if you compress space all the stuff that is floating around gets denser at maybe faster, too. Might be a hostile environment for a spaceship.

@5: am I interpreting Ethan's "violating our traditional notions of causality would become a routine" wrongly? If it doesn't allow the ship to travel backwards in time, then what do you think Ethan meant by that?

eric @7, I am busy now but I will explain on Sunday.

'Causality' in Physics is the concept that an effect can not occur from a cause which is not in the back (past) light cone of that event. Similarly, a cause can not have an effect outside its front (future) light cone.

Imagine it this way: Say you are floating at a spot in space waiting for a rendezvous. An evil space alien spots you from a distance of 1 light-day away and fires his powerful laser at you. If causality is not violated then you will be dead in 1 day's time because you won't know to move and avoid the beam until it fries you.

However if the friend who was going to rendezvous with you sees the laser beam being fired then flies to you faster than the speed of light to give you the heads-up on the laser beam, you can move your ship a little to the right and the laser blast will miss you.

No one is traveling back in time, but you are reacting to information about an event that your local time-space can't traditionally know is going to happen. That is a violation of Causality.

Wow does that mean we could also explore the currently 'unobservable' part of the universe? If the warping made travel instantaneous, could we travel farther than we can see (the ~14 billion light year limit) and what the radius now is because of the expansion of space (the 45? billion light year thing). Like could we end up a googol light years away, provided the radius of the 'big universe' is at least that. Provided we can aim good :-)

I need an explanation of how particles would be able to move faster than the fields that they exist in.

It is important to realize that this is a universe of fields. A particle would immediately deconstruct at superluminal velocities.

I meant to say:
"An ATOM would immediately deconstruct at superluminal velocities."

Bear in mind that the Alcubierre metric lives in GR land. The W—dia entry is detailed, if not well assembled.

Try the arXiv entries in notes 10 & 30 if you're looking for a tie-in to what you seem to be referring to.* The inside of the bubble experiences no acceleration.

* Up until the atoms thing, the introduction of which I don't understand at all. There's no "atom field," so this doesn't seem to connect back to the original comment.

I was referring, in particular, to the electromagnetic field. Without it atoms and molecules would not be coherent.

Hello,m I am interested in this concept. It was also discussed here at this site http://www.inquisitr.com/2056850/nasa-tests-warp-drive-in-vacuum-breaks…

I wonder if the time-paradox aspects of FTL travel could be resolved by a complete quantum gravity theory. One that would make paradoxical events unobservable by forbidding wave-function collapse in those instances.