Where does our arrow of time come from? (Synopsis)

"Thus is our treaty written; thus is agreement made. Thought is the arrow of time; memory never fades. What was asked is given; the price is paid." -Robert Jordan

Why does time flow forwards and not backwards, in 100% of cases, if the laws of physics are completely time-symmetric? From Newton's laws to Einstein's relativity, from Maxwell's equations to the Schrödinger equation, the laws of physics don't have a preferred direction. Except, that is, for one: the second law of thermodynamics. Any closed system that we look at sees its entropy only increase, never decrease.

A system set up in the initial conditions on the left and let to evolve will become the system on the right spontaneously, gaining entropy in the process. Image credit: Wikimedia Commons users Htkym and Dhollm, under a c.c.-by-2.5 license.

Could this thermodynamic arrow of time be responsible for what we perceive as the forward motion of time? Interestingly enough, there's an experiment we can perform: isolate a system and perform enough external work on it to force the entropy inside to *decrease*, an "unnatural" progression of entropy. What happens to time, then? Does it still run forward? 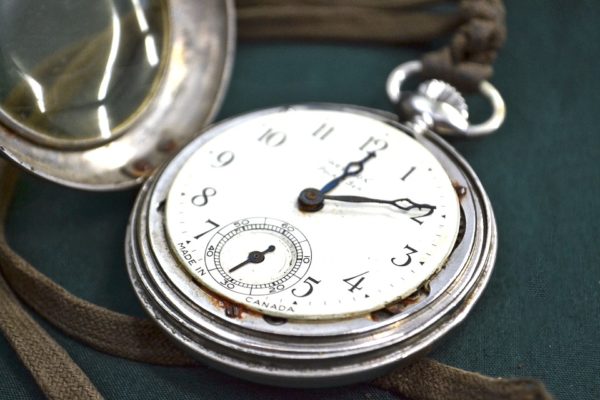 No matter how we change the entropy of the Universe around us, time continues to pass for all observers at the rate of one second per second. Public domain image.

Find out the answer, and learn whether thermodynamics has anything to do with the passage of time or not!

I think there's a typo:

"This idea became known as Maxwell’s demon, and it enables you to decrease the energy of the system after all!"

Seems like it should be "entropy", not "energy". Or maybe I need more schoolin'

Just a random thought, spurred by this article through a bizarre series of jumps:

Black holes trap matter and energy behind an event horizon (macroscopically). Infalling mass and energy don't lose all their potential to do work. For example, quasars are pretty good at doing work!

So black holes aren't perfect entropy-generators (yeah, open system, muddled thinking; just go with it a moment) because the stuff inside still affects the outside. The things that escape a black hole to do work cannot be matter or energy. I'm thinking about the magnetic and gravitational POWER that drives those cosmic engines.

So we have something that isn't matter or energy, and in my two cases we call them "fields"? And the black hole's effect on fields still propagates at the speed of light? That's why gravity waves move at "c" as I understand it.

What is the speed of light inside the event horizon (I thought maybe it was an inward directed vector), that allows the singularity's effects on fields to "escape"?

Oh well, that may be why scientists say all the "information" is smeared on the event horizon. No "inside" to talk about that way, just a volume of space that doesn't exist here anymore.

How can we possibly know that time does not move backwards? Let's assume it does sometimes run backwards, then, by running backwards, time would erase all records of the future and there would be absolutely no way left for us to tell that the time actually ran backwards.

What possible experiment could we do to prove that the always ongoing experience of a unique occurrence of 'now' is not an illusion?

@Carl: Your assumption about how quasars (or any other active black hole) work is flawed.

The emitted power doesn't come from inside the event horizon. It comes from outside, due to conversion of potential to kinetic energy by infalling matter. The plasma in the rotating accretion disk creates a magnetic field; that field gets twisted up along the rotation axes of the black hole (perpendicular to the plane of the accretion disk). The charged particles in the plasma will get accelerated, and will be forced into cyclotron motion around the magnetic field lines. Near the poles, where the field in strongest, that cyclotron motion is sufficient for the charged particles to emit cyclotron and synchrotron radiation. It's that radiation which we see as a "quasar", "active galactic nucleus", etc.

@3 How can we possibly know that time does not move backwards?

I think it was Feynman who said that a positron is indistinguishable from an FTL electron moving backwards in time. So maybe some things are (moving backwards).

How was an FTL electron measured moving backwards in time? It must have moved before the observer saw it.

this is a very confusing notion of describing entropy, and IMO sounds opposite to what it should be. If I have two baseballs, and one is hot and other cold. You are saying that the cold baseball has higher entropy then the hot one?! If you are tying it to thermals, shouldn't it be the opposite? More heat, higher entropy... not more heat, lower entropy.. After all, at absolute 0, entropy is 0.

@6: the statement is not based on measurement, its based on theory/math, which shows that the two descriptions lead to the exact same physically observed phenomena. An FTL electron moving through space in one direction is the same physical phenomena as a positively charged anti-electron moving STL in the opposite direction. For a brief discussion of it, read the section of this wiki page titled "Modern particle physics". Money quote: The backwards in time point of view is nowadays accepted as completely equivalent to other pictures.

@eric #8: There's nothing about FTL, though. The math just states what properties the matter would have if you ran the Feynman diagram backward.

p.s. nice quote from Wheel of Time :) Just noticed it. Nice to see there are others out there who appreciate this huge epic.:)

Physical history is comprised mostly of infinitesimal elements of relative motion (events), not moments. The latter are essentially mental constructs as I argue in my Kindle bk "The Mental Creation of Time." I argue that Newtonian time is a myth, a conflation of our mental time dimension. So there is no flow of physical time, just events constantly occurring that we mentally order into moments. You can read the beginning of the book on Amazon. I have an ad in the Feb. 21 NY Times Book Review (p.27).

anneb,
"What possible experiment could we do to prove that the always ongoing experience of a unique occurrence of ‘now’ is not an illusion?"

That is exactly the problem. There is no such experiment that can disprove your theory, and therefore it is not scientific by the most commonly accepted standard. Or, if you prefer, since your theory and the 'arrow of time' both explain the data equally well, Occam's Razor would favor the 'arrrow of time' explanation.

Ethan, you state categorically, “… if all you did was live in a pocket of the Universe that saw its entropy decrease — time would still run forward for you. The thermodynamic arrow of time does not determine the direction in which we perceive time’s passage.” Is this a true statement? If so, why is it important to discover whether (and if so, why) the early universe passed through a low-entropy epoch? (“…did the Universe go from an incredibly high-entropy state during cosmic inflation to a lower-entropy one during the hot Big Bang, or was the entropy during inflation even lower due to the eventual capacity of the Universe to do mechanical work?” )

Uhm, anyone got an idea why Forbes doesn't just block the spiders from crawling their site?

Since gravitational fields slow down time, maybe both arrow and speed of time determined by gravity (so for example to make time go backwards you would need negative energy/mass).
And maybe gravity shows down time by compressing spacetime (like a making a fluid thicker so all motions inside would slow down).

I see my lamp shining brightly, but I cannot turn it off because I have not turned it on; yet.

I disagree--the psychological arrow of time is determined by the thermodynamic arrow of time. My full critique of this article here:

I disagree–the psychological arrow of time is determined by the thermodynamic arrow of time. My full critique of this article here....

I haven't been around here much this week, and I've only skimmed your critique, but on this item, you're making not just an ontological assertion, but a dualist one. Framed in the terms of physics, this is known in certain circles as "Bad Fazzm."

@Narad #20: Just FYI -- "Jeff Jones" is a theoretical particle physicist (like me, but without the experimental stuff :-) ) who pushed the Big Red Button to escape from academia. I'm pretty sure everything he writes is "framed in the terms of physics."

Thanks for the reference above, Jeff. I still think time would move forward even if the egg did 'uncrack', though. Just a different healing process. You cut yourself, the skin heals (uncuts) and time still moves one way; the cut becomes a memory of the past event, followed by the healing process.

I’m pretty sure everything he writes is “framed in the terms of physics.”

I see. It is too often that people forget the sage advice of Mr. Natural.