Solving The Mystery of Nebulae In Astronomy (Synopsis)

“From our home on the Earth, we look out into the distances ... to imagine the sort of world into which we are born… . But with increasing distance our knowledge fades, and fades rapidly, until at the last dim horizon we search among ghostly errors of observations for landmarks that are scarcely more substantial. The search will continue. The urge is older than history. It is not satisfied and it will not be suppressed.” -Edwin Hubble

Once thought to include anything that wasn’t a star, moon or planet in the night sky, our understanding of nebulae has grown tremendously over the centuries. These objects have gone from simple categorizations of fixed targets to be avoided by potential comet hunters to richly understood, diverse astronomical phenomena. They are distinct from collections of stars like galaxies, open clusters or globular clusters, and instead are varied collections of interstellar gas.

Some of them are neutral, dusty collections that appear as dark nebulae; others reflect the light from existing bright stars. Some are ionized material in star-forming regions that emit their own light at a very particular wavelength, while still others are ejecta from stars of varying masses and ages, including the very old and very young. 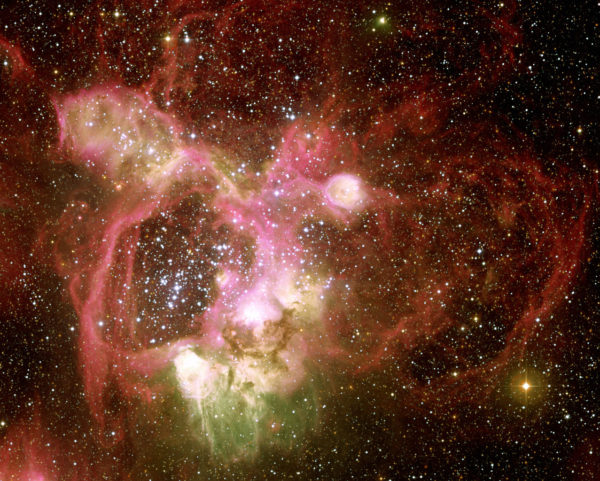 The central region of the emission nebula N44 in the Large Magellanic Cloud. Image credit: ESO.

Here’s a great overview of the different classes and types of nebulae, told in spectacular images and no more than 200 words for Mostly Mute Monday!