"The whole edifice of modern physics is built up on the fundamental hypothesis of the atomic or molecular constitution of matter." -C. V. Raman

As far as humans have figured out, there are four fundamental forces in the Universe: the three of the Standard Model (electromagnetism, the weak and strong nuclear forces) and General Relativity, our theory of gravitation. It’s the great hope of many that a quantum theory of gravitation will someday emerge, and that all four forces could be unified into a single framework. Among others, this is the dream of string theory. 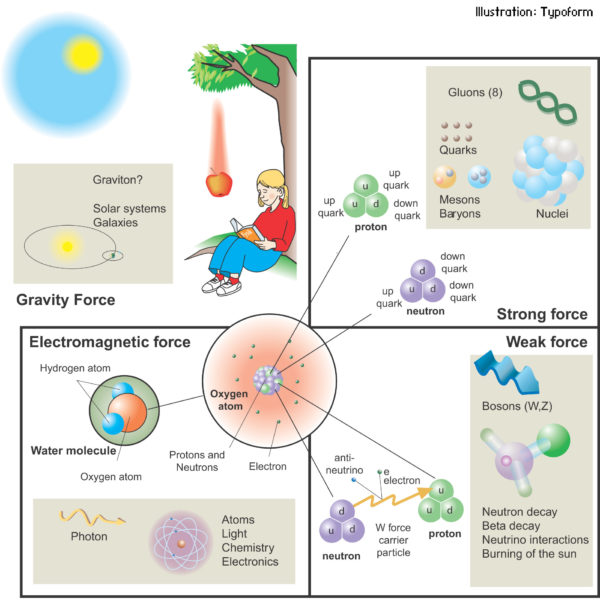 The four forces (or interactions) of Nature, their force carrying particles and the phenomena or particles affected by them. The three interactions that govern the microcosmos are all much stronger than gravity and have been unified through the Standard Model. Image credit: Typoform/Nobel Media, via https://www.nobelprize.org/nobel_prizes/physics/laureates/2004/popular….

But there’s another possibility: that the one force that doesn’t fit isn’t really fundamental at all. It’s possible that there’s some other fundamental entity that gravitation might emerge from. In 2010, Erik Verlinde put forth a very controversial idea that gravity might be emergent from entropy and quantum information, and just this week, he put out a paper that represents the culmination of six years of work on developing the endeavor.

How’s emergent gravity doing? And is it viable, fundamentally flawed, or somewhere in between? Find out on this week’s Ask Ethan!

@Ethan: I'm not anywhere near as qualified as you are to discuss the details of Verlinde's proposal. That said, I think your conclusion is perhaps a bit harsher than it needs to be.

As I read it (as best I could), and as you imply in your article, this is really an initial attempt, a "proof of principle" that the concept is able to derive gravity from entanglement in some internally consistent Universe. What isn't there yet is that the same derivation can be completed in _our_ Universe.

To me, this doesn't seem that much different from the various solutions to GR that posit conditions different from our own Universe -- anti-de Sitter space, even the Schwarzchild solution (which exists in an otherwise empty, flat spacetime).

Getting from Verlinde's model to a realistic theory of gravity, might be impossible, but the fact that it isn't there already shouldn't be a show-stopper.

As I read it (as best I could), and as you imply in your article, this is really an initial attempt....

Thank you very much!

So while this is an interesting idea which gives us a new aproach to gravity, it's all rather arbritary?
It has trouble connecting emerging gravity to "our" universe?

Hey!!! I just watched Empire Strikes Back again and found one your universes where gravity (mass and inertia) was arbitrary and very un-fundamental! Oh wait... it's just made up....but aren't alternate universes as well... so... who cares, it must be real in some other verse if I imagine it so!!!!

Too many people in HEP physics apparently want to be the next Douglas Adams and spew p-hacking absurdity into purely heuristical particles with squiggles magically carrying forces about the place...in a pathetic variant of space time where causality is utterly meaningless.
.
How exactly does one discuss the concept of an 'emergent' property in a utterly non-physical mathematical space where nothing CAN happen or change? The (dark) magic of paradox perhaps Ethan?? Baffle them with bullshit eh? Next time you can dress up as Darth Vader... might be conducive to passing off even more non-sense with a slightly more scientistic look to it.
.
My hats off to Erik.
Must be grand getting paid to smoke pot and crack cocaine while publishing ST:TNG technobabble and claiming to do actual science.

"How exactly does one discuss the concept of an ’emergent’ property"

Gravity as a result of the bending of a spacetime metric is one way to discuss gravity as an emergent property of something more fundamental (spacetime curvature).

I don't believe you think this theory of gravity astonishing, though, do you?

i've written a book on the subject of the One Force of Nature; it's a free download and it uses one of the existing forces and uses it to enforce all the laws of physics. Click on https://www.smashwords.com/books/view/682488 for details

Those what ifs require more than your book pretends to give, and fails.