Ask Ethan: Why Must Time Be A Dimension? (Synopsis)

"It is old age, rather than death, that is to be contrasted with life. Old age is life's parody, whereas death transforms life into a destiny: in a way it preserves it by giving it the absolute dimension. Death does away with time." -Simone de Beauvoir

If you want to describe your location here on Earth, only two values are usually sufficient: one for your latitude and one for your longitude. This is because the surface of the Earth is two dimensional, and you’re generally not either underground or airborne; if you are, a third value, representing your altitude, is also necessary. 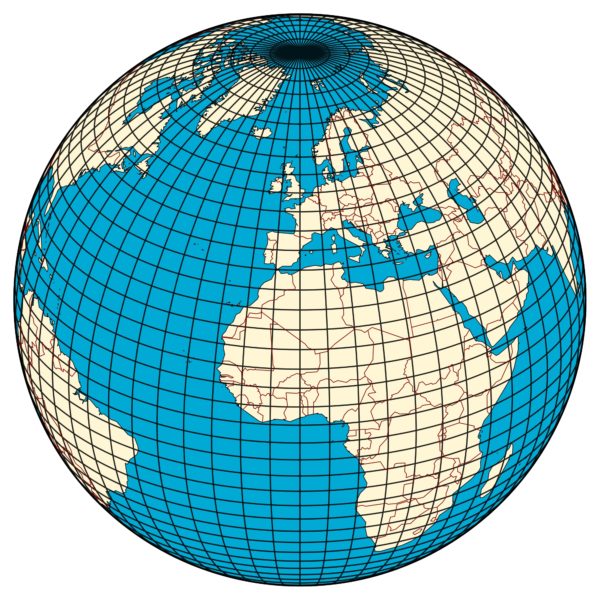 On the surface of a world like the Earth, two coordinates, like latitude and longitude, are sufficient to define a location. Image credit: Wikimedia Commons user Hellerick.

But location typically assumes that we’re talking about a particular moment -- right now -- and that isn’t necessarily the case. Instead, if you want to know exactly where and when an object or event happens to be, you need a fourth value as well: its time. Those four values uniquely define an object in our 3+1-dimensional fabric of spacetime, but there’s a fundamental difference between the three “spatial” ones and the one “time” one. 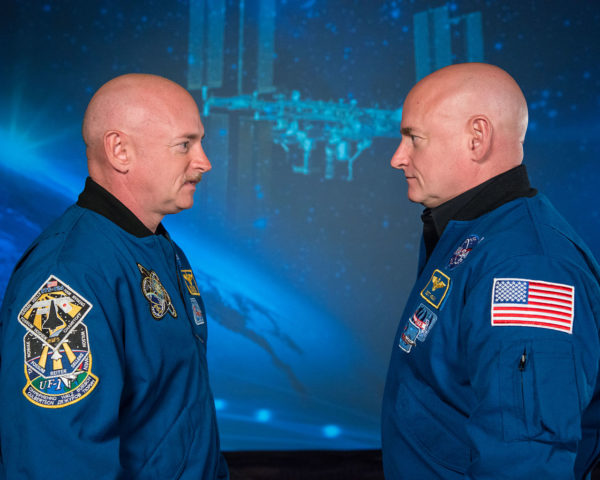 Mark and Scott Kelly at the Johnson Space Center, Houston Texas; one spent a year in space (and aged slightly less) while the other remained on the ground. Image credit: NASA.

Time absolutely must be treated as a dimension, but there’s more to the story than the obvious reasons. Come get the nuance on this week’s Ask Ethan!

Any actual measurement purporting to be a measurement
of 'time' is actually a calculated ratio of two known and relatable distances, a rate of change is derived from this. Minkowski space makes a gross graphical assumption that time is 'spatially' orthogonal to x, y, and z by treating it as just another spatial dimension, this is logically untrue. Space time also can not do anything logically without side stepping the fact that meta-time is required to move your space time point about. You have an inert block universe where nothing changes, this does not resemble our universe in any way, the fact that you are reading this sentence proves it so, even more so if you comment on what was said, as this happened in reaction to what you have read. In science, causality is king. In space time, one slice of space time is static and
incapable of causing any change or reaction to any other slice of space time, you have jettisoned the very possibility
of causality for the sake of your model.
.
On the mathematical side of the argument,
It is also logically impossible for the t coordinate of an object to change without the change being self referential.

Nay, a link to forbes, still.

Actually, nope. In the same way as any measurement of distance is calculated by a ratio of two known relatable events in time.

There's a term you should avail yourself of:

It is the methodology of measurement. Learn a little before making wild claims.

I still think we observe π dimensions.

It hurts you too much.

I observed π dimensions last Thursday, and even though I've moved on in time, it is still with me in two spatial dimensions. Today I went to the gym to speed up and try to slow down the passage of time.

Bending of space-time is well established fact in astronomy. Which I think is the biggest proof that time is a dimension, just like dimensions of space.

Also I think special relativity has another amazing implication: If speed of any object measured 4-dimensionally (instead of measuring in just 3 space dimensions), then speed of the object is constant and equal to c (always). The object can be anything from particles to galaxies!

Relativity also says concept of "now" is relative. Which means past and future must coexists, which implies "Block Universe" and also that time is a dimension. I don't know of any direct observation/experiment clearly showing "now" is relative, but of course relativity itself is well established by countless experiments and observations.

I keep seeing people (including some physicists!) declaring that time does not really exist and it is just a concept created by humans. Then what about the whole Relativity thing and countless experiments/observations supporting it?

this is because on a microscopic level, all Hamiltonians have time-reversal or T-symmetry. Newton's and Schr. eqns also have it. I'm not talking about particle physics (where you have CPT symmetry, but most of the time it's really just T-symmetry), I'm basically talking about chemistry in a certain sense, meaning all processes that make up the world around us. This time isn't the same time we observe - there's a difference between micro and macroscopic time. The individual reactions that make up everything so to say "don't care" whether they're doing it in reverse, but when you get 10^24 of them, and notice well defined loss of information - entropy -, you get our macroscopic time. This can be observed very easily, because a simple consequence of T-symmetry are Onsager's relations, which for instance say that things like conductivity are symmetric tensors, sigma_ij=sigma_ji.

Of course, fundamental physics also doesn't make the distinction between past and present, because you get more symmetry when you don't pick a preferred direction, and that includes time, because that's just a direction in spacetime. There are purely geometric constructions which seem to yield cross sections without reference to any kind of coordinates, time included. But you need to include causality manually!

So there are some reasons to call macroscopic time an emergent phenomenon, but it's just being sensationalist and obscurantist to say time isn't real. There's more nuance to it than we can as humans can experience, though.

I actually think Universe maybe a Cellular Automata operating at Planck Scale and so Quantum and Relativity are emergent properties. But even if so, time still will be time for us. Time Dilation etc effects will still be real. (So maybe our concept of what is a dimension will be modified instead :-)

I actually think Universe maybe a Cellular Automata [sic] operating at Planck Scale and so Quantum and Relativity are emergent properties.

It seems as though the necessarily primitive, deterministic transition rules would have been inferred a long time ago in this case. I recommend this as an introduction to the subject (at least, it's what Jeff Shallit used when I was an undergrad).

^ Formal languages are pretty fun, though, and cut into some deep mathematics. I'm frantically packing for a move, but I seem to recall that token elimination appears somewhere in these posts by "Professor Quibb." If not, you might find them interesting anyway.

Minkowski space makes a gross graphical assumption that time is ‘spatially’ orthogonal to x, y, and z by treating it as just another spatial dimension, this is logically untrue.

No, you don't understand what the span of a vector space is, much less a manifold.

^ P.S. It would totally suck if it were possible to move from Minkowski to 4D Euclidean space and then back again, now wouldn't it, CFT?

"It seems as though the necessarily primitive, deterministic transition rules would have been inferred a long time ago in this case."
What if it is non-deterministic? That just makes me think it must be a more advanced cellular automata than known types.
Especiall considering non-local entanglement feature it must have.

A good example is LBM (Lattice Boltzmann Methods) which is a simple cellular automata used for simulating fluids. It simply simulates collsions of micro particles but in macro scale what you see is Navier-Stokes behavior. For a really advanced CA it may not be easy to discover micro-scale laws.

“It seems as though the necessarily primitive, deterministic transition rules would have been inferred a long time ago in this case.”
What if it is non-deterministic?

In terms of cellular automata, there's not really any difference,* but perhaps the existence of a probabilistic version would be harder to infer.

* Deterministic CAs are Turing-complete. One doesn't get anything extra by adding nondeterminism, which has a specific meaning.

^ I should probably also note that I have no idea what the Planck scale is supposed to have to do with anything here.

If Universe is a CA then its cells must be Planck length size and cells must update each Planck time step. Because known laws of physics imply those are the limit of space and time units.

Ah, the 15-year-old Ostoma stuff, I take it. Good luck with that.

My comments on the ontology of time were deleted. Just like in all "science forums," What is it in the real world?" is not an acceptable topic of discussion. But of course a "real world" independent of observation/ measurement is denied my the philosophy of instrumentalism. So, for instance, the distances between stars depends on the speed and direction of the frame of reference, specificaly the ticking rate of clocks at various speeds.