"Most of these experiments required the reduction of the cosmic ray muon flux in order to be successful, and the group necessarily became expert in the operation of deep underground laboratories." -Frederick Reines

High-energy particles from space, generated from stars, white dwarfs, neutron stars, black holes, active galaxies and more, can far exceed the energies achievable by accelerators like the LHC. Even if you take into account the severe difference in available energy for producing new particles, cosmic rays still have the edge. But because there are so many interactions for them to undergo before they strike the ground, the signal gets incredibly messy. 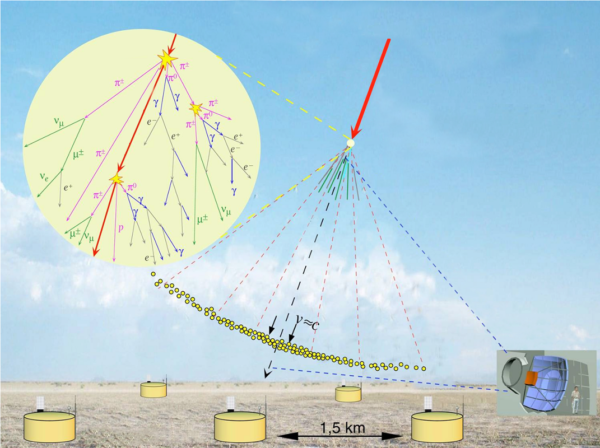 The production of a cosmic ray shower, produced by an incredibly energetic particle from far outside our Solar System. Image credit: Pierre Auger Observatory, via http://apcauger.in2p3.fr/Public/Presentation/.

Preliminary detection results showed a discrepancy between what’s predicted -- that a certain percent of the energy should be in photons vs. muons -- and additional tests were deemed necessary. Now they’ve implemented a new method with the most advanced detector arrays, and the discrepancy is stronger than ever. Could this be the sign of new physics that particle physicists have been hoping for?

If it is, it’s the strongest motivation ever to build a new collider 10 times as energetic as the LHC, as it will finally take us beyond the Standard Model, experimentally!

There's a non-mainstream theory that states that quarks don't for various obvious reasons but the main one is that they need the matter-antimatter asymmetry.

It states that the transition of energy to matter was via electrons and positrons and that the latter is a positively charged matter particles as antimatter doesn't exist; it's only a matter of definition that's causing problems unnecessarily.

So, the particles in any shower will eventually lead to electrons, positrons, and photons. Muons are simply large electrons / positrons.

Notice, when 2 protons are smashed together in a collider, the final products are electrons, positrons, and photons which prove that this is what the protons were made of.

Besides, we had 2 baryons before the protons were smashed; now we have a shower of leptons. Isn't that a violation of the law of baryon number conservation?

"Notice, when 2 protons are smashed together in a collider, the final products are electrons, positrons, and photons which prove that this is what the protons were made of."

Notice pair production, where actual matter is produced without any actual matter being required to be split apart to create them.

Unless you're going to claim electrons and positrons are constituent parts of photons...

@kasim #1: You're treading directly into my area of expertise (particle physics), and getting it dreadfully wrong.

Proton-proton collisions produce primarily pi mesons (both charged and neutral), plus baryons and antibaryons, and photons. Lepton production is extremely rare, and is in fact is used as a unique signal that something unusual happened in that collision.

Once the particles produced start to hit the detector components (in particular the calorimeter) they certainly do convert into mostly photons and electrons, but that is due to the very low energy ionization and energy-loss processes involved.

In a single collision, it is unlikely that you can add up all of the DETECTED particles and observe baryon conservation. That's because the detector apparatus has holes in it! In particular, two very large holes through which the beamline and magnet elements have to penetrate. In a proton-proton collision, the most likely outcome is that baryonic products travel roughly parallel to the initial beams, and are therefore lost through those big holes. That doesn't mean baryon number wasn't conserved, it means we can't built a magical hermetic detector to see everything.