“You may hate gravity, but gravity doesn’t care.” –Clayton Christensen

If all we had were galactic rotation curves -- like those measured by Vera Rubin -- we would know that something was wrong with our picture of the Universe, but we wouldn’t know how. Two equally good explanations, that there was either a flaw in the law of gravity or there was the existence of some unseen mass, could account for what we saw. But observations of galaxy clusters point to dark matter in a dramatic fashion. 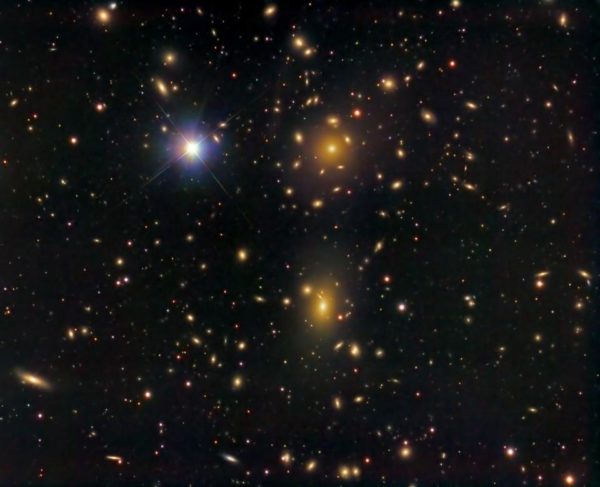 The Coma cluster of galaxies, whose galaxies move far too quickly to be accounted for by gravitation given the mass observed alone. Image credit: KuriousG of Wikimedia Commons, under a c.c.a.-s.a.-4.0 license.

Both dark matter and the modifications one can make to gravity to explain galactic rotation make specific predictions for other phenomena. The motions of individual galaxies within a cluster, the bending of background light by strong lensing, the distortion of galaxy shape from weak lensing and the separation of effective mass from normal matter are four independent ways clusters can discriminate. On all four counts, they point to dark matter, not modified gravity. 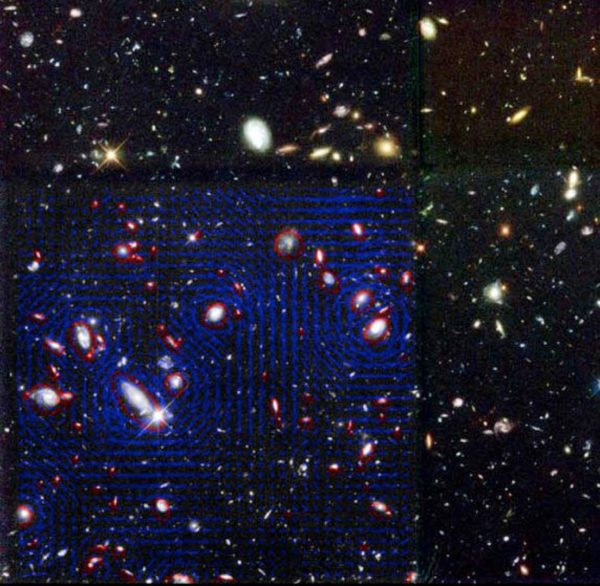 The overlay in the lower left hand corner represents the distortion of background images due to gravitational lensing expected from the dark matter "haloes" of the foreground galaxies, indicated by red ellipses. The blue polarization "sticks" indicate the distortion. Image credit: Mike Hudson, of shear and weak lensing in the Hubble Deep field. His research page is at http://mhvm.uwaterloo.ca/.

Come get the full story in pictures, video and no more than 200 words on today’s Mostly Mute Monday!

Sabine has a reply of sorts:
backreaction.blogspot.co.il/2017/01/the-bullet-cluster-as-evidence-against.html?m=1