"What we observe is not nature itself, but nature exposed to our method of questioning." -Werner Heisenberg

Empty space, according to quantum mechanics, isn’t exactly empty. Take away all the matter, radiation and anything else you can have populating your space, and you’ll still have some amount of energy in there: the zero-point energy of the Universe. One consequence of quantum electrodynamics is that this sea of virtual particles is always present, and a strong magnetic field can lead to some really bizarre behavior. 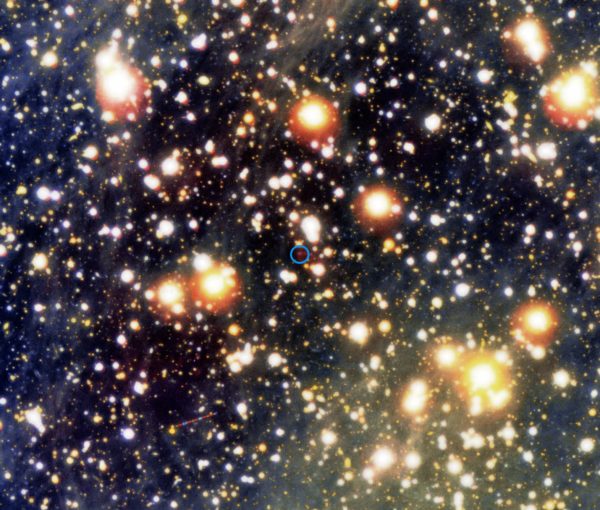 VLT image of the area around the very faint neutron star RX J1856.5-3754. The blue circle, added by E. Siegel, shows the location of the neutron star. Image credit: ESO.

Known as vacuum birefringence, it was theorized by Werner Heisenberg and Hans Euler more than 80 years ago, as these electron/positron pairs get yanked along the magnetic field lines. In theory, this should polarize the light from photons passing through fields that are strong enough, but we’ve never been able to observe it. Until now. Thanks to the VLT and light from a neutron star, the prediction is confirmed for the very first time.

Come learn the incredible science 80 years in the making, and how we’re poised to learn even more about this fascinating property of light and empty space moving forward!

Empty space IS "empty". This article does NOT introduce anything new, BUT only redefines the same physics problem by changing the explanation. The result is: No solution, as yet, has been found. The mistake in THIS article in the statement "By Quantum physics, -......"empty space isn't empty"", is unscientific. When you answer a question in a University examination, you CANNOT give excuses for NOT BEING ABLE 2 ANSWER: In this case: "By Quantum physics",-...... Physics IS Physics. THEREFORE: WHAT IS THE ANSWER 2 THIS QUESTION: "IS "EMPTY SPACE" EMPTY? " The answer is: YES. IT IS. We refer 2 the explanation above and continue to the FULL explanation: When you take away matter, radiation. some energy is still left. We correct: When you take away matter, radiation ------AND other forms of energy (ACCORDING TO THE LAW : ENERGY CANNOT BE CREATED NOR DESTROYED BUT IS TRANSFORMED FROM ONE FORM TO ANOTHER)------THERE WILL BE NOTHING IN EMPTY SPACE. This is called "ABSOLUTE ZERO TEMPERATURE", ALSO:" -273.16 degrees Celsius." End

No to both, Denier.

For a start, whenever two photons cross, each finds itself in the magnetic field of the other photon. This does not seem to bother them. You require a mass with charge to slow photons down, since the inertia of the mass is the cause of the delay of the photon's propagation.

Secondly, since they do not use this "medium" to travel, the field isn't a medium.

Third, even it it did, that wouldn't make it a medium.

Any such field does not supply an absolute frame of reference.

Isn't what you're asking really a Faraday effect?

It's a fascinating observation in terms of astronomy and neutron stars, I agree. But what I don't understand is how is different from what is already observed i.e in pulsars or even our sun. This is in turn related to what I wrote in previous comment about Faraday effect. The cause are free electrons... so in terms of detection, how can you tell a difference between which electrons caused it?

The second question is in general about vacuum polarization. Wiki says: The effects of vacuum polarization were first observed experimentally prior to 1947 before they were theoretically calculated....The effects of vacuum polarization have been routinely observed experimentally since then as very well understood background effects. Vacuum polarization referred to below as the one loop contribution occurs with leptons (electron-positron pairs) or quarks, the former (leptons) first observed in 1940s but also recently observed in 1997 using the TRISTAN particle accelerator in Japan,[1] the latter (quarks) along with multiple quark-gluon loop contributions from the early 1970s to mid-1990s using the VEPP-2M particle accelerator at the Budker Institute of Nuclear Physics in Siberia in Russia and many other accelerator laboratories worldwide..."

From this, it sounds that vacuum polarization has been here in practice as well as theory for a long time. First time in neutorn star perhaps, but hardly first observation of effect ever IMO.