Firing a gun into the air can kill someone (Synopsis)

"I've heard it said that God made all men, but Samuel Colt made all men equal. We'd see what Mr. Colt could do for a woman." ― Cherie Priest

Bullets are incredibly dangerous when fired from a gun, but that's true even when they're fired up in the air, not at a target directly. Falling, stray bullets can still reach very large speeds, large enough to break the skin and cause internal damage, potentially even killing someone. 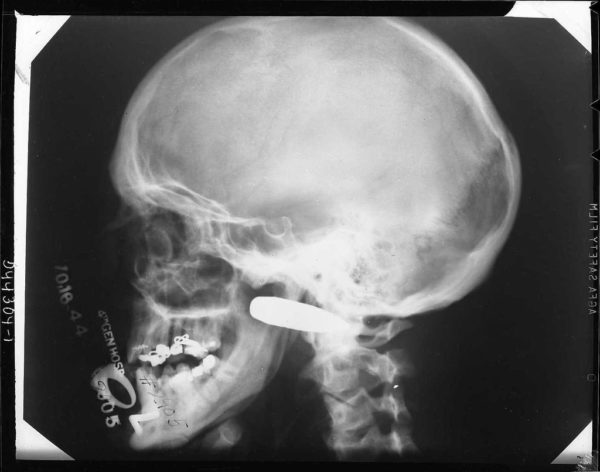 A 0.50 caliber bullet wound of the face. The patient was injured while heating a 0.50 caliber incendiary machine gun bullet with a blowtorch in a World War II-era accident. Image credit: the National Museum of Health and Medicine.

There are huge variations in what can happen depending on the weight and size of the bullet, the angle it was fired at, your altitude, the thickness and elasticity of the skin it strikes and where it impacts you. The most dangerous times are New Years and 4th of July in urban areas, and there are numerous documented cases of injury and death resulting. 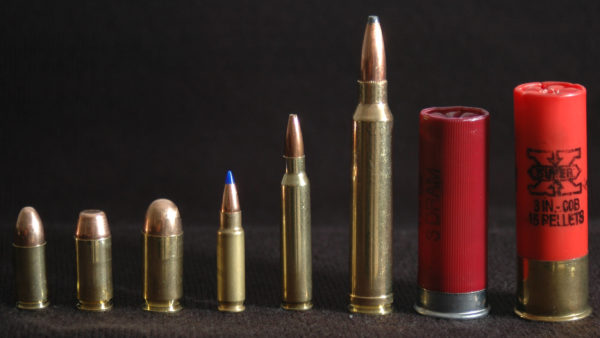 Various weights, sizes and calibers of bullets. Even at the same muzzle velocity, when fired up, these bullets will all come down at different speeds. Image credit: Bobbfwed at the English language Wikipedia.

Don't be an innocent bystander, and don't be part of the problem. There are steps we can all take to be safe, so spread the word!

Another suggestion is to buy a bunch of blanks so that no actual bullet flight occurs. Look dude, if blanks are good enough for the 21-gun military salute of a dead President, then they're more than good enough for your backyard barbeque.

You still need to be careful. An actor pretending to be ex-Seal or something on the set of a series shot himself dead playing russian roulette with a gun loaded with blanks.

My friends cousin was kill on News Years Eve in New Orleans by a bullet someone fired into the air. She and friends were eating at an outside cafe. when she suddenly collasped. . That's when they saw the bullet hole in the top of her head. Twenty one years old

No argument, but: the people who think it's funny to clown around with guns and "pretend" to play Russian Roulette aren't the type to pay attention to common sense rules like that.

Everyone is a careful gun owner until they aren't.

Just repeat. For those who aren't listening, you keep the entire thing up, bathe them in the idea of safe gun culture. It's not that different from the religious indoctrination. When every single hour has the same message around you, you normalise that message and even if you're not consciously accepting it, it becomes the framework where you look at life through.

It can be used for weal as well as woe.

Bathe the US citizen in the ideas like blanks still kill. That you never know if the gun is loaded until you look, and even then you pretend it is loaded since last you looked. If you're not sure, think it's just your child about to appear, so don't assume it's a target.

It'll take years, but you won't have to make those idiots listen and accept it, it will just seep in and become the framework of gun handling.

Yes indeed! The ADAs' presented a couple of cases while I was serving on the Grand Jury.

The problem is that risk is equal to damage times probability.

So you're addressing the damage question but dean is dealing with the probability, which is far higher because people "think" blanks are safer, so don't treat the gun as carefully.

That the bigger risk in the USA is the danger of live rounds rather than the risk of unsafe gun usage (as, for example, in Finand, where there's a higher per-head count of guns, but far fewer gun deaths, because nobody there thinks that there's a "god given right" (if there IS, then nothing that can be done by mere government can stop it: god just makes a miracle and guns will appear on demand) to arms and tread them like the weapons of war they are, not as the aid to playing cops and robbers as adults).

Shouldn't this be on Ends With a Bang?

@Wow, you are probably thinking of Jon-Erik Hexum, who was goofing around during the series Cover Up. His prop gun only had one blank, but after he spun the barrel there it was.

But even experienced people make mistakes. In my wife's home town, a gun dealer was demonstrating an electric mini-Gatling in front of a crowd. It jammed. They unplugged it. A firearms instructor looked down the barrel while the dealer tried to manually rotate the magazine.

A firearm.. any firearm is meant for one thing, and one thing alone.. to kill. Hence the saying within military and police... you should draw a gun ONLY if you are intent on using it.

Thus IMO using firearms for anything else is reckless and dangerous. Shooting live ammo in the air as a part of celebration is just dumb. IMO there shouldn't be any guns or carrying guns other than in a hunt, on a designated shooting range or by law enforcement, security and military in the field.

That's pretty much what finland does. The few gun owners keep them locked away all the time and have the ammo locked up separately. The millitia keep their guns at the base.

Any gun owner who goes to a range should keep their gun there.

as for the blanks... Blanks will kill if shot within 30 cm of your head, or heart or major blood vessels. A blank can kill even at several meters due to clumps of gun powder not burning up and being ejected as shrapnel. So no.. no blanks, no rubber bullets, not anything.. just stay away from guns.. you don't need them, they are not cool. If you admire the craftsmanship or history... great.. i understand.. seal the barrels and all is good.

I mean. .if it's down to the bang or bum... firecrackers nowdays are louder then some small artillery ffs :D

Buy couple of fireworks with a long fuse.. stand away.. and that's that. Guns are not for making loud sounds.

I mean. .if it’s down to the bang or bum… firecrackers nowdays are louder then some small artillery ff

Firecrackers are banned in many places in the US. They're dangerous don't you know.

And no wealthy NRA to protect them.

Plus, you know, terrorists....

Not sure I follow... you can't go to a pyrotechnics store and buy a firecracker because they are banned... and yet you can go to a general supply store and buy a gun and ammo?? Or is it that the same parts that ban firecrackers ban guns as well (that would at least make sense)..

Not sure I follow… you can’t go to a pyrotechnics store and buy a firecracker because they are banned… and yet you can go to a general supply store and buy a gun and ammo??

Yes exactly! Virginia is a good example; IIRC state law forbids the purchase or sale of any 'rocket' type firecracker that launches (so, sparklers and fountains are okay). But you can relatively easily buy a gun in the state at their fairly unregulated gun shows.

I should say in fairness that the state allows the sale and purchase of model rockets that use those little solid fuel boosters. So the fireworks ban is probably based on pragmatic use concerns (i.e., that people often behave drunk and stupid on the 4th of July, so let's curb the use of rockets associated with that date), and does not reflect the state making some irrational judgment that bottle rockets are more dangerous than a .357 magnum.

I recall a story about someone who, as a prank, put a firework up someone's butt and lit it.

Might have been apocryphal, but its not the sort of story you can easily get a safe google search term from. And it's not like worse hasn't been done with "pranks" while drunk.

But as a criminal, if I want an clean gun not connected to me for a crime, I'll know exactly where to go to get one. Some gun nut's bedroom.

as far as rocket fuel... well.. :) ground sugar powder and some KNO3 still works like a charm..

But as a criminal, if I want an clean gun not connected to me for a crime, I’ll know exactly where to go to get one. Some gun nut’s bedroom.

Your idea is to break into the home of a known gun enthusiast? Darwin in action.

uh, dumbass, how many gun nuts have a loaded gun right next to their bed??? Doing so is a daily entry to the darwin awards.

Though there may not be much difference between the two states where you're concerned, denier.