Can Muons - Which Live For Just Microseconds - Save Experimental Particle Physics? (Synopsis)

"It does not matter how slowly you go as long as you do not stop." -Confucius

The large hadron collider is the world’s most powerful particle accelerator, colliding two protons at energies of 6.5 TeV apiece. But you’ll never have the full 13 TeV of energy available for that collision, thanks to the fact that the proton itself is a composite particle, and that energy is distributed throughout its components. When you get a collision, only a fraction of that energy goes into the collision itself, while the rest remains in the other component particles. 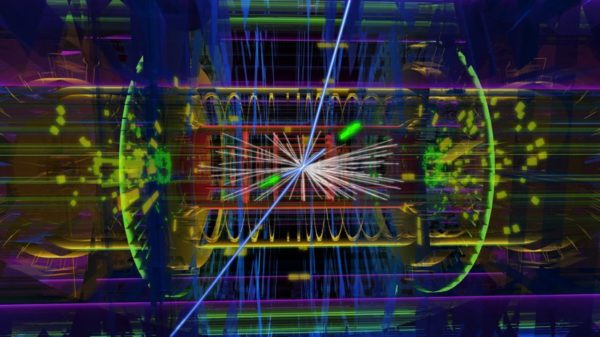 A candidate Higgs event in the ATLAS detector. Note how even with the clear signatures and transverse tracks, there is a shower of other particles; this is due to the fact that protons are composite particles. Image credit: ATLAS Collaboration / CERN.

The way around this is to use fundamental particles. The electron is no good, because it loses too much energy when you accelerate it in a magnetic field; it’s charge-to-mass ratio is too high. But the electron has a high-mass cousin, the muon, that’s 206 times as massive. Even though the muon only lives for microseconds, the right accelerator might be able to take advantage of special relativity (and time dilation), bringing a muon/antimuon collider to life, and realizing the best of both worlds. 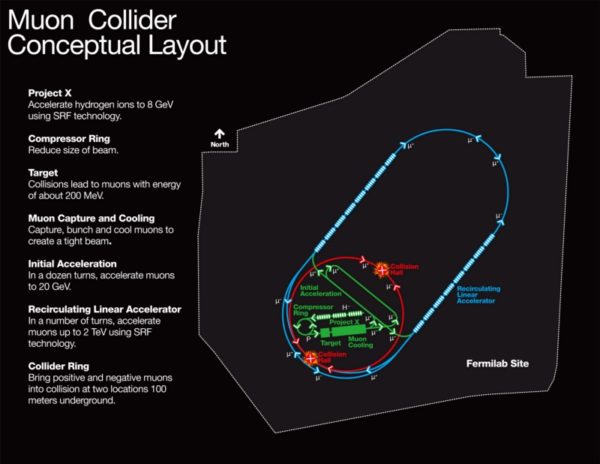 A design plan for a full-scale muon-antimuon collider at Fermilab, the source of the world's second-most powerful particle accelerator. Image credit: Fermilab.

What are the prospects for a muon collider? They’re better than they’ve ever been, and just might save experimental particle physics!

We have a 1 axis force that is super long range but wimpy in gravity. Then we have a more powerful but shorter range 2 axis force in electromagnetism. Lastly we have a 3 axis color force that is so powerful it can literally pull matter into existence from nothing but is super short range. There is a weak force but it is really just an offshoot of the 3 axis color force. There is no 4 axis force.

Is everything limited to 3 simply because we live in a 3+1 dimension universe that doesn't have the informational capacity to represent anything further? Is that where the limits to the Standard Model stem from?

I don't think that would work. Mesons are really short lived particles. The only reason they make to the ground from where they are generated in the atmosphere is because of relativistic time dilation. Even if you had a collector placed perfectly to capture and reroute a naturally created one, you've also got to have a second collector perfectly placed to capture another one at the exact same time so they can be collided. You can't put them in a ring around the Earth because they'll decay before making the loop.

one big problem with that idea are the properties of the beam-line itself. Beam line tunnel is under high vacuum, so can't really be open on one end to the sky. The other issue is, you're at a mercy of those atmospheric muons being created at just the right spot to perfectly enter the opening in your detector (if it could be somehow be built). Much more practical to go with creating muons yourself.

one big problem with that idea are the properties of the beam-line itself. Beam line tunnel is under high vacuum, so can’t really be open on one end to the sky.

I thought of that, but it doesn't have to be 'open.' There just needs to be a portion of beamline where there's no magnetic field orthogonal to their path; the muons will fly right through the steel etc. At least, some of them will. The problem is probably capturing them *in* a magnetic field, then redirecting them and accelerating them all within a few microseconds. I'm also not sure that the fluence would be worth the engineering; you might get a lot more in a beamline just by whacking things together.

Still, it would be interesting to do a proof-of-principle by setting up a detector at the end of a very short, curved beam section, just to see if the capture-and-redirect concept is feasible.

one thing I can't get around is size. Even a "tiny" accelerator is let's say couple of km in diameter. Building something like that in vertical is just a nightmare (and not really possible currently). Not to mention it would be the largest victory arch on the planet :D

One thing I'm thinking about is the problem with that balance between their velocity and lifetime.. I mean.. let's say you create muons in some HEP fashion in some section/chamber, and they are now flying all over the place. You somehow have to "catch" them, group them, align them to form a beam. In order to that.. I imagine you somehow need to slow them to get them to all the different sections that do that... but then they live less. It's true that when they move at near c, they're half life is longer, but keeping them at that energy while trying to form a beam is IMO a gargantuan task. Ethan didn't really talk at all about the tech, but somehow what's in place for electron beam creation, doesn't really seem suitable for muons IMO. Once you get them in the actual beam of high enough "brightness" and all the magnets are pumping, and your muon is alive and you can start accelerating it even more.. yeah.. that's cool. But how do you get the muon to that point in the first place without it dying from chaotic source -> coherent beam?

With each successive collider, the price of building the next one increases. Long before you run out of ideas of new machines you could design, you are going to run out of other people's patience and money to build them with.
.
The LHC was funded by gross exaggeration and outright lies about the Higgs and BSM. So far the most useful information gleaned from this project has not been about what was discovered, but what has not been detected at all, mainly, the oversold new physics which captured the public's imagination to fund the thing, and has since largely dissipated. Something very similar happened after the Apollo project, the public which funded it quickly lost interest in one time bragging rights and moved on to other concerns.
.
Pitching the 'next best thing' in HEP accelerators 'just because we're curious' is going to be a much harder sell this time around.

The LHC was funded by gross exaggeration and outright lies about the Higgs and BSM.

Building something like that in vertical is just a nightmare

Again, though, they're charged so bending their path is comparatively easy. You only need a short section pointed at the sky/source and then you can use magnets to bring them from vertical to horizontal.

You only need a short section pointed at the sky...

Actually I take that back; you don't even need that. There are bound to be some cosmic rays coming in at an oblique angle, so even a standard particle accelerator should, in theory, have som muons traveling through the Earth into it at 'just the right angle.' The fluence won't be very high, though.