When will the first star go dark? (Synopsis)

"End? No, the journey doesn't end here. Death is just another path, one that we all must take. The grey rain-curtain of this world rolls back, and all turns to silver glass, and then you see it." -J.R.R. Tolkien

Stars live for a variety of ages, from just a million or two years for some to tens of trillions of years for others. But even after a star has run out of its fuel and died, its stellar corpse continues to shine on. Neutron stars and white dwarfs are both extremely massive, but very small in volume compared to a star. As a result, they cool very slowly, so slow that a single one has not yet gone dark in all the Universe.

So how long will it take, and who will get there first: neutron stars or white dwarfs? Believe it or not, there’s still enough uncertainty about how neutron stars cool, mostly due to uncertainties in neutrino physics, that we think we know the answer to be white dwarfs -- and 10^14 or 10^15 years -- but we’re not entirely sure! 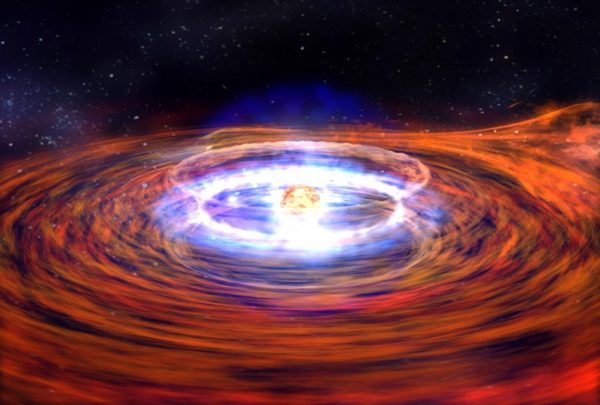 Forming from the remnant of a massive star that's gone supernova, a neutron star is the collapsed core that remains behind. Image credit: NASA.

Come find out what we know about finding the first truly dark star in the Universe today.

Stars going dark in “only” around 1,000 times or “only” a million times the age of the Universe! Astronomical numbers again!

Cool! I'd never even thought about how long it would actually take for stars to become the "dead cinders" described in the books I read as a kid.