"We find them smaller and fainter, in constantly increasing numbers, and we know that we are reaching into space, farther and farther, until, with the faintest nebulae that can be detected with the greatest telescopes, we arrive at the frontier of the known universe." -Edwin Hubble

When you look out at the distant Universe, you can see all sorts of things: stars, galaxies, clusters of galaxies, going as far back into the distant past as our telescopes can image. But where you have the greatest concentrations of mass, an extreme phenomenon emerges: that of gravitational lensing. Any foreground objects lying behind that mass will have their light stretched, magnified and distorted by the intervening matter. 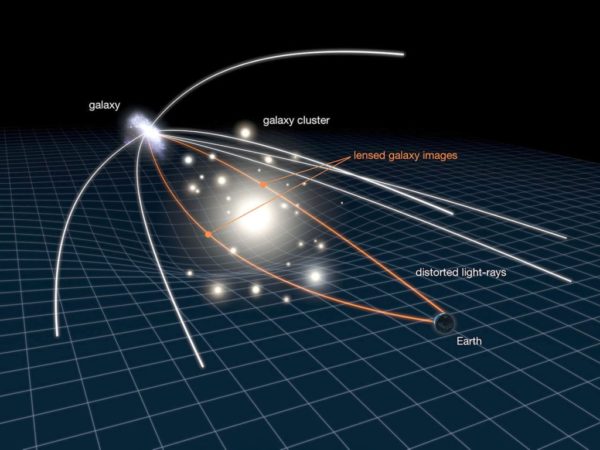 An illustration of gravitational lensing showcases how background galaxies — or any light path — is distorted by the presence of an intervening mass, such as a foreground galaxy cluster. Image credit: NASA / ESA.

Recently, as part of the Hubble Frontier Fields program, the telescope followed-up on galaxy cluster Abell 370, and revealed the most spectacular gravitational lensing signal ever seen in a galaxy cluster. Most importantly, it provides some very strong evidence not only for dark matter’s existence, but for its presence distinct from any galaxies at all. 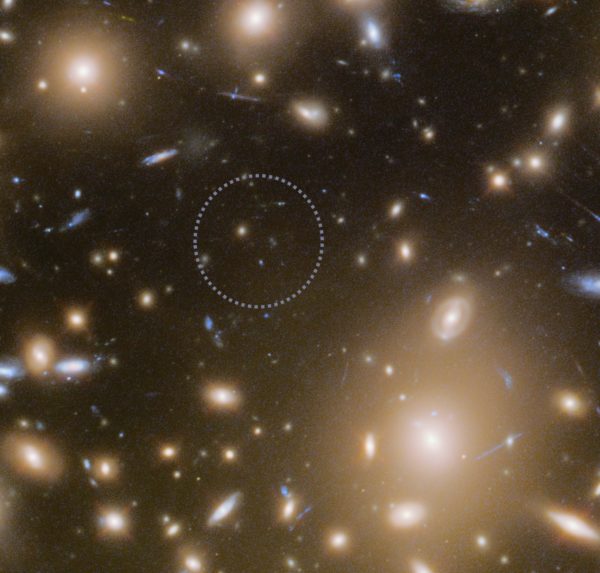 Despite the presence of large, elliptical galaxies, the location where the mass density is greatest, indicated by the dotted circle, corresponds to no known massive galaxy or other structure based in normal matter. The only explanation for this is the presence of an invisible source of mass: dark matter. Image credit: NASA, ESA/Hubble, HST Frontier Fields / E. Siegel (annotation).

Come get the full story in images, videos, and no more than 200 words on this edition of Mostly Mute Monday!

Re: So what do you think is going to happen to it, and if they were to find evidence how big of a find/research would it be compared to others?

Something is clearly curving space. Since we only know matter to be able to do this and we are not seeing any matter, we assume it must be 'dark' matter. The best proof that such matter exists is in the colliding Bullet Cluster where gravitational lensing occurs on both sides of the collision and in the center colliding gas is heated up by the collision. However, besides the gravitational effects we have not yet discovered any dark matter particles or any testable theory that predicts the existence of any undiscovered matter types. Dark matter was invented to explain these lensing effects, but invented matter is not the same as discovered matter. Some theorists claim dark matter doesn't exist at all and these lensing effects are caused by something else. Still some work to do!

@anneb,
"Something is clearly curving space."
No.
That is an assumption.
What do you actually know?
Something is clearly curving light....start there instead.
What could possibly curve light?
.
Have you ever seen the shimmer on the hood of a car that has been in direct sunlight? When you see the mirage like optical distortion, do you assume the car is bending space to cause that to happen? Or could it be the heated air light is travelling through causing the effect? If a mere hot car hood can cause such distortion, how much distortion do you think the corona of a star can produce? Remember, our own sun does have an atmosphere that extends well beyond the star itself as well...I'm going to go out on a limb and guess its also a tad heated as well.
When you see the sun turn red in the evening, do you think our sun has somehow become red, or do you suspect the amount of air and dust the sunlight is travelling through might have something to do with it? Volcanic eruptions do wonders for colorful sunsets as well.
Fact is, light travelling through a heated gas and/or dust easily bends and is diffracted.
Ethan might even be willing to admit one of the problems with good star gazing is warm air, it makes the stars twinkle (waver) which produces cute nursery rhymes, but blurry images and artifacts that aren't really there. Anyone remember the stories about all the fuss made over the Martian canali? A huge amount of very imaginative speculation over very little evidence, that turned out to be completely wrong, just optical artifacts of bad viewing.
.
Perhaps the next question should be asked, "what kind of funhouse diffraction of light occurs when light is traveling through or near the edges of large super heated balls of plasma and gas (stars), or dense groups of them (galaxies), or through nebulae?"

@CFT,
So gravitational lenses in space are not because of bending of spacetime but just because of refraction of light passing thru gas and none of the physicists in the world could think of that but you? Or you claim they know it but hide it from the public?

@CFT,
From Wikipedia "Gravitational lens":
"Classical physics also predicts the bending of light, but only half that predicted by general relativity."
But you claim classical physics makes the same prediction as GR, isn't it? Otherwise how your explanation could match to observational measurements, correct?

@Frank,
yet even more bad math magically carrying forces, because (take your pick) entropy..., lots of sloppy definitions, oodles of stacked assumptions, lots of imagination, etc )...claiming with certainty it curves space without even a measureable, locatable mass to put in the space time. Ok. sure.
.
I also find it strange that Ethan puts up such delightful charts showing light 'following the curvature of warped space' caused by a mere star (curved gridded rubber sheets again...), but when LIGO is discussed, light mysteriously moves independently of the spatial curvature of black holes "because... ". Light sure is picky about when it will and won't conform to the assumed curvature of space containing it.

Hi Ethan. Quick question (sorry for cross-posting). The Standard Model doesn’t seem to prohibit a Universe of age 1 Trillion years (72 of ours stacked together). At a quintillion maybe proton decay might have an effect … but so what. Is the 13.8 GY age of the Universe simply stochastic?

@CFT,
I think what you mean is if gravitational waves warps space-time and everything in it how LIGO could detect them?
I had asked about that in this website before and I think the answer was changes in time cancel out because they effect the both ends of the detector same but changes in space (distance) still detectable. I think Ethan could answer it better maybe sometime.