Ask Ethan: Can the Universe ever expand faster than the speed of light? (Synopsis)

"In expanding the field of knowledge we but increase the horizon of ignorance." -Henry Miller

You know it as the most fundamental law of relativity: that nothing can travel faster than the speed of light. And yet, the observable Universe itself, which has been around for 13.8 billion years since the Big Bang, is now 46.1 billion light years in radius. If everything were contracted down to a tiny volume of space, it seems that such a size would be impossible to achieve. Unless, somehow, space itself were expanding faster than the speed of light. 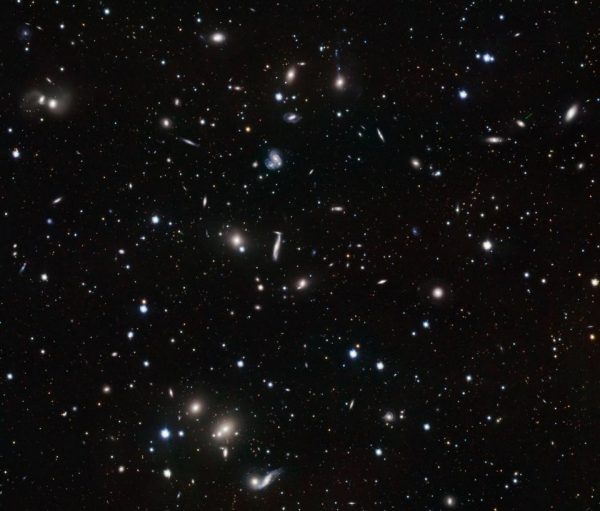 The Hercules galaxy cluster showcases a great concentration of galaxies many hundreds of millions of light years away. The farther away we look, the less reliable the assumption that we can treat an observed object as being in the same location in space and time that we are. Image credit: ESO/INAF-VST/OmegaCAM. Acknowledgement: OmegaCen/Astro-WISE/Kapteyn Institute.

As it turns out, though, not only is it still true that nothing can travel faster than light, but space itself doesn’t even expand at a speed at all! The reason for the confusion is that space expands at a speed-per-unit-distance, which allows the Universe to expand, light to redshift, and galaxies to appear to recede, all without exceeding the cosmic speed limit at all.

The farther a galaxy is, the faster it expands away from us, and the more its light gets redshifted, necessitating that we look at longer and longer wavelengths. Beyond a certain distance, galaxies become unreachable by anything we emit today, even at the speed of light. Image credit: Larry McNish, RASC Calgary.

Want to finally wrap your head around the size and expansion of the Universe? Make sure you don’t miss your chance on this week’s Ask Ethan!

You posed a good question, but haven't really answered it.

I think you need to show, as you have in other articles, that the effect is a purely geometric consequence of the expansion. Btw, where do you post responses?

“As it turns out, an object that was merely 168 meters away at the Big Bang (okay, at 10-33 seconds after the Big Bang) would only have its light reach us today, 13.8 billion years later, after an incredible journey, and an incredible amount of stretching, and would presently be 46.1 billion light years away.”

"the most fundamental law of relativity: that nothing can travel faster than the speed of light"

This cannot be a "law". At best it is a consequence of Einstein's constant-speed-of-light postulate. However the postulate is obviously false. Consider the following setup:

A light source emits a series of pulses equally distanced from one another. A stationary observer (receiver) measures the frequency:

The observer starts moving with constant speed towards the light source and measures the frequency again:

"Premise 2 (obviously true): The formula
(measured frequency) = (speed of the pulses relative to the observer)/(distance between the pulses) "

Your addition of "relative to the observer" to that part of the formula renders the premise false by default. You have changed the formula into something that is is not and never was. Misstating a formula in order to get the conclusion you need to get is not reasoning.

"Your addition of “relative to the observer” to that part of the formula renders the premise false by default. You have changed the formula into something that is is not and never was."

Your objection is strange, to say the least. If I have changed the correct formula, why don't you show it?

My comment did exactly that. The rest is up to you. Or not. As you see fit.

The formula I give is

You say that "relative to the observer" is wrong but it is not - it is equivalent to "measured by that observer". So we have two formulas and both are correct:

Any correct interpretation of the Doppler effect implies that the speed of light varies with the speed of the observer. This variation is often camouflaged but sometimes it is not and Einstein's relativity is unconsciously repudiated:

which has the receiver moving towards the source at one third the speed of the pulses themselves, four pulses are received in the time it takes the source to emit three pulses." http://www.einstein-online.info/spotlights/doppler

which is fatal for Einstein's relativity of course.