Are Mass Extinctions Periodic, And Are We Due For One? (Synopsis)

65 million years ago, a catastrophic impact from outer space caused the last great mass extinction on Earth, destroying 30% of the species that lived on our world at the time. These mass extinction events happened many times in Earth’s past, and the Solar System also passes through denser stellar regions of space periodically, as determined by the orbit of the Sun and stars in the Milky Way. 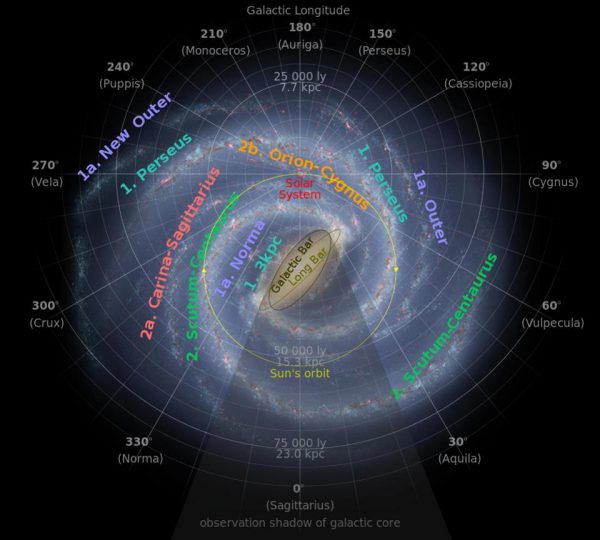 Every 31 million years or so, the Sun moves through the galactic plane, crossing over the region of greatest density in terms of galactic latitude. Image credit: NASA/JPL-Caltech/R. Hurt (of the main galaxy illustration), modified by Wikimedia Commons user Cmglee.

It’s a combination of facts that might make you wonder whether the extinction events are also periodic, and if so, whether periodic impacts are predictable. If so, then shouldn’t we be aware of whether we’re living in a time of increased risk, and prepare ourselves for that possibility accordingly? After all, the dinosaurs didn’t have a space program or the capability of deflecting a dangerous object like the one that wiped them out. 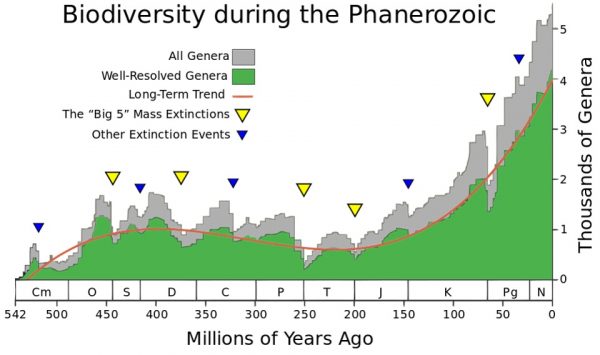 A measure of biodiversity, and changes in the number of genera that exist at any given time, to identify the most major extinction events in the past 500 million years. Image credit: Wikimedia Commons user Albert Mestre, with data from Rohde, R.A., and Muller, R.A.

But before we go that route, we should take a good look at what the data shows. Are mass extinctions periodic? Are we due? Let’s find out!

For the foreseeable future, the Earth isn't at increased risk of a natural disaster coming from the Universe. Instead, it looks like our greatest danger is posed by the one place we all dread to look: at ourselves.

I agree fully with most of that paragraph even though I suspect we weigh the particular vectors of danger differently as you've consistently poo-pooed my wariness over the inevitable dominance of 'artificial' life just as I've discounted your fears of a slight rise in global temperatures leading to all our doom. However it is the last few words I'm curious about. Do you think that as a species we don't do introspection well?

I’m of the opposite opinion. In fact I believe a significant portion of our human brain is specifically devoted to the task. There are a number of experiments that indicate the thought process works backwards of the way most laymen believe it to. The deliberative process where you take input from your senses, weigh it against your experience, evaluate the pros and cons, and then make a decision on how to proceed is an illusion. In reality your lower level “subconscious”, what I call your “lizard brain”, makes the decision immediately and well before any of the conscious process begins. There is strong support for that idea published by Benjamin Libet in what are called ‘The Libet Experiments’.

Although the later conscious deliberation can override the preexisting decision it almost never does. Instead the conscious deliberation seems to exist mainly to create an inner narrative to justify the decision socially. Adding fuel to the idea is a group of people with a certain type of brain injury in which the communication between the optic nerve and the visual cortex doesn’t happen. Such people are blind. They can’t see, but when shown a funny picture they will smile. When asked why they smiled the subject will respond with something like “they just had a funny thought”. Such blind people can also walk down a hallway and veer one way or the other to avoid obstacles with the stated justification that “they thought the other wall would be smoother”. It is referred to as “blindsight” or “subconscious Sight”

In people with blindsight, the conscious mind is just doing what it always does; creating a narrative after the fact to justify the decision made by the lizard brain, which uses another part of the brain for processing input from the eyes, but without information from the visual cortex relied upon by the conscious mind the justifications come out as nonsensical. We seem to have evolved a quick-thinking core that has served to keep us alive when milliseconds count, and a slower introspective conscious structure which serves us in forming social groups. I believe that same structure also works on the collective level with the result being tribalism.

Were the last few words just a throw-away bit with truthiness feel used only to provide punctuation to the end of your piece? Or is there an epistemological school you are drawing from for that statement? Do you think that as a species we don't do collective introspection well?

No sense worrying about it.
In the evolution of the cosmos and life, what will be is what will be.

I understood that our solar system orbited the Milky Way, (sure enough), but that it stayed within the confines of the particular arm of our galaxy and that it is the whole galaxy which is revolving. This article is implying that our solar system moves independent of the galactic structure we are currently positioned in. Have I read this right?

@Greg,
All stars in arms of spiral galaxies constantly move in and out probably.
Notice here:
https://www.youtube.com/watch?v=-qlV5hjIJm0

@Greg #3: The visible spiral arms are what are known as "density waves." They are persistent structures, but not composed of the same stars all the time.

If you drive, you've participated in density waves yourself! When you have freeway traffic with intervals of stop-and-go alternating with higher, smoother speeds, those are density waves. An aerial view would show the "stopped" section persisting in the same freeway location, but the individual cars catch up to it, slowly work their way through, then speed up again to the next one.

Twist ending on that article.

It seems that in less than one year after beggining to work of the folowing telescope which is designed to find and study about the atmospher of the planets of neighbor stars for existing of life we will be able to reach to a lot of informatin about the possibility rate of crashes in moons and planets by studying about the dusts of planets of other stars which give us the number of big crashes that had happened newly in other terresteral balls in orther to reach to a more precise chance of next possible inpact on the earth.