Ask Ethan: Is It Foolishness To Dream Of Terraforming Mars? (Synopsis)

"It would be great some day to have astronauts in a rover on Mars. But just about anyone except an oil company executive would say its more important to have 50 million solar powered vehicles in the United States." -Brad Sherman

Is terraforming a real possibility for Mars? It seems like one of the most inhospitable places we could have asked for: cold, small, barren, devoid of liquid water, with only a thin atmosphere, and with soil that’s toxic to terrestrial lifeforms. Yet Mars was once a wet, thriving planet, teeming with all the potential for life that an early Earth once possessed.

A possible pathway for the eventual terraforming of Mars to be more Earth-like. If you want the planet to be habitable without a controlled pressure environment, it always starts with the addition of a thicker atmosphere. Image credit: English Wikipedia user Ittiz.

Could it get there again? It’s certainly a more daunting task than any environmental crisis we can envision taking place on Earth, since we’d pretty much have to add an enormous amount of atmosphere to Mars to make it habitable. Even if we could, the atmosphere would be stripped away by the solar wind... but that might not be a dealbreaker! 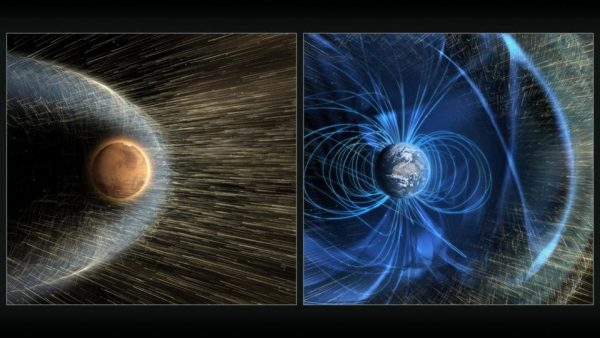 Mars, the red planet, has no magnetic field to protect it from the solar wind, meaning that it loses its atmosphere in a way that Earth doesn't. But the timescale over which Mars will lose an Earth-like atmosphere needs to be calculated. Image credit: NASA / GSFC.

If we could add that atmosphere, all those other problems would be pretty straightforward to deal with. Find out how on this edition of Ask Ethan!

I think carrying large amounts of water and/or atmosphere from Earth to Mars would be a bad idea. Only possibility I see is if we can modify orbits of large asteroids and comets someday to collide with Mars to add both mass and water, and also make its orbit come closer to Sun. (Oxygen can be generated by separating some of water to oxygen and hydrogen, and releasing hydrogen to space. Also it maybe possible to generate lots of inert gas from rocks/soil.)

Good One! For several reasons.

@Frank,
Fooling around with planetary orbits is an excellent plot device for unintended consequences. It would be kind of a bummer if you killed off life on Earth trying to make Mars more hospitable beach front property for billionaire idiots like Musk who want to live there.

I think what I said above could be possible only if humanity could invent an energy source very much like the Arc Reactor in MCU and that is a very big if I am well aware.

I am well aware of the giant risks of such a plan. It should not be considered unless as a last option, even if we have the tech needed someday.

Steve, FL.
So a magnetic field not needed to maintain the atmosphere. Cool.
However there is still the issue of radiation exposure without one, unless you live underground or under a dome. That said, I read once in a proceedings of a conference on colonizing Mars (that I can't find darn it) that the increased risk of cancer over a lifetime would still be a fraction of that incurred by smokers on Earth. So dryly, they suggested that we only send smokers to Mars but without cigarettes and we improve their health!
That assumes they don't slay each other one the way there......

Last I looked we have not solved the very basic problem of gravity. We know that areas of the body (eyes, heart, etc.) begin to break down once they are in anything less than 1 Earth gravity, and no amount of exercise can stop this process. Yet I seldom see it even mentioned. Until we get a LOT better at understanding and then controlling gravity itself, we aren't going to be sending 'colonies' of humans to live anywhere besides Mother Earth. Not if they want to survive longer than a few years.

CA Armstrong,
do you have a citation for 'anything less than 1 Earth gravity' being impossible to counteract?
I know we have lots of experience at zero G, but less at 1/2 or so.

I think that none of the planets and their moons in our solar system will not be a good choice as a second habitant place even for one pecent of the earth's population even if we will design for the year 3000 and the best place for a second habitant place is the orbital near the sun where the gravity is equal to earth's surface gravity(1 earth gravity) ,because in that orbital we can use the energy of sun to make and send many city-space-ships to rotate in that orbital and we will be able to prvide all their needs for living in bigspace cities by easily energies'provided by using sun energy batteries and the other tecnological problems for making and sending to that orbital will be in our access before the year 2500.