"Chlorine is a deadly poison gas employed on European battlefields in World War I. Sodium is a corrosive metal which burns upon contact with water. Together they make a placid and unpoisonous material, table salt. Why each of these substances has the properties it does is a subject called chemistry." -Carl Sagan

Every beginning chemistry student learns what happens when you put a chunk of sodium metal into water: you get an extremely violent reaction out. The sodium and water bubble and fizz, and sometimes even a flame or an outright combustion reaction is produced. This isn’t exclusive to sodium, either, but occurs for lithium, potassium, rubidium, cesium and more.

Elements in the first group of the periodic table, particularly lithium, sodium, potassium, rubidium, and so on, lose their first electron much more easily than any other elements. Image credit: Wikimedia Commons user Sponk.

We can describe these chemical reactions using basic chemistry, of course, but there’s a more fundamental reason it occurs: the laws of quantum mechanics. By combining the laws of electromagnetism with the Pauli exclusion principle and the shapes of electron orbitals, we can understand the full step-by-step process by which this occurs. Thanks to these laws, a reaction that had been described for hundreds of years can now finally be fully explained. 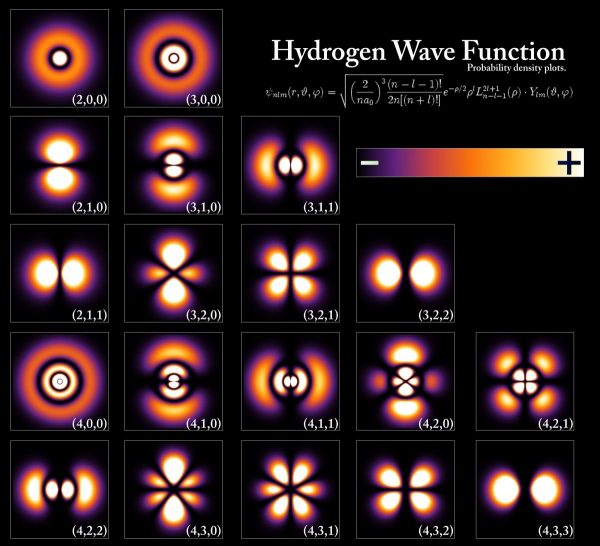 The energy levels and electron wavefunctions that correspond to different states within a hydrogen atom, although the configurations are extremely similar for all atoms. The energy levels are quantized in multiples of Planck's constant, but even the lowest energy, ground state has two possible configurations depended on the relative electron/proton spin. Image credit: PoorLeno of Wikimedia Commons.

What’s the quantum reason sodium and water react? Find out on this edition of Ask Ethan!

The rocket engine photo caption is curious. Rocket engines don't use atmospheric gaseous oxygen when running. They have to carry all of their own oxidizer with them also, along with their fuel.

The low molecular weight is highly desired in rockets for obvious reasons, but isn't the primary driving factor in its preference as a fuel. Even more highly desired than low weight is its thrust efficiency per unit of fuel (specific impulse). Other factors come into play also depending on the application. But for lifting mass into orbit the amount of thrust you get per unit of fuel/oxidizer drives the equation.