“We [are] a species endowed with hope and perseverance, at least a little intelligence, substantial generosity and a palpable zest to make contact with the cosmos.” -Carl Sagan

When the Voyager and Pioneer spacecraft were launched, they contained a message emblazoned on them: a map of 14 pulsars, showing the location of Earth relative to them. This was a brilliant idea: showcase bright, unique identifiers, complete with their observed periods and distances from our world, and people would be able to find Earth. If we wanted to be found, it was the best idea 1977 had to offer. 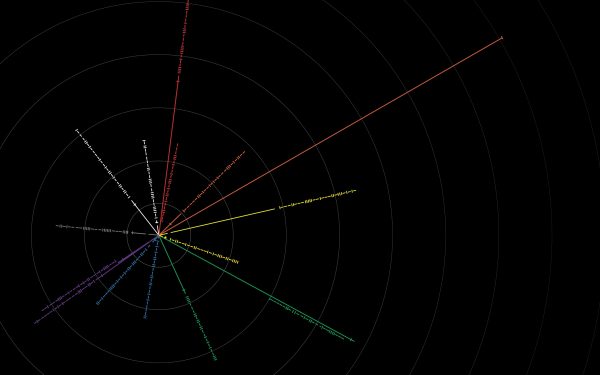 A colorized version of the 14 pulsars encodes information about their relative distance and their pulse timing to 12 significant figures. Image credit: Sam W of Simple Desktops.

But 40 years later, the idea is fundamentally flawed. There are up to a billion pulsars in the Milky Way, their periods change long-term, and their orientations are variable over time, meaning they won’t be pointing at Earth in the future. If we wanted to be detected, we’d be much better off sending the same information we use to detect exoplanetary systems today! 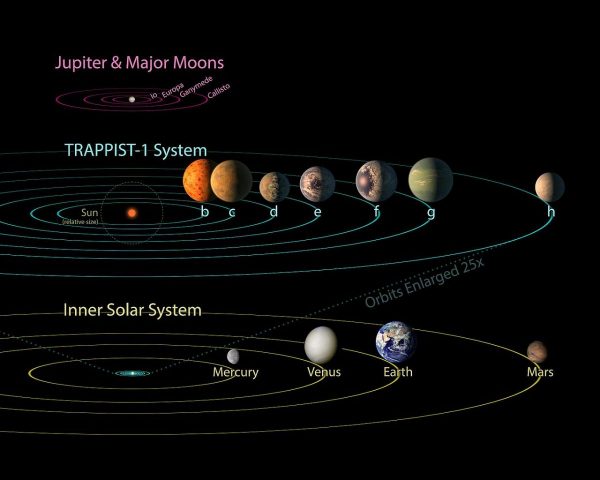 TRAPPIST-1 system compared to the solar system; all seven planets of TRAPPIST-1 could fit inside the orbit of Mercury. By delivering the mass, radius, atmospheric content and orbital parameters of the planets, along with astronomical information about our star, someone with advanced technology could identify our Solar System from afar. Image credit: NASA / JPL-Caltech.

Although it was a very clever idea presented just 10 years after the discovery of pulsars, we now know that Voyager’s cosmic map to find Earth will be hopelessly wrong by the time an alien civilization finds it.

It seemed like a good idea at the time?

Even at the time of the V'ger launch... I thought it was understood that these effects, first proper motion of the pulsars and second the slowing down of the pulse rate would not be an especially difficult task to know where Earth was at the time of launch... that in fact, tracking backwards in time would allow someone to know not only where the launch site was, but WHEN. Far being useless, this map contains more information. So, with this information and a proper motion compensated star atlas, one would know where Earth would be when a beamed signal reached us.

Not that thought that creating even a perfect map was a good idea... frankly a truly sapient species would have understood that using Bayesian logic, that even if only a tiny handful of other species were dangerous, the risks aren't worth taking and it would be better to keep one's head down and NOT announce one's presence to other sentients in the universe. (This is my favorite solutions to the Fermi Paradox.) But we are too foolish and too disunited to follow such a course.

@Candice:
I think Ethan explains very well why any aliens would not really have any chance of finding Earth from Voyager/Pioneer maps.
You are making definitely unrealistic assumptions about what even a very advanced alien race could do.
How about assume yourself in place of those aliens and tells us exactly how they could use the map to find Earth?

Then the odds that humans would still be on earth if they choose to come probably isn't very high either.

Well, that's a relief. I became quite worried about this, after seeing V.

I think the way those maps work is actually mathematically an extremely precise way of indicating 3D/4D location within Milkyway galaxy. (And pulsars acting like galactic lighthouses is just awesome!)

But it creates a huge problem for the receiving end (aliens). Because I think it would require a near perfect data about nearly all existing pulsars in the galaxy, and also consider maybe only way to know about any pulsar is, if only that pulsar is facing its beam directly towards your planet and if you are within its beam range.

Of course also consider how long it would take for Voyager/Pioneer to visit each new star on average and how much stars and pulsars would be different after each visit, and how accurately calculations need to be done to closely determine a 3d location maybe tens of thousands of years in the past.

Once again, those who favor 'could' over 'should' display why they should not lead. It's like watching retarded teenagers bragging about how they have figured out a way to hotwire their parents car and go for a joyride after binge drinking shoplifted booze. What could possibly go wrong?
.
Considering our own species, and our long recorded history of interactions between civilizations at different technology levels, and the predictable aftermath, I'm amazed anyone who considers themselves remotely sane would think it a good idea to attract the attention of another alien species that would have anything at all in common with us psychologically or resource-wise.
.

.
In the event the alien species is even slightly ahead of us technologically,
It ends very badly for humanity.
.
If humanity is even slightly ahead of the alien species technologically, it ends very badly for the aliens.
...
Quite simply, it's a lose-lose proposition when viewed from a biological/historical/psychological/cultural perspective. Even if the incredibly childish 'gee whiz, they are benevolent and want to give us free toys' perspective is taken, it still opens the can of worms about what happens to a culture when they don't have to develop and achieve their own solutions. What happens is they are soon controlled by someone else, just as was proposed in the Star Trek episode 'I Mudd'. You would think astrophysicists would be far more cautious about accepting candy from (alien) strangers.
.
For some speculative fiction far more entertaining and applicable than Drake's next to useless data hole of an equation, consider 'Wasteland of Flint', by Thomas Harlan. The simple idea presented is, even if the aliens are long dead (quite likely), their surviving machines will be deadly if humans can understand and use them as it would be like introducing cavemen to nuclear weapons. If the machines are beyond us, but can understand what we are, quite likely they will treat us as an incursion or biological infestation that should be fumigated, culled, and/or a potentially dangerous threat given time to develop further. Humanity has already had both these reactions to other human cultures and animal species many times already, so it really isn't a stretch to propose other sentient species would have similar reactions given similar survival imperatives.
.

The map and the golden record were never meant to be a plan to be found. It's about publicity; there's something romantic about casting a piece of ourselves out among the stars.

We're broadcasting far more locatable radio waves into our local universe. Although it is unclear how far those waves will be detectable above the noisy background of the universe, they should be detectable for tens of thousands of Voyager travel years. If you're really worried about alien invasion, the gold records should be the least of your worries.

In hindsight, it would have been better to put together the astronomical properties of the Sun, along with the masses, radii, atmospheric contents, and orbital parameters of the planets. After all, those are the pieces of information we use to identify exoplanet systems today, and would be the best way to, on a long-term basis, identify our Solar System.

This sort of information on Solar System parameters does seem to have been included on the Voyager Golden Records too though.

Worrying about the risk of Voyager leading hostile aliens to find us is the sort of problems humans are not good at.
Anything with a 0.001% chance of 100% destruction in 100,000 years is unfathomable. We can care barely deal with global warming threat rationally.

Just my luck, I'll win the Powerball jackpot the same day the aliens arrive to eradicate us.