The Terrifying Physics Of How Wildfires Spread So Fast

"I'd rather fight 100 structure fires than a wildfire. With a structure fire you know where your flames are, but in the woods it can move anywhere; it can come right up behind you." -Tom Watson

On September 2nd, a group of teenagers were lighting fireworks in the Columbia Gorge near Eagle Creek. They would light them and attempt to throw them into the river, playing a game of "let’s try to almost-but-not-quite commit devastating arson.” Guess how that game ended? With a catastrophic wildfire that, four days later, now engulfs over 10,000 acres, forcing the evacuation of thousands of people, creating millions in damage, and threatening the city of Portland, OR. 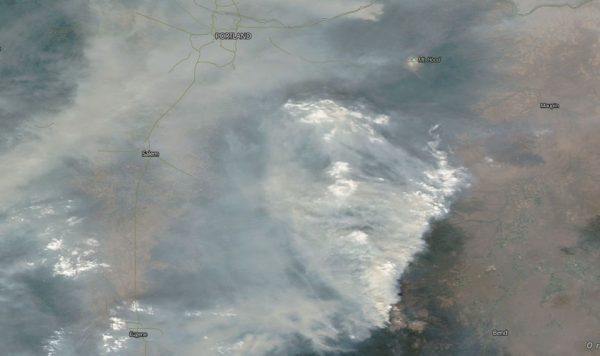 Smoke and haze have filled the entire valley to the west of the Cascades, causing a severe air quality warning across much of Oregon and Washington states. Image credit: NASA.

It’s not just the spark that caused this devastation, but rather the conditions that set it up. Extremely wet, rainy winters and spring lead to a tremendous amount of new plant growth, while the hot, dry summers have turned that growth into potential fuel. Add oxygen, which is free and abundant, and a single spark, and a fast-spreading fire ensues. Throw in the winds inherent to the gorge, and an 80-mile stretch is already up in flames. 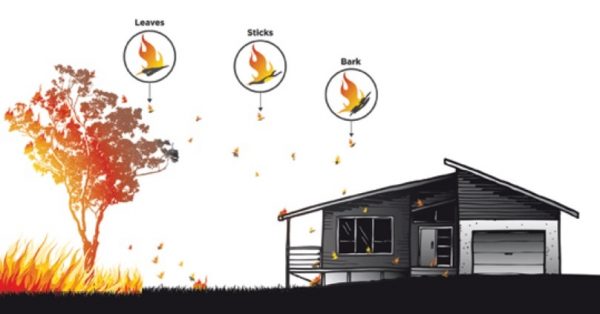 When embers from a lit tree burn leaves, bark, or twigs, they can travel, via wind, to homes, other flammable areas, or even across rivers. An ember attack can even cross deliberate firebreaks if the flaming debris is high enough and the winds are strong enough. Image credit: Country Fire Authority (CFA) / Victoria State Government, Australia.
Tags
environment
Physics
Categories
Physical Sciences

Or rather The Terrifying Actions Of Environmentalist Cause Disaster.
Thank a Spotted Owl

I think people who claim wildfires are good and necessary for nature to refresh itself should watch this well and reconsider!

I think all forests should be divided into small patches to prevent any wildfire from spreading too much, unless we claim we could always stop or prevent them from happening in some other way.

@Frank - There are a number of plant species in the American west that do rely on fire temps to open seed pods of various kinds. Giant Sequoia and to a lesser extent Coast Redwoods.

Fire in the west is also an integral part of the regeneration of the land.

The problem with trying to alter the forest to limit the spread of fire is that you can't really make the spaces big enough to prevent the fire from leaping. Case in point is the Columbia Gorge fire itself. The fire lept from the Oregon side to the Washington side of the Columbia River, a distance I think is at least 1000 ft.

Or rather The Terrifying Actions Of Environmentalist Cause Disaster.
Thank a Spotted Owl

Are those species of plants which rely on wildfires, exists in all forests on Earth? How many species of plants and animals live in each forest which don't rely on wildfires, versus how many do? Are those species which rely, would go extinct if we prevent wildfires? Just allowing small patches to burn would not be enough to save them if really needed? How about damage caused to humans living in or around forests?

As for "it would not work anyway" attitude, I would say it would allow much easier access for firefighters, and also even just slowing wildfires would provide extra time to better prepare for them.

(Also I am guessing there must already be successful examples and/or experiments on how to modify forests against wildfires, somewhere, current or past, but I am lazy to research :-)

Well, it would seem prudent that the first and best line of defense is for humans to stop setting wildfires.

After that, all your other questions are worth exploring. I don't have all those answers, by any means. I was limiting myself (without stating it as such) to the American west.

@Dean:
I think what Ragtag really meant was environmentalist view that we should allow wildfires is the real cause of this disaster; not really those children who decided to play with fireworks in the forest. (But of course, children need to be taught on this. But I don't think school education can change all children for better.)

I was under the impression that the National Park Service had corrected its earlier policy of preventing/suppressing/stopping the "natural" forest fires. As I recall, that policy led to the accumulation of additional dead undergrowth that had contributed to the severity of those forest fires the NPS could not control.

Old growth forests are the greatest absorbers of CO2 (this is a very recent discovery, exactly the opposite to what was long assumed). So old growth forests should be preserved as much as possible, to delay anthropogenic global warming.

All the more as, as the greenhouse proceeds, and temperatures rise, the forests tend to dry up, and catch fire. The best weapon against the massive fires are controlled burns of undergrowth in winter, and the deployment of massive air tankers, ASAP. Air tankers operating at night would be a great progress, as many fires tend to develop quickly shortly before nightfall (that's when winds pick up, heat is maximum, and criminals know this!).

As the greenhouse advances, we have no means to slow it down, no means except those forests. Thus forest management in winter and air tanker fleets are massive investments worth making, as most forests in the temperate zone, the mountains, and even the Arctic, are going to be threatened by fire in the coming years. Not only plants dry up, but, as parasites are not killed by the cold in winter anymore, they attack genetically unprepared trees...

John @8: I was under that impression too, but I think the mistake and correction you're talking about occurred back in the 80s or 90s.

Frank @5: this is not my field but as I understand it (1) no they don't exist in every forest on Earth (2) I think relatively few rely on burns (IIRC, it's some species of conifers, whose cones don't open until extreme heat is applied to them) (3) hard to say. (4) No, because it's not like each individual species of tree grows in a separate spaces. (4) we try and save them of course. Just as we try to save people who live in a flood zone from floods, in tornado alley from tornadoes, near the Caribbean from hurricanes, etc.

Thanks for the concurrence and the date ranges. I thought the correction had occurred, but wasn't at all sure when.

I don't know about what policy correction is done but evidence shows it was not enough.

I think looking at few plant species that needs wildfires and concluding all wildfires are good for all plants and animals seems like a logical fallacy of over-generalization.

The key element is here the wind. It makes me wonder when you collide particles and the Earth is moving at 600 km/s through space if on part side of the detector runs into more particles than the other as with the doppler-effect, or how the house in the picture gets hit by the embers.

Frank, what has happened over the years is that commercial logging industry has been knee capped by the environmentalist in the pacific northwest. The spotted owl was a big battle between industry and environmentalist in the 80's and to this day has ramifications.
You have to properly manage these lands to keep old dead under brush and timber cleared out and create fire breaks ect but enviro wackos freak out at the thought.
Stuff needs to be cleaned out. Otherwise it's a tinder box.

Mh, it was more about having a compass of how the Earth is moving through Space in relation to the CMB, and if you then have a series of particle collisions (small GWs), what the trail of these drops looks like. Sort like the siren of an ambulance with one side of the detector always running into the signal vs the other running away.

@Elle H.C.
Does the Higgs Field have any affect as we move through space?

The idea of the Higgs field evolved out of Goldstone bosons:

"when you have both gauge symmetry and spontaneous symmetry breaking, the Nambu–Goldstone massless mode can combine with the massless gauge field modes to produce a physical massive vector field."
https://en.wikipedia.org/wiki/Higgs_boson#History

… and to give you an idea of these Goldstone bosons:

Now what do you think?

Not every science discussion needs to start with a Culture War rerun.

Mh, it was more about having a compass of how the Earth is moving through Space in relation to the CMB, and if you then have a series of particle collisions (small GWs),

The CMB is photons; they have no mass with which to produce gravitational waves. And being in the microwave region, according to the photoelectric effect they can't produce nuclear reactions. Lastly, the intensity is so low that if those microwaves produced gravitational waves, then your local cell tower (pumping out, I SWAG, orders of magnitude more than the 10E-18 ergs/sec... shown for the 2.5 GHZ frequency) would be throwing objects around.

No, that's not what I was talking about, it was about the CMB being a reference frame as how we move through space as in this post: https://www.forbes.com/sites/startswithabang/2016/04/01/how-fast-does-e…

… and figuring out what trail a point on our planet leaves in Space.

Not just countless trees and plants but also countless animals and their offspring burns to death in each wildfire, correct? (Not to mention human deaths and property damage each time.)

If we are really capable to put an end to wildfires keep going out of control, don't we have an ethical responsibility or not? Do we really have a strong enough ethical counter-argument against this?