Inflation Isn't Just Science, It's The Origin Of Our Universe

"There's no obvious reason to assume that the very same rare properties that allow for our existence would also provide the best overall setting to make discoveries about the world around us. We don't think this is merely coincidental." -Guillermo Gonzalez

Beginning in 1979, a new idea arose in theoretical physics, seeking to improve upon the idea of the Big Bang: cosmic inflation. Recently, a number of physicists, including one of inflation’s cofounders, Paul Steinhardt, have come out with vitriol against the theory of inflation, calling it not even science. It’s true that inflation may not be the final answer to absolutely everything in the Universe, as there are a number of indeterminate predictions and a number of puzzles it fails to adequately solve. 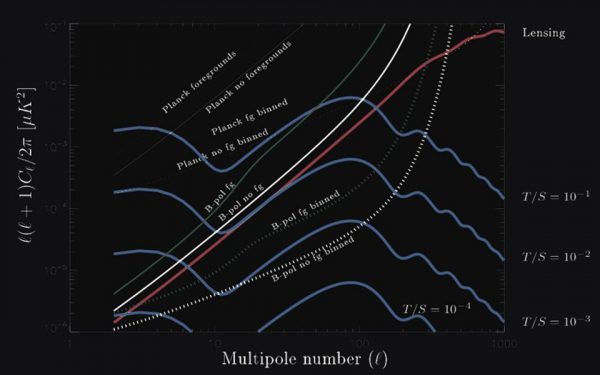 But that does not mean it isn’t science! In fact, inflation is the best theory we have to explain the initial conditions that the Big Bang has been observed to begin with. In addition, inflationary cosmology makes a number of powerful predictions that give rise to observables within our Universe, and a great many of them have been subsequently tested and validated. For reproducing the successes of the pre-existing theory, for explaining phenomena the old theory could not, and making new, testable, successful predictions, inflation hits all the points a scientific theory could aspire to. 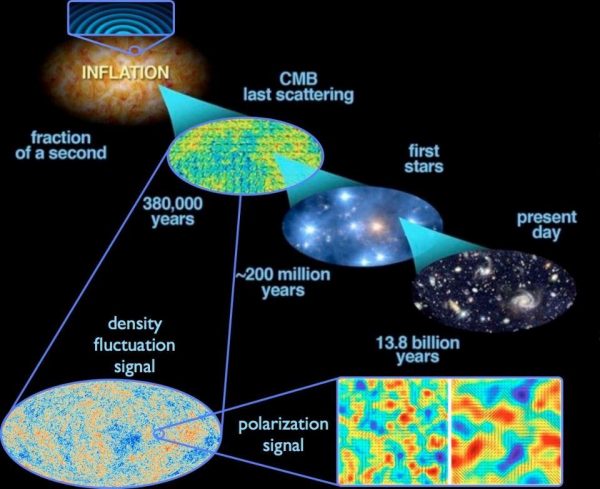 The earliest stages of the Universe, before the Big Bang, are what set up the initial conditions that everything we see today has evolved from. Image credit: E. Siegel, with images derived from ESA/Planck and the DoE/NASA/ NSF interagency task force on CMB research.

It isn’t just a theory; it’s the best descriptive theory of the early Universe we’ve ever come up with. And in pushing the needle forward, it’s a shining example of the best kind of science of all.

Ethan,
A few blog posts ago you had a guest post by Sabine Hossenfelder where she explained why inflation wasn't science. There was no way to determine which model among countless models to use, you are looking for a needle in a virtually unlimited number of haystacks, which really is not predictive at all. Super Strings has the same difficulty with the landscape problem, which description fits which universe when you are going to claim there exist an uncountable number of them? No measurement or calculation is really possible in this scenario.
.
Historical facts are a bitch too, they nag at you whenever you try to change your story to make yourself look good. Especially the fact that the Big Bang Theory isn't actually the Big Bang Theory it used to be in 1927 when it was first proposed by Georges Lemaitre a Belgian physicist and Roman Catholic priest. It was later coined "Big Bang" by Sir Fred Hoyle in 1949 (who actually rejected the idea). It has been altered over and over again, adjusted to fit new observational data, you yourself were admitting this a few posts ago as well Remember? "The Big Bang" wasn't starting with a 'Bang' after all, but you were going to call it the same thing anyway, and brag about its predictions which apparently can change whenever convenient, even when in contradiction to the name of the theory itself. Historically (in this particular universe), the CMB was NOT even a part of the original idea, it was discovered decades later, then it was incorporated even later (after 1964 when CMB was purportedly discovered), which you well know if you ever picked up a book about the history and evolution of the idea of the Big Bang theory. What you have is something you are calling the same name, as if it was the same idea, but has actually been modified and tinkered with many times to fit new data in order to prevent itself from being falsified. This in essence is changing your answer to make it look right whenever it starts to look wrong, so it can never be wrong...or falsified. Now you yourself are talking about importing another idea into the first idea...and still claim it is the same original idea. This is dishonest propaganda. At least admit you are creating a new version (model) of a previous idea, slap a label on it like Big Bang 2.0.0.1 so people can keep track which of the many versions of your 'highly predictive' story you are referring to, otherwise, the entire theory itself becomes just an over-elaborate 'pea in the shell' scam.
.
“The past was alterable. The past never had been altered. Oceania was at war with Eastasia. Oceania had always been at war with Eastasia.”

Ethan, I'm generally a fan of your sensible take on things but I'm surprised you would dimiss the objections to inflation raised by Steinhardt and others (also expressed in Sabine Hossenfelder's recent guest appearance here), without properly addressing those criticisms. You've basically reiterated stuff you've said before about which cosmological problems inflation solves (nothing wrong with reiterating stuff), but you've ignored (for example) Hossenfelder's recent arguments for why they weren't actually problems to begin with, and this doesn't look good. Any chance you could be more explicit about what you think Hossenfelder has misunderstood or is mischaracterising? It would help in following this debate.

Also: what do you make of this, which claims to do away with the need for an inflationary phase: http://nautil.us/issue/53/monsters/the-universe-began-with-a-big-melt-n… ? Can you tell whether the paper referenced is serious work?

Oh Snap Fred, Now Ethan would have to change the blogs name to "Starts With A Melt"... LOL