Oh dear, I've already had a Currygate. Never mind, the internet has the memory of a goldfish, I'll get away with it.

The story so far: Leaked Email Reveals Who's Who List of Climate Denialists. No great surprises on the list; I personally wouldn't call Curry a "denialist" though I would definitely say things she won't like; I announced her "departure for the dark side" in 2010. Anyway, the obvious question is, does this make wiki? And it has, but the obvious suspects don't like that: 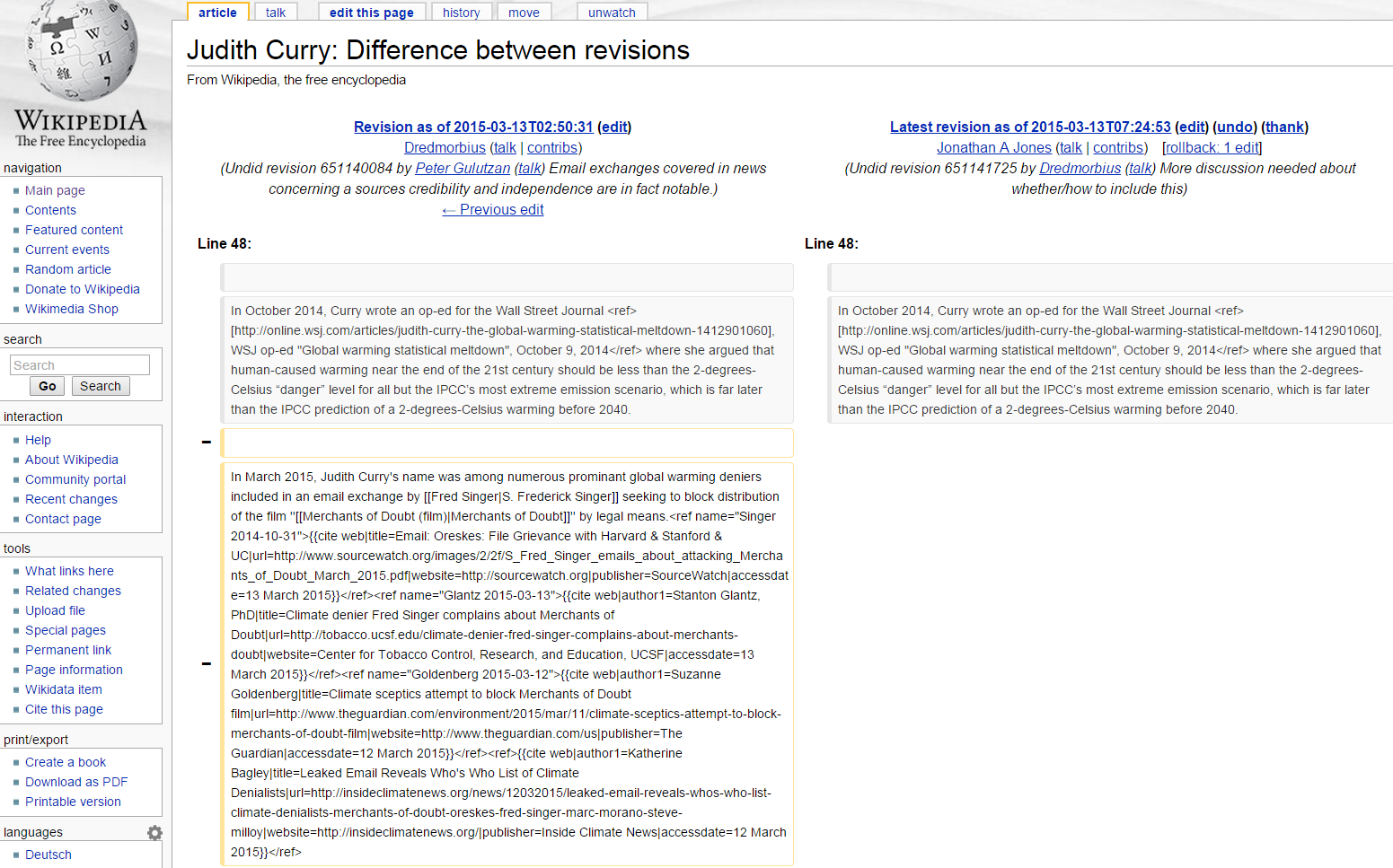 If you're wondering, the disputed text renders as

In March 2015, Judith Curry's name was among numerous prominant global warming deniers included in an email exchange by S. Frederick Singer seeking to block distribution of the film Merchants of Doubt by legal means.[21][22][23][24]

There are the usual gobbledegook reasons for taking it out.

People are there for AW, too:

Anthony Watts attended [[Purdue University]]... According to writer [[John Grant (author)|John Grant]], there is no record of him graduating and he has been unwilling to discuss his education.

Notice that not only must the information in the article be disappeared, but the direct quote in the reference is whitewashed out too. This is the work of "[[User:A Quest For Ignorance]]". See talk.

* The Google Conspiracy - and a Google search engine customised for science deniers from Sou. And guess who is invited to the party?

To describe Curry as a "climate denialist" simply because Singer sent her an email s absurd.

[True in itself. OTOH, Singer didn't put that list int the public domain. He would not have CC'd it to me. He sent it only to people who he thought would give it a sympathetic hearing. And Curry did not leak it -W]

JC rejects the scientific consensus. She denies its validity. That is the sense in which the adjective is accurate. It'll do for me.

I can't think of any useful definition of science denial that doesn't include Curry's behavior and statements on climate.

I see Russell Cook's name on the list. Take a look at his imdb.com user review for 'Merchants of Doubt'. He rated the film 2 stars.

"I plan on seeing the movie when it comes out, but in the meantime..."

I see Tallbloke has an IMDB comment, which re Curry reminds me of the Lisbon T-shirt.

Who isn't on Lindzen's email list- MIT has been online since back when a modem meant a telex.

Beware, lest junkmailgate indict everybody , WHOI NASA and Scripps included , and drive the climate wars on to Hillary's server.

Surely the best way to defeat a bad scientific argument is to engage with it and show how it is in error. Denying people free speech in the media only fuels the flames....
Cordially Rog Tallbloke BA (hons) Hist/Phil Science

Is somewhat at variance with his being the censor who denied me the freedom to adduce scientific arguments at WUWT.

Is somewhat at variance with his being the censor who denied me the freedom to adduce scientific arguments at WUWT.

We must remember that "a foolish consistency is the hobgoblin of little minds, adored by little statesmen and philosophers and divines".

Wait,well known denialist Tallbloke has a BA in history and philosophy of science? Did he learn nothing from it?

In my experience Tallbloke seems to have a remarkably limited vocabulary for someone who has earned a few letters after his name:

Has anybody here seen his degree certificate?

"... "My sole aim [in pursuing the case] is to help restore climate science to something more closely resembling scientific norms," Jones said."

Roger Pielke is also on the list. I was under the impression that you were a fan?

Do we know who leaked the email?

[There appears to be some doubt as to which RP is on the list, and which was intended. But I think its the Sr, not the Jr, on the list. As for the leaker, I don't know -W]

While Rog's blind scientific eye means he can recycle Pudesey political swag-- the eponymous bear is a BBC children's hospital mascot--, Judy was <ahref="http://www.northdevongazette.co.uk/news/bideford_woman_knits_pudsey_dre… lucky to get off with a T-shirt !

> "Who isn’t on Lindzen’s email list- MIT has been online since back when a modem meant a telex.

Beware, lest junkmailgate indict everybody , WHOI NASA and Scripps included , and drive the climate wars on to Hillary’s server."

cmon russell. the emails were a little more targeted than that.

Russell - Rog is merely a "prospective parliamentary candidate" for Pudsey. The constituency which is part of Leeds, not the bear!

Getting back to Judy for a moment, she seems more than happy to continue to promulgate Mail on Sunday garbage, even long after the MoS has "corrected" it:

She's definitely on "the dark side" IMHO, but what do I know of such matters?

Progressives should strive to move the biological diversity in climate wars discourse on past Manbearpig and the odd weasel or march hare.

Climate Etc. First Commenter Omanuel already has a lock on Sexual Harassment Panda and new armorial supporters like Pudsey Bear will be needed should UKIP or the Greens ever dictate an Honors List.

You'd think Christopher Booker would have Private Eye on the case by now-- there must be some True Stories innit.

Russell, you do know that Booker has had nothing to do with Private Eye for decades now?

guthrie; my bad for not fact-checking the Telegraph, which last year asserted he was still a ' jokes editor' at the Eye

@21 - Russell, is that the job description for the content manager at C Etc. ?

[Spammed. You're not "PlanetaryPhysicsGroup", you're just yet another Doug Cotton sock -W]

Nevertheless, Judith Curry fulfills an important role in getting the "science" out to interested parties. Like Canada's Financl/Natnl Post newspapers. These folks are on the front line of educating Canadians and Canadian business that climate change is a minor issue here and everywhere else. And Canada's environment minister apparently gets much of her information from the F/NP, so it must be good. My guess was that Pauchuri's exit would provide an excellent excuse to ignore his personal situation and focus on the IPCC's evil ways, and reinforce the current crop of denialisms. And Judith Curry came through for me!

[Thanks. Added to the refs of the Pachi post -W]

Russell #21 - maybe that was the joke? Obviously I don't know exactly who works there, but everything I've read indicates that he left decades ago and the magazine moved in a different direction.

Guthrie #25 - According to Wikipedia, Booker co-founded Private Eye in 1961, was ousted by Ingrams in 1963, returned in 1965 and has been there as part of the "joke writing team" ever since. Hard to verify, as PE are a bit secretive. I know he used to have a regular column, but I haven't bought or seen the magazine for many years, and presumably that stopped long ago.

This has reminded me that I have a stack of Private Eyes from the 1960s in my loft. I might dig them out to see if Booker has ever held a sensible opinion on anything.