Is Quentin Letts a tosser?

I was pointed at What’s the point of BBC guidelines when it comes to climate change? in the Graun by Richard Black (director, Energy and Climate Intelligence Unit and former BBC science and environment correspondent (errm, I mean that's who RB is. It wasn't him that pointed me at that piece)). And QL's offence is What's the point of... the Met Office?. The Conversation didn't much like it either. 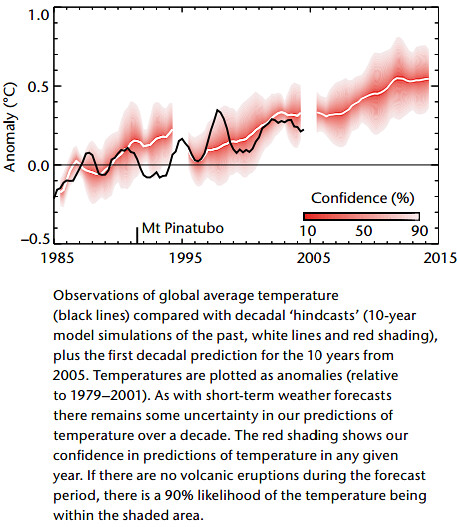 After that, there's a load of light-entertainment stuff, which I think is typical: the point of the programme is mostly entertainment, with a slight element of history or education. It skips lightly from weather forecasting to climate, and makes the usual tedious jokes about forecasting. At about 3:50 we segue into some bloke who has his own pet forecasting theory based in mustelid scent glands... then we get Piers Corbyn, who prefers badgers. I started skipping a bit cos it got boring... then Graham Stringer, and Peter Lilley, who've both joined the GWPF. Say no more, squire. Lilley reads out:

We are now using the system to predict changes out to 2014. By the end of this period, the global average temperature is expected to have risen by around 0.3 °C compared to 2004, and half of the years after 2009 are predicted to be hotter than the current record hot year, 1998

which is, as he says, from the glossy Climate research at the Met Office Hadley Centre: Informing Government policy into the future, section "Forecasting the next decade". Its not a particularly happy piece of text; its in fairly small type (the typography of the whole thing is weird, as though they never expected anyone to actually read it); and is prefixed by "On a timescale of several decades the prediction of global warming is now robust. However, over the next few years natural variations may either amplify or offset some of the warming..." and so on, but meh. Lilley self-identifies as a "lukewarmer", i.e. someone who thinks that Al Gore is phat.

It got somewhat boring after that and I stopped listening carefully... some sheep... alarmism... biblical... Anyway, enough of QL. The picture is some version of Met Office decadal prediction system: DePreSys, which has doubtless advanced since those days, though I've lost track.

Speaking of which, what the question, again? Oh yes: QL: tosser or not? Pffft, who cares? R4 abandoned its cultural mission years ago in favour of entertainment; if you want climate science do what everyone else ought to and read the IPCC, or wiki, or RC.

QL: tosser or not? Pffft, who cares?
Sure, but I still think the answer's "yes".

08/03/15 MMBC NEws Channel had an interview via Skype about Obama's energy plan ... with Marc Morano.

Even a few months ago, I respected the BBC, but no more.

Would it be an idea to privatize Radio4, rather than the MetOffice? If Radio4 anyway has no standards any more.

[I still listen to the morning and evening news; there is still something there -W]

Everybody is a tosser when it becomes hot enough.

Yikes, reading that BBC piece makes me wonder about their editorial supervision: "From it's (sic) origins..." " Quentin finds out it's (sic) future..." etc. Ironic given that they take the Met Office to task for "clangers."