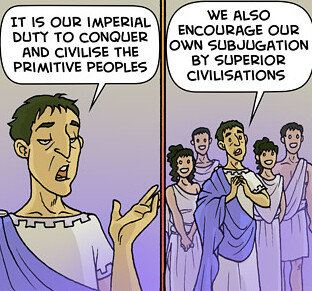 Episode 1 and episode 3 refer. It turns out that Exxon cares enough to answer. Not to answer in any great detail, so I'm not sure they care enough to read the criticism, but never mind. They say stuff like

Our scientists have been involved in climate research and related policy analysis for more than 30 years... participated in the United Nations Intergovernmental Panel on Climate Change... We fund and partner with many universities on climate modeling and research into lower carbon fuel sources and other climate-related issues.

And so on. True enough, but not desperately meaningful, because an organisation as large as Exxon can afford to throw a few bucks that direction just to look good, if it feels like it. And of course it totally fails to address the kind of drivel that Lee Raymond used to spout: only four percent of the carbon dioxide entering the atmosphere is due to human activities... [that] it will affect climate defies common sense and lacks foundation in our current understanding of the climate system. And so on. So, just like ICN, they're spinning.

But they do say something of interest to me: And since 20091, we’ve supported a revenue-neutral carbon tax as the most effective, transparent and efficient way for governments to send a signal to consumers and the economy to reduce the use of carbon-based fuels. Mmmm, nice. And they provide a link to ExxonMobil, Paris, and carbon policy which provides more details:

As I have stated here before, the risks of climate change are real and the risks warrant action...

We believe effective carbon policies should do the following:

Ensure a uniform and predictable cost of carbon across the economy;
Be global in application;
Allow market prices to drive the selection of solutions;
Minimize complexity and administrative costs;
Maximize transparency; and
Provide flexibility for future adjustments to react to developments in climate science and the economic impacts of climate policies.

For these reasons... we believe that market-based efforts to reduce greenhouse gas emissions – like a revenue-neutral carbon tax – are more economically efficient policy options than regulations, mandates, or standards.

Um, well. I agree with almost all of that: carbon tax good, ETS stupid. I doubt I could find a single pol from either side of the USAian hopefuls who could say anything even half as sensible. The only one I'd quibble is Be global in application, because it can easily be a smokescreen for inaction since someone else hasn't done it. If you replace it with Have the potential to be global in application, whilst able to be applied regionally in stages then I'd be happy with the lot. So, to some extent, you'd have to judge them on what they did with this. If all they're doing is sitting back saying "nice weather we've been having recently; carbon tax come along yet? No? Oh well, lets have another beer and wait a bit longer" then that would be rather useless of them.

I think we're entitled to regard this as official Exxon policy. The blog name suggests as much. The about makes it seem somewhat less official; but the constant use of "we" suggests official. Or if you prefer something more obviously official, there's corporate.exxonmobil.com/en/current-issues/climate-policy/climate-policy-principles/overview which says much the same things, although interestingly it replaces "Be global in application" with the arguably better "Promote global participation; Consider priorities of the developing world". And adds It is rare that a business lends its support to new taxes. But in this case, given the risk-management challenges we face and the policy alternatives under consideration, it is our judgment that a carbon tax is a preferred course of public policy action versus cap and trade approaches.

You might well say that all these fine words are all very well, but to say this whilst funding Heartland is somewhat two-faced, no? to which the obvious answer is yes indeed it is. I'd be interested to know what Exxon's official answer is.

Update: Exxon, Chevron Say No Thanks to European Peers on Climate has Tillerson sounding more like Raymond: Climate models that seek to predict the outcome of rising temperatures “just aren’t that good,” Tillerson said, reiterating a position he has publicly advocated at least since his promotion to CEO in 2006. The company is wary of making efforts to reduce emissions that may not work or that will be deemed unnecessary if the modeling is flawed, Tillerson said. “Mankind has this enormous capacity to deal with adversity. Those solutions will present themselves as the realities become clear,” he said. I know that is a very unsatisfying answer for a lot of people, but it’s an answer that a scientist and an engineer would give you.’’

* ExxonMobil on carbon policy and business planning (2013) Policies related to GHG emissions, and carbon emissions in particular, remain uncertain. But, for purposes of the outlook to 2040, ExxonMobil assumes a cost of carbon as a proxy for a wide variety of potential policies that might be adopted by governments over time to help stem GHG emissions such as carbon emissions standards, renewable portfolio standards and others.

[That's a canned response. It tells me you didn't like what I wrote, but I knew that before you said so -W]

Implausible deniability has always been the thing.

[Errm, OK, that's all standard stuff: Lee Raymond... believed that it was a hoax, in effect... And called it a hoax? I’m not sure that he used the word “hoax,” but he in effect said, “I don’t believe there is convincing evidence that the earth’s temperature is going up in a meaningful trend.” But it supports the changeover from LR to RT -W]

Oil and especially gas companies support carbon limits now, because they know that there really is a cap on carbon, and we're fast approaching it. If we impose carbon limits, coal dies first, which means we can overall burn more oil and gas.

Of course they'll prefer carbon taxes over a hard cap: that will eliminate coal just as well but won't be as effective in the end game.

"... throwing its weight behind a tax on carbon emissions"

And also throwing its weight behind lobbying against renewable fuel standards, against new taxes, and much else, https://www.opensecrets.org/lobby/clientbills.php?id=D000000129&year=20…

[How can you tell? If I follow that, I just get a list of bills. I can't ell whether they lobbied for, or against, or just commented. Take one specific example: https://www.opensecrets.org/lobby/billsum.php?id=s577-114 "Clients lobbying on S.577 : Corn Ethanol Mandate Elimination Act of 2015" - I'd hope that Exxon were lobbying against, since corn ethanol is insane. But how do you tell? -W]

and behind re-electing you could guess who
https://www.opensecrets.org/orgs/summary.php?id=D000000129

If they do support carbon pricing, it is interesting that they chose not to sign this:

[I think I saw that addressed somewhere, though I can't put my hand to it right now... however, I can find one fairly ready excuse for them, if they want one: that statement just calls for "introduce carbon pricing systems". Its very careful to avoid saying what sort of system. Cap-n-trade would satisfy that doc; Exxon are quite clear that they don't like cap-n-trade and want a carbon tax (and I agree with them) -W]

I believe ExxMob's position on renewable fuels is the blend requirement shouldn't exceed ~10%. They make gasoline. They have to have ethanol, or a substitute. And I do not believe there is a viable substitute. Without ethanol blended in, their gasoline would be junk.

[I would have assumed their position would be that there should be no requirement; it should be up to gasoline makers. Also, there's no (market) reason why anyone would buy recycled midwest corncobs for this purpose -W]

> I’d hope that Exxon were lobbying against

[the corn ethanol subsidy, which came out of 1960s law against buying cheap sugar from Cuba, which created the corn syrup glut]
https://jasonrriley.wordpress.com/tag/cuban-embargo/

> since corn ethanol is insane.

Squabbling over this stuff is insane, period.

[It doesn't really matter where it came from; where it is now is an insane, anti-environmental, market distorting boondoggle for farmers -W]

> doesn't really matter where it came from

Doesn't it? There's a phrase about being doomed to repeat ....

Much of history reads like most aviation accident reports -- a series of small and large errors and omissions over a span of time, ending abruptly with large avoidable expense. It does matter where it came from, as it came from so many bad choices.

But nobody listens to those gloomy philosophers' warnings.

"And of course it totally fails to address the kind of drivel that Lee Raymond used to spout: only four percent of the carbon dioxide entering the atmosphere is due to human activities…"

to be fair, I did address this (http://pubs.acs.org/doi/abs/10.1021/ef200914u) but it doesn't seem to have had any effect on those that like to use this particular argument, so I don't blame Exxon for not bothering! ;o)

[I didn't realise anyone had published that. Good to see, and for future reference. I'm unsurprised it didn't dent LR (apart from being a few years late :-): he does actually know this stuff, I'm sure; its not lack of knowledge getting in his way -W]

> [ I can find one fairly ready excuse for them,]

Yes, you are quite skilled at that.

[Oh come now, you're better than that -W]