A Martian Supernova for Skywatchers Everywhere!

"When I had satisfied myself that no star of that kind had ever shone before, I was led into such perplexity by the unbelievability of the thing that I began to doubt the faith of my own eyes." -Tycho Brahe

When stars reach the end of their lives, there are many possible fates that they can have. Among the most spectacular, however, are stars that end their lives by going supernova, where a single star can outshine even an entire galaxy for a brief moment in time. 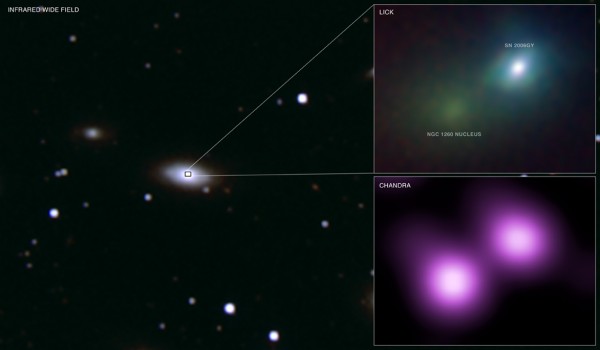 Last year, we experienced the closest supernova in a generation, when a star died a spectacular death in a relatively nearby galaxy.

Although it isn't nearly as spectacular as what we'd get to see if we experienced another supernova within our own galaxy, a phenomenon not experienced on Earth since 1604!

When they occur within our own galaxy, supernovae are so bright that they outshine all the other stars, all the planets, and can often even be seen during the day. They're very rare, though, occurring less than once per century, on average, in our own galaxy.

But there are other galaxies that have better luck than we do. 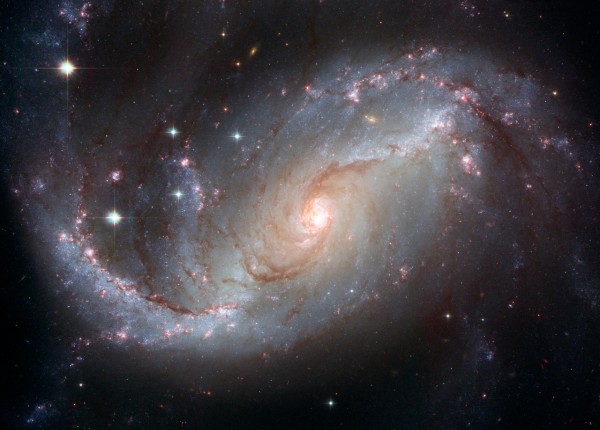 Many galaxies, unlike our own, are actively forming large quantities of stars! In many spiral galaxies, like NGC 1672, above, pink regions can line the arms of galaxies, surefire evidence of recent, intense star formation. Recent mergers, including the gobbling up of small, satellite galaxies, as well as simply the density waves of spiral arms can often trigger this type of star formation all on their own.

But when galaxies gravitationally interact with one another -- even when separated by millions of light years -- they can intensify this ongoing star formation.

With this in mind, let me introduce you to one of the nearer galaxies in our night sky: Messier 95 (M95). 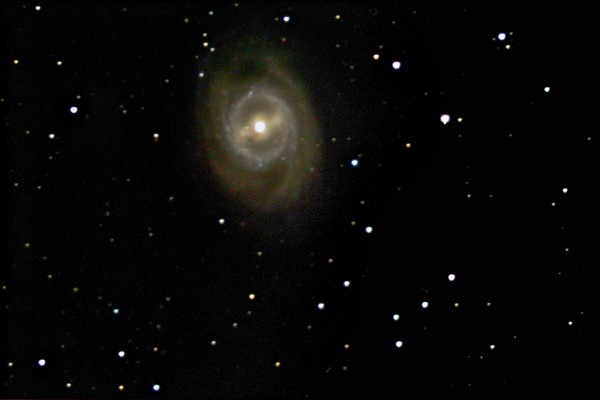 Messier 95 is a spiral galaxy, with strong inner arms and faint outer arms, located 38 million light years away. It's also very close to Messier 96, and Messier 105; together, with a few other galaxies, they form a group! The image below, created by me with Stellarium, shows the entire group, all contained within just a single degree in the night sky. 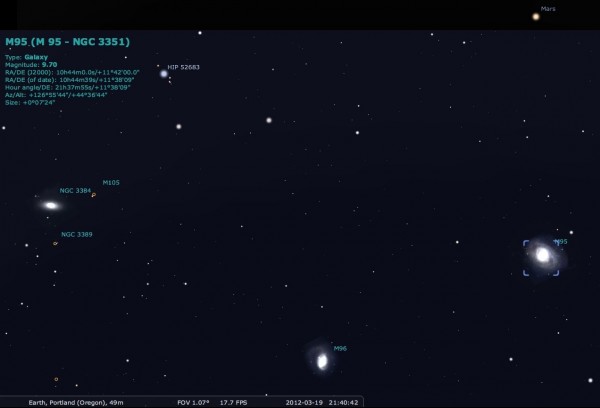 You'll also notice, in the upper right of the image, lies the planet Mars.

Shining brightly in the night sky, Mars, in many locations, is the brightest object visible in the sky during much of the night. It doesn't look like it, in the image above, because I've artificially reduced its brightness by a factor of many thousands. Normally, astronomical observers look for the following traits when they go to take their observations:

But if you want to take a look at Messier 95, you'll want to make sure to leave Mars out of your field of view, otherwise you'll never see the galaxy! Why's that? 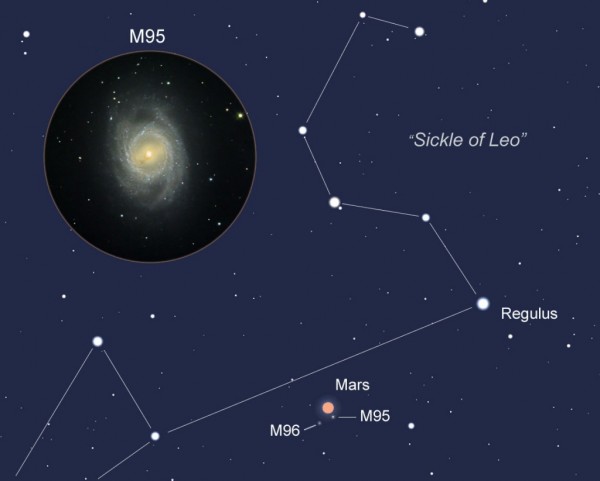 Messier 95 is located less than half-a-degree away from Mars in the night sky, but appears to be about 100,000 times less bright than the red planet right now. On the magnitude scale (smaller is brighter), M95 is magnitude 9.7, while Mars is of magnitude negative one.

But you'll want to see Messier 95 now, because in a region of that galaxy that contained absolutely nothing, a very bright object suddenly appeared just four days ago, and is increasing in brightness; it's got to be a supernova! Zooming in on the earlier image of M95, I want to show you exactly where you should look if you want to see it; anyone with an 8" telescope or bigger (and the proper magnification -- 100x for an 8") should be able to find it! (But no smaller than a 6" under the best of circumstances for now; you'll waste your time looking for it.) 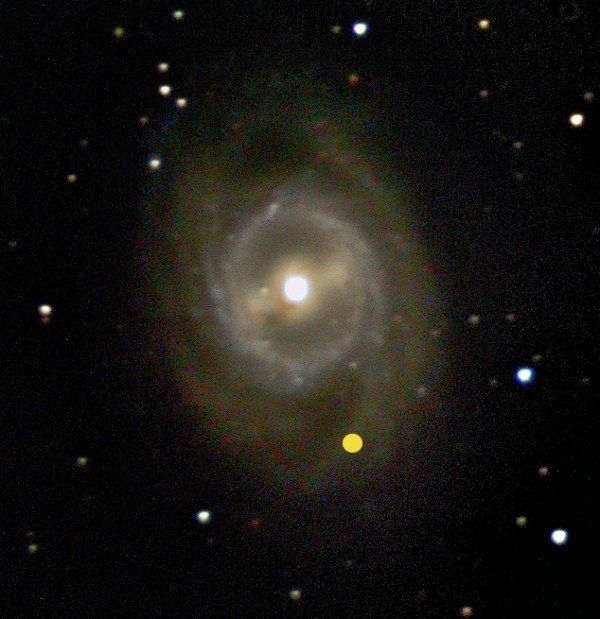 Image credit: Paul and Liz Downing, marked by me.

At this point, we haven't officially determined whether it's a type Ia supernova (formed by an exploding ancient white dwarf) or a type II supernova (formed from a very massive, young star that's finished burning its nuclear fuel), but look at the location: it's right on one of the outer spiral arms! That's one of the key places where young, massive stars form, and so just by looking at that, I can tell you that it's almost definitely a type II supernova.

Want to know what it looks like through a telescope? Take a look, below. 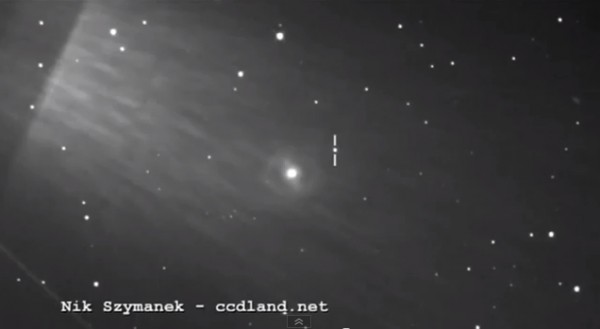 As you can see, marked by the lines, there's a fairly distinct object that looks like a star within our own galaxy. But that's not a Milky Way star, a few hundred or a few thousand light years away, but a supernova in Messier 95, located 38 million light years distant! Over the coming weeks, the supernova will continue to brighten, and will be more clearly visible and more easily seen. But one thing that won't change all that much is that ruinous light pollution, captured by Nik Szymanek, above. 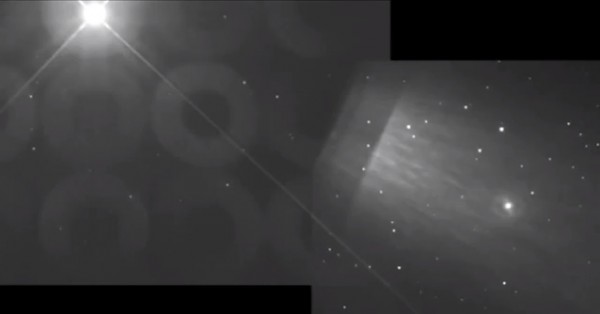 If you want to see more, and you can't wait for the information to unfold, there are two things I recommend you check out. First, David Bishop has some early photos on his site, where you can find before-and-after photos of Messier 95.

And if you need more right now, Deep Sky Videos has put together a wonderful presentation — released just yesterday — on this supernova so far.

So if you can find Mars, and you have a good enough telescope and good enough skies, you can be among the first to see the latest supernova in our night sky!

Update: The supernova has been confirmed! It's a Type IIp supernova, and its name is SN 2012aw! It will brighten, and continue to be visible probably into June, when Mars will have (finally) moved a considerable distance away. Keep watching!

They say you know you're a deep sky buff when you consider Mars to be light pollution. ;-) Awesome! I hope it eventually brightens enough for my meager 130mm 'scope, though I'll need to go into the country to get dark enough skies.

Is it possible to get/import data into Stellarium for the screen shot you used. I don't know stellarium very well. I just set it up for my coords, and line the screen view up with my windows compass bearing, and watch real time sometimes. I see there is a script window that perhaps could be used...? Great blog.

There is a "Historical Supernovae" plugin for Stellarium that you can use.

Information (and instructions) are available here, on the Stellarium wiki.

Oh, and there's a stellarium wiki with a whole assortment of extra features and plugins to make your head spin. :-)

Dr. Doom here likes to dream how some types of supernovae are caused by a humanoid high energy particle experiment on a nearby blue planet that triggers a catalytic event, combusting all matter on that planet, and by doing so blowing up the local sun, like a balloon that's beeing 'popped' with a needle, as in this picture:
http://tinyurl.com/supernova-exposion

Shoe's on the other foot now, Marvin the Martian! Mars is blocking our view of the supernova! Now where'd I put that Illudium Q-36 Explosive Space Modulator....

Another SN hypothetically viewable by me! Woo!

But between Mars, light pollution from the nearby city, and the clouds that don't seem to want to go away (not complaining, they've brought much-needed rain) I'm not going to get my hopes up too high.

Thanks for the tip Ethan, I'll be on the look out for it!