I last commented about Antarctica and SLR when I "reviewed" the AR5 cryosphere chapter. As I noted there, things have come on quite a way since I were a lad (2005, 2004) and the major advance looks to be GRACE, even if they sometimes recalibrate their isostatic rebound; see-also this from 2009. And now, via Sou, I find Mass gains of the Antarctic ice sheet exceed losses by Zwally et al. Which says

This contradicts the aforementioned AR5, which says

And you can if you wish see what that is based on:

And you can't really fix the discrepancy by quibbling about the exact time period used, either. Again from AR5: 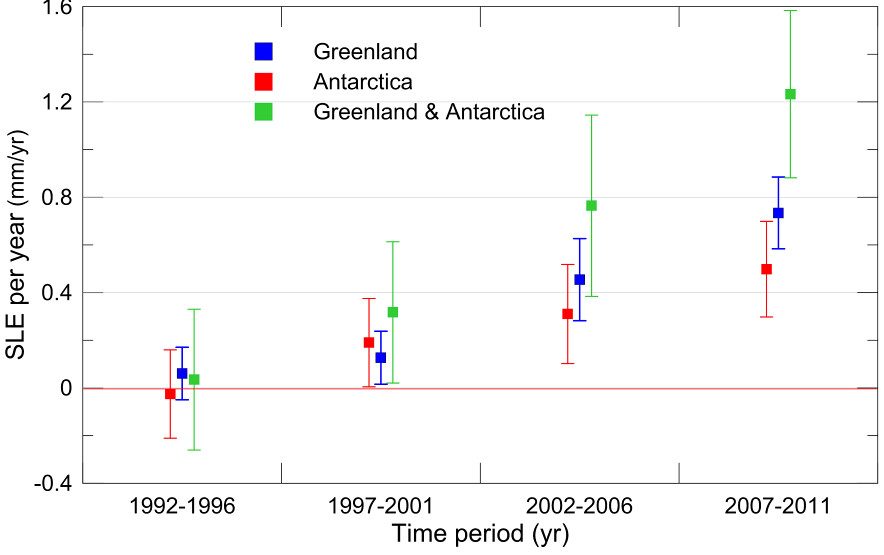 Or see-also figure 4.16. So, how do Zwally et al. resolve the discrepancy, which is almost entirely over East Antartica? Because it really is up to them to do the resolution. Not entirely convincingly I'd say:

A likely cause for the lower GR estimate is the sensitivity of the GR estimates to the glacial isostatic adjustment (GIA) correction, as discussed in the Appendix where we note that a –1.6 mm a–1 change in the modeled dB/dt would bring the GR and our dM/dt into agreement...

However, in at least one sense, none of this matters. What we care about above all else is the change in the mass budget of Antarctica, because that feeds into changes in the rate of SLR. After all, we already know the current rate of sea level rise. If Z is right about East Antarctic and that is actually gaining mass, all it means is that somewhere else is losing more mass than we thought. East Antarctic is probably least interesting for changes in mass balance because, whilst huge (~50 m of SLR in total, as against ~5 for West Antarctica of Greenland; those numbers are all for total melt, which won't happen soon for any of them) its very slow; Greenland, the Antarctic Peninsula or West Antarctica are more interesting for change.

Note: the comments chez Sou are worth reading; in particular the note about Cryosat, and the link to Gavin's perceptive and meticulous analysis of the relative merits of Zwally vs GRACE, which pretty well amounts to my meh, I'd trust GRACE more. Though I'm sure he could expand on that at greater length if given the chance. Oh, if only he had his own blog :-).

I read elsewhere today that
"In a paper published in the Journal of Glaciology on Friday,
researchers from NASA's Goddard Space Flight Center, the University of Maryland in College Park, and the engineering firm Sigma Space Corporation offer a new analysis of satellite data that show a net gain of 112 billion tons of ice a year from 1992 to 2001 in the Antarctic ice sheet.
That gain slowed to 82 billion tons of ice per year between 2003 and 2008."

The issue is not the having of a blog, but of finding the time to write things done coherently and interestingly. But I'm sure you are correct - I could make a better case if I tried ;-)

Thanks William, nice summary of AR5 and the included figure. Agree on the meh GRACE dataset, single platform, mass versus volume-to-mass conversion.

From your link above ...

"But one problem with measuring the gains to the continent, Bell said, is understanding the process of snow becoming ice on the surface."

That's what 1st came to my mind, that the surface depth density differences might play a role based on accumulation rates (or lack thereof). The whole loose falling & blowing snow to firn to ice relationship.

Haven't read the paper so don't know if that was directly addressed on not.

[There's a whole pile of difficulties involved in doing the calculation the way Z tries to. That's certainly one part of it; estimating outflow rates is another. By contrast, GRACE "only" has to worry about isostatic rebound, and I'm fairly sure GPS helps tie that down -W]

"If Z is right about East Antarctic and that is actually gaining mass, all it means is that somewhere else is losing more mass than we thought"

So, do we only think that somewhere and somewhere else is gaining/ losing weight or do we actually try to measure it?

[We know SLR. Sorry, I thought that was obvious -W]

If you agree that we are actually trying to measure it,
and then hope to communicate these results
You cannot use "all it means....than we thought".
Thinking that Antarctica has more or less ice is not science, it is purely a belief.
"If Z is right about East Antarctic and that is actually gaining mass"
this comment opens lots of doors. One that you do not want to open is the possibility that Zwally is right and GRACE wrong.
Saying
"FWIW, I’d trust GRACE more than anything else; it just feels intrinsically more reliable".
to me just emphasizes that you are wanting something to be right because you believe it must be right.
Very admirable but not very scientific.
Just the sort of things you accuse skeptics of doing when they want their beliefs to be true.

There is a very good write up at RealClimate by Jonathan Bamber.

Bottom line appears to be they don't really know what is going on in EAIS at this time, but are very confident of the mass losses for WAIS and GRIS.

Also, everything wrt ice sheet mass changes must be consistent with their current understanding of the sea level budget.

Finally, GRACE would appear to be the better platform for mass changes sans their still rather poor understanding of GIA for the interior of EAIS (which affects all measurement systems).

[You're behind the times :-). I added it to the top of the post. But it doesn't hurt to have it down here, too. Its a useful post, and adds more detail. It still misses some (not crucial to the main point) that I might write about. But the essential uncertainty over the snow height is important. In the end I think it amounts to the same "meh, I prefer GRACE" that Gavin and I (and indeed the AR5) already said. What this means, I think, is that Zwally's paper isn't actually about the mass balance, its about how the technique he uses "works" and gets the wrong answer -W]