The Most Impossible Technology From Star Trek (Synopsis)

“‘Star Trek’ says that it has not all happened, it has not all been discovered, that tomorrow can be as challenging and adventurous as any time man has ever lived.” –Gene Roddenberry

Today marks the 50th anniversary of the premiere of Star Trek, our first science fiction adventure that promised a positive view of the future, ushered in by technology and humanity's best traits. In addition to a utopia where maladies like hunger, disease and poverty were eradicated, Star Trek promised a future where technology was widely available and sufficiently advanced to the benefit of all of humanity.

The transporting of John Harrison in Star Trek Into Darkness. Image credit: KANE2026 of scifiempire.net, lifted from the freely available movie trailer.

While many of these imagined advances in technology have been met or even exceeded already, such as in the field of medical diagnostics and communication, others like warp drive and the Star Trek transporter may never come to fruition. No matter how much your technology advances, you still can’t circumvent the laws of nature. 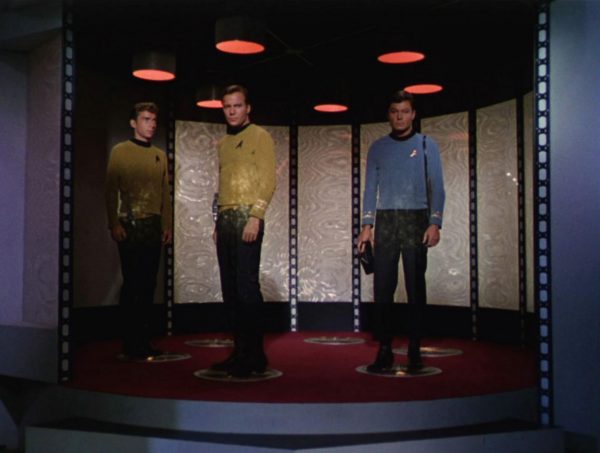 Here are the limits of what the transporter actually are, and why it takes the cake as Star Trek's most impossible technology!

Michio Kaku's "Physics Of The Impossible" covers the transporter and some other familiar themes, and is a great read overall. BTW I believe he said that the transporter was a device of production convenience because of limited budget.

The "Laws" of nature were written by humans over a very short span of time. We know so little about the universe and there is no telling what great discoveries are waiting for us in the future.

...you could have every human that’s ever lived wait the entire age of the Universe and never have a single one move as much as a micron.

I was in a line like that last night.

One question about something not mentioned in the article - the personal weapons. I realize they aren't feasible, but a discussion about them at some time would be interesting.

I was in a line like that last night.

You do know that you could have just watched Donald Trump on TV, right? You didn't need to stand in line to see him in person.

It was not the Trump line - none of the people ahead of me were dragging their knuckles on the ground.

Now we can print a human somewhere.

Next, we need to measure the important pieces of the teleporter subject. Brain connections, muscle mass, hormone levels.

Modify the base "human model" to match the measurements and remotely print someone who looks like and has the same memories as the teleporter subject.

Lastly (or maybe as part of the "measurement phase"), destroy the original.

Oh, I forgot to add a very important component. Suppress the truth and advertise that you get your atoms beamed down to the planet.

If the original's destruction was intensely painful and the copy didn't have that memory, did it really hurt to be disintegrated?

Dr. McCoy was very smart, and not as coldly logical as Spock. That's probably why he hated the teleporter.

To even dream of doing that would require not only putting all the particles that make you up back together in the same configuration, but with the same positions and momenta that they had before you were teleported.

This is only a limitation if the transcription is completely dumb. If we had the ability to scan matter to the degree required, the machine would have a good idea on how to construct a living human. It wouldn't need the position and speed of every particle, only information enough to build a 'you' complete with your neuron configuration and you'd never know the difference. Even if it were possible to know the speed and position of every particle, you'd do it the quick and dirty way anyway just to save on bandwidth. If there are any compression artifacts in the new you, they'd just appear as the constructed you being more healthy than the scanned you as the machine filled in the blanks with idealized anatomy.

For impossible Star Trek tech, I'm going with time travel to the past.

Oh, I forgot to add a very important component. Suppress the truth and advertise that you get your atoms beamed down to the planet.

If the original’s destruction was intensely painful and the copy didn’t have that memory, did it really hurt to be disintegrated?

A topic explored in the 1995 short story Think Like a Dinosaur (and the Outer Limits episode of the same name). Read the story, don't bother with the TV episode. While it follows the story reasonably well, it doesn't do the author's pacing and style justice.

To even dream of doing that would require not only putting all the particles that make you up back together in the same configuration, but with the same positions and momenta that they had before you were teleported

Like Denier and Carl, I don't think this level of accuracy or precision is really needed. Your body is constantly shedding and replacing cells, on the order of pounds of them per day. So if you're naturally changing out whole mols of atoms on a daily basis, why should I care if a transport to Mars changes out as many cells as I do when I visit the rest room or eat a burger?

Obviously not all cells are created equal; we'd probably want the highest accuracy and precision for the brain. But I don't think that any practical beaming technology necessarily needs to cater to the human psychological misconception of cellular continuity.

With C as the limiter, what would the maximum distance be for a transport event? How many bodies could be transported during the same cycle without mixing up the atoms? Hmmmm.
:)

"We know so little about the universe "

How do you know?

And how do you know that whatever it is we don't know will change the possibilities of matter transporting???

Here are some big problems with the transporter.

1) What happens to the rest mass energy of the body disintegrated? To transfer that energy that quickly to some "battery" would be a huge problem.

2) If we're using that energy in a beam which is reconstituted, what happens to something getting in the way of this massive energy beam?

3) Where are we getting the energy to re-create someone if we're NOT reconstituting someone from the original energy?

Even if it were possible to do, it would be extremely pointless. Much much less energy would be used up just landing via ordinary craft.