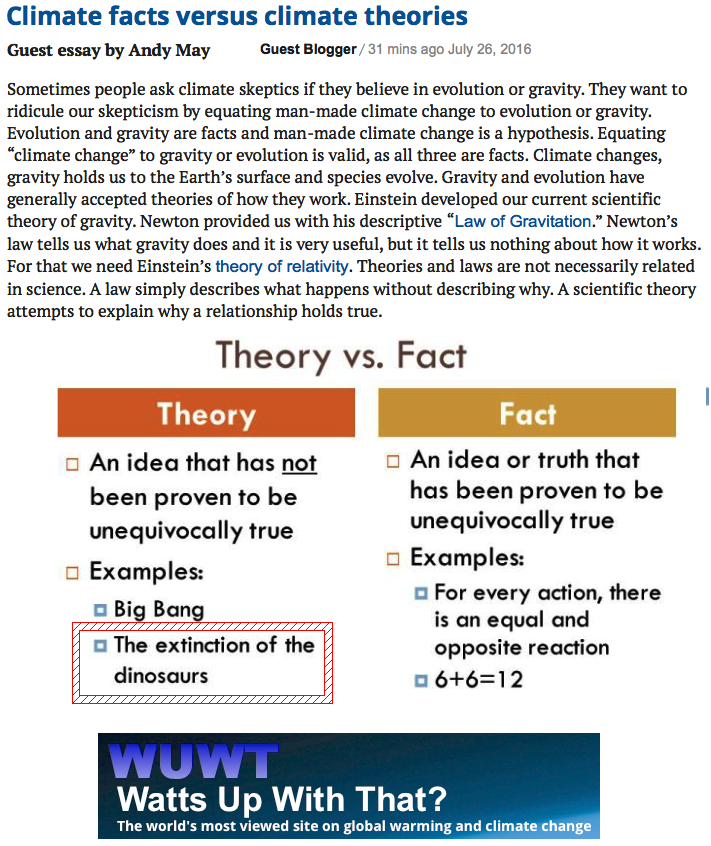 About the most useless game to play in discussions about global warming is to worry much about the distinctions between "proven facts", "theories", "hypotheses" and so on and so forth. These are ideas best left to philosophers and schoolmen. My image comes from the ever-helpful RS which is my excuse for having noticed a WUWT post. RS has picked out one obvious problem - which, oddly enough, the WUWT commentators notice too. A further one comes up when our hero attempts to probe these concepts further:

In the scientific community, for both a law and a theory, a single conflicting experiment or observation invalidates them. Einstein once said:

"No amount of experimentation can ever prove me right; a single experiment can prove me wrong."

So, let’s examine our topics in that light. Newton’s descriptive law of gravity, based on mass and distance, are there any exceptions? Not to my knowledge, except possibly on galactic sized scales, black holes and probably on very, very small sub-atomic scales. In everyday life, Newton’s law works fine. How about Einstein’s theory of gravity (Relativity), any exceptions? None that I know of at any scale.

That rather forgets the "anomalous" precession of the perihelion of Mercury, as well as some more esoteric effects. But it also blows a hole in the idea that a single conflicting experiment invalidates a theory. That just isn't how science works. I find I wrote about science before but didn't cover this point, perhaps because it was too obvious. So, the unexplained precession of Mercury didn't suddenly cause everyone to lose all faith in Newtonian gravitation. For any number of reasons. It still worked, obvs, in all the places it had worked before. And, well, maybe the observation was wrong? Who knows, whenever this kind of thing happens people will make lots of suggestions as to how to rescue it: perhaps there was a dust belt between Mercury and the sun?

Theoretical holism and the underdetermination of theory choice by empirical evidence are the central theses in Duhem's philosophy of science. His argument, in brief, is that at least in sciences like physics, where experiment is dense with sophisticated instrumentation whose employment itself requires theoretical interpretation, hypotheses are not tested in isolation but only as part of whole bodies of theory. It follows that when there is a conflict between theory and evidence, the fit can be restored in a multiplicity of different ways. No statement is immune to revision because of a presumed status as a definition or thanks to some other a priori warrant, and most any statement can be retained on pain of suitable adjustments elsewhere in the total body of theory. Hence, theory choice is underdetermined by evidence.

* For the record… by Jon Butterworth on Monckton's "golden dawn of truth" drivel.

Why would you define 12 as 6+6. One more than 11 seems a more obvious definition.

Successor of 11 is more natural, if you'll permit an interjection from the Peano gallery :-)

"More natural" was a pun...I guess it's the way I tell them.

In the case of Mercury's perihelion, one possibility was that a previously undiscovered planet, usually called Vulcan, was orbiting inside of Mercury, and the gravitational perturbations were causing the precession of the perihelion. Neptune was discovered by exactly that technique: the orbit of Uranus had some unexplained features, which Leverrier in France and (independently) Adams in England calculated that they were explainable by an additional planet of a certain size in a certain orbit. Leverrier gets the credit because he was in contact with a telescope operator who pointed it at the part of the sky Leverrier specified, and found Neptune in the expected place.

As for 6 + 6 = 12, that depends on the assumption that we are using a base 10 representation. That usually holds for everyday life. But in certain applications, namely computers and other digital electronics, it is often more convenient to use base 8 (in which 6 + 6 = 14) or base 16 (in which 6 + 6 = C). Douglas Adams got something accidentally right this way: the Answer to the Ultimate Question of Life, the Universe, and Everything is 42, and the closest anybody got to the question is, "What do you get when you multiply six times nine?" That happens to be correct in base 13, which Adams was not aware of when he was writing those books.

"if you’ll permit an interjection from the Peano gallery" was rather good though - best academic joke of the day so far :-)

“No amount of experimentation can ever prove me right; a single experiment can prove me wrong.”"

I don't think Einstein said that. It is an out of context paraphrase of something else he said that was correct.

[It looks like you've found yet another problem :-). I can't find anyone definitely saying its fake, but https://en.wikiquote.org/wiki/Talk:Albert_Einstein has a discussion of it being probably a paraphrase, as you say. Interesting; I've got so used to seeing that I didn't even think; perhaps a mistake -W]

The non-negative integers are descriptors of equivalence classes of equinumerous finite sets. Two sets are equinumerous just in case there is a bijection, i.e, a one to one correspondence between the members of the two sets.

As this requires only naive set theory it is but first order and therefore certain; factual.

It is likewise certainly factual that the first and last lines of 'Good King Weceslaus" and Wittgenstein's Tractatus can be sung to the same music . Does this make them rigid designators in the same set?

The existence proof consisted in caroling W.V. Quine at his Beacon Hill home.

Neither side of the climate wars seems to like the Tractatus very much.

On a more serious note, GR was not successful because of it's postdiction of the anomality of Mercury's orbit, but of the prediction of the amount of starlight bending by the Sun.

...was succesful not...
To avoid misunderstanding.