How to Launch a Space Shuttle in 4 minutes!

"Anyone who sits on top of the largest hydrogen-oxygen fueled system in the world; knowing they're going to light the bottom--and doesn't get a little worried--does not fully understand the situation."
-John Young, after being asked if he was worried about making the first Space Shuttle flight (STS-1).

It may be hard to believe, but the United States has been flying Space Shuttles since 1981: for 29 years. But what does it take to get a shuttle ready for launch? 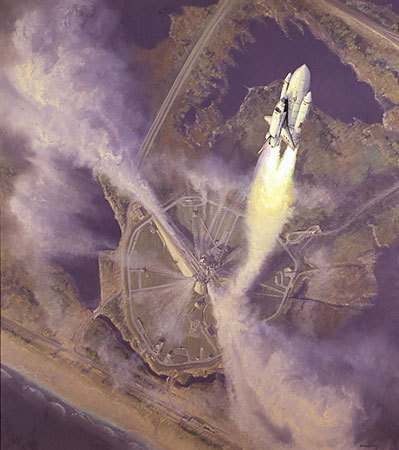 In real life, the Space Shuttles come down from a mission and get towed around the campus at Kennedy Space Center. Where do you take one first? Well, the shuttles-- when not in use -- normally live in a special building at the Kennedy Space Center called the Orbiter Processing Facility. (There are three: one for each shuttle.) 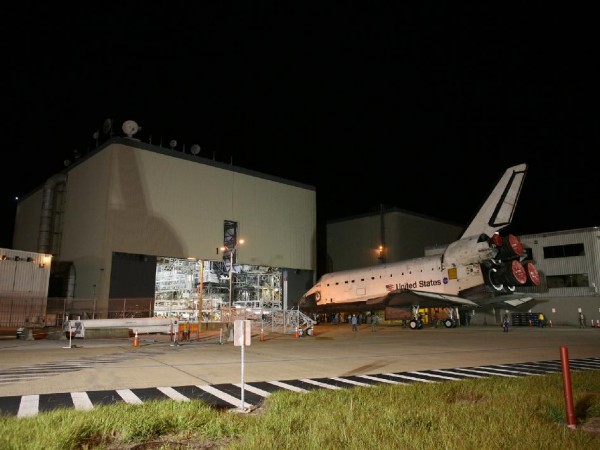 The shuttles are towed there immediately after landing, where they undergo a tremendous amount of maintenance. As mundane as the Orbiter Processing Facility looks from the outside, I was absolutely shocked when I found out what they look like on the inside. 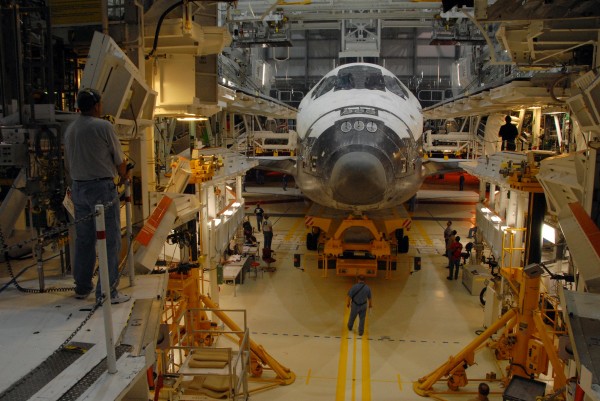 It's like having the largest airplane hangar in the world! First off comes the repair and maintenance work that goes into restoring the shuttle. Somehow, flying back into the atmosphere at around Mach 25 (around 16,000 miles-per-hour, or 25,000 kph) is hard on an aircraft. 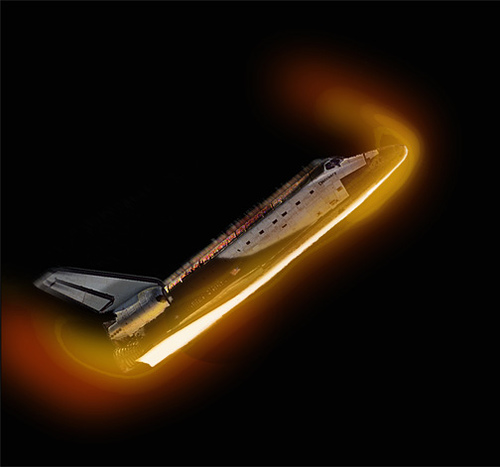 But even after that, the shuttle needs to be specially outfitted for its particular mission: a process that takes around six weeks and hundreds of workers.

But then, you've got to get the shuttle ready for launch, which means getting it upright, attaching the external fuel tank and the two solid rocket boosters. How to do that? Take it over to the Vehicle Assembly Building. 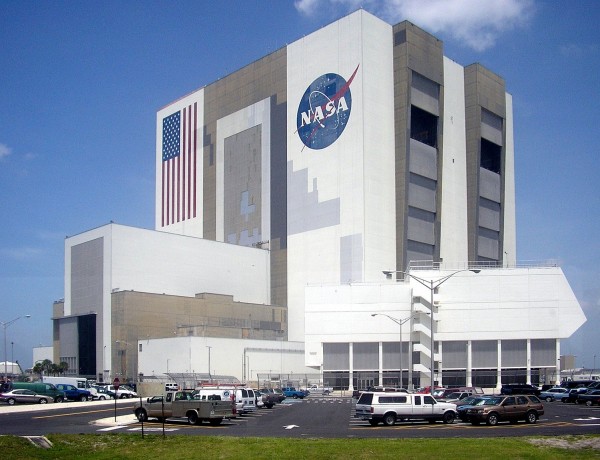 Once inside the VAB, the largest single-story building in the world, the shuttle is hoisted into a vertical position. 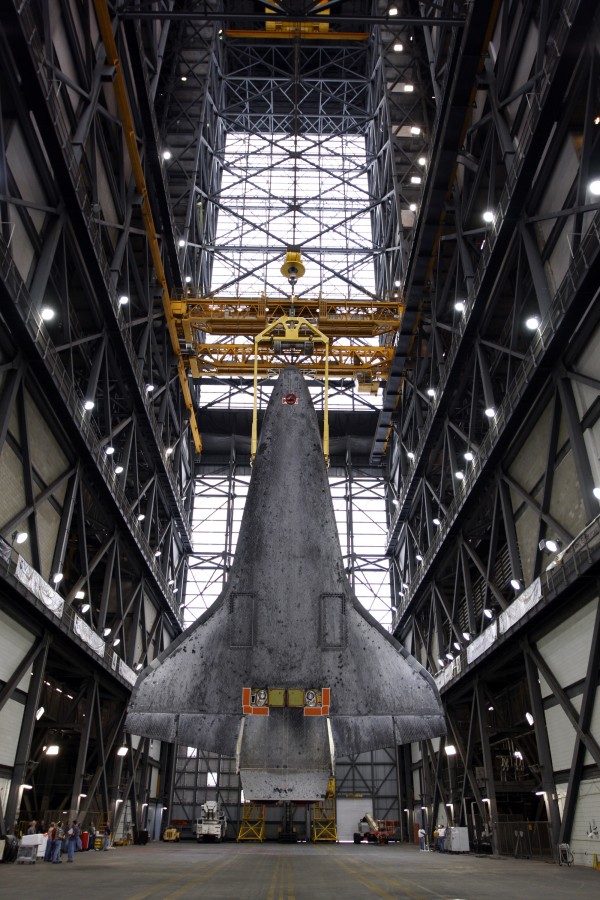 It's then lowered onto the external tank/solid rocket boosters, 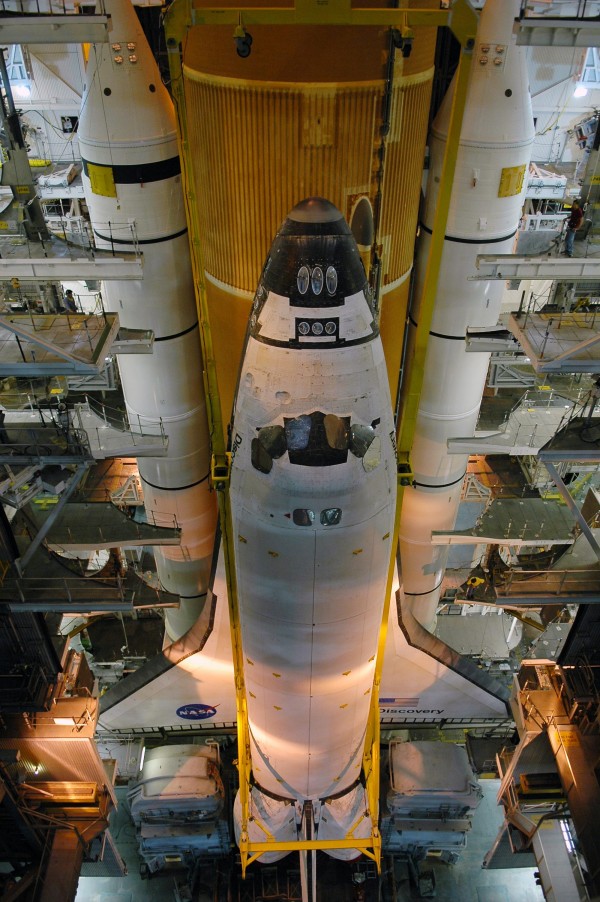 and placed onto the Mobile Launcher Platform. (Which is, in fact, mobile.) 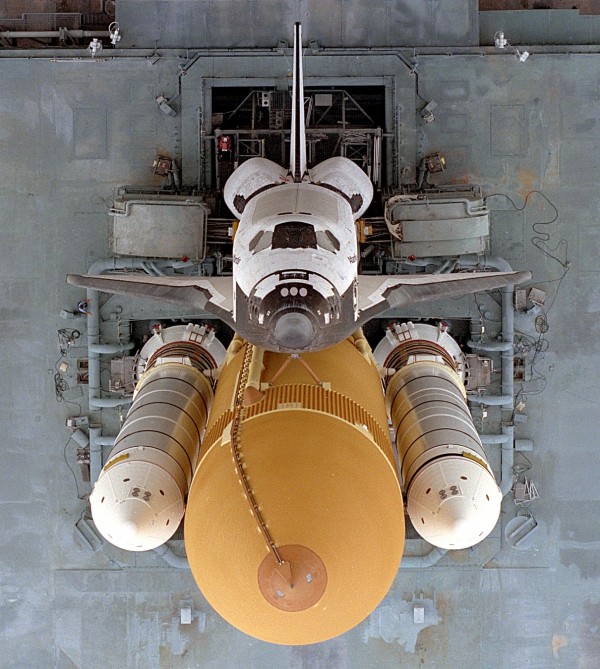 The Mobile Launcher Platform then heads off to the launch pad, where the Rotating Service Structure will protect it until it's ready for launch! 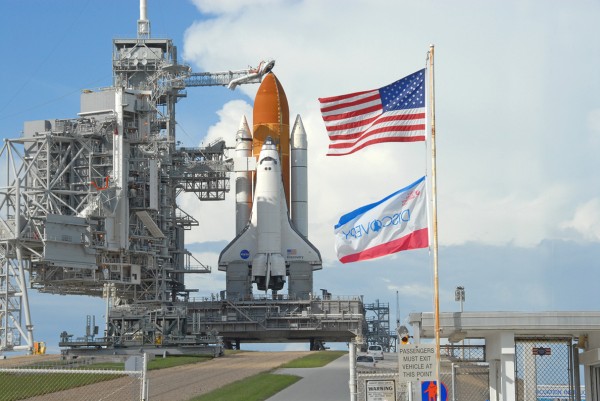 Finally, the Shuttle is left alone on the launch pad, and is ready for takeoff! 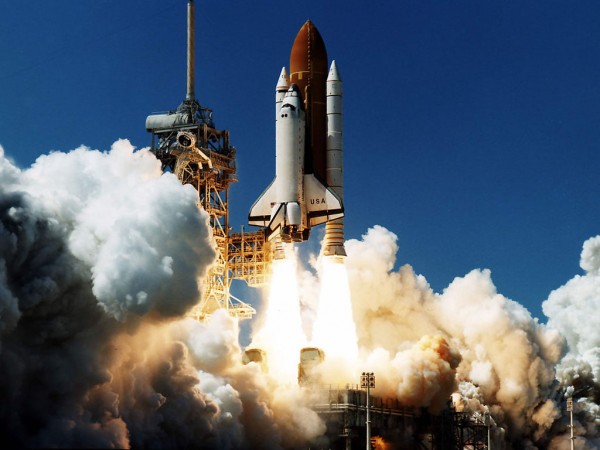 But why wait so long to see the whole process? Well, you don't have to anymore. Scott Andrews, Stan Jirman, and Philip Scott Andrews (Scott Andrews' son) took this arduous, six-week process and created a time-lapse video out of tens of thousands of still images to condense the whole process down to under four minutes. (Original source: the Smithsonian's website.) Have a look for yourself!

So as the shuttle winds down its nearly thirty years of service to humanity's enterprise in outer space, take a few minutes to appreciate just how spectacular this achievement really is. (And don't forget to take a look at how they made the video.)

And for those of you wondering, the images I've used are of a wide variety of shuttles, but the video shot is exclusively of the Space Shuttle Discovery on its mission earlier this year: STS-131, under the command of Alan Poindexter. Enjoy!

Very informative! I guess there are only a handful more occurrences of this until the shuttle's done.

There are three: one for each shuttle

The count, three, gave me a twinge of sadness there.

Atlantis and Discovery are the two major ones since the Columbia disaster, but don't forget about Endeavor: http://en.wikipedia.org/wiki/Space_Shuttle_Endeavour

Built as a replacement for Challenger, Endeavor has been flying since 1992, and is slated to fly the last shuttle mission ever: STS-134.

Well, the shuttles-- when not in use -- normally live in a special building at the Kennedy Space Center called the Orbiter Processing Facility. (There are three: one for each shuttle.)

Perhaps they're called Orbiter Processing Facilities, because it's the orbiters that are processed there. The shuttle is the entire stack assembly that gets lit up on the pad. The bit with the astronauts is only called the orbiter.

Not that I haven't thought differently, myself, but I gather that this is apparently as big deal™ to people in the know.

The STS is the Greyhound bus of space travel. They should have just built a giant cannon to shoot people into space.

Even with the shuttle's problems and they are a legion, she is still one beautiful girl. It will be sad to see her go. I hope we get back out there in a big way. Space may be our best hope.

That's pretty frickin' impressive. I especially enjoyed the swarm surrounding it even as it was driven from one building to another, and the massive crane hefting it around.

That said, I'm certainly looking forward to new modes of space travel that aren't so impressive. I imagine when they quote the cost to send material into space (it's a few thousand dollars a pound, right?) it takes this herculean maintenance effort and cost into account. When we have a vehicle they can turn around like a commercial airliner, space travel will be a lot less glamorous, but we'll all be able to do more than watch on tv. I think the trade-off will be worth it.

I recognize that three orbiters remain. My sadness was the realization that the physical complex must have had four such buildings in its past.

"Once inside the VAB, the largest single-story building in the world"

How does that building qualify as single-story?

Because inside is one big open area...kinda like a huge box. There are levels to get to the fuel tank, orbiter, and boosters known as "Access Platforms". It really has no floors or offices per se although there are some rooms here and there from the Apollo days which were used before NASA built office buildings around the launch complex.

And no, the terms Orbiter and Shuttle is one in the same. The completed stacked unit as you call it is termed "Space Transportation System" or better known STS-?? (mission number)

It takes about 8 hours for the crawler to take the Shuttle 3 miles from the VAB to the LC-39 launch pads. The path is lined with stone rock. And then the incline to the pad.