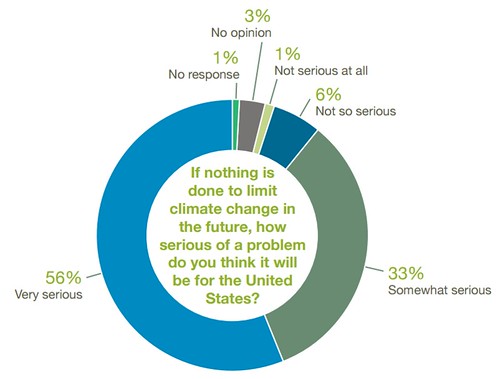 Tis David Roberts, at Vox. I say that up front because although I'm pretty sure I've disagreed with him on just this kind of stuff before, I can't find it now. Although maybe I was thinking of the related How much is climate change going to cost us? at Grist, which is presumably much the same thing. DR starts with:

It's fairly well-established at this point that there's a robust scientific consensus about the threat of climate change. But analysts and journalists often say (or imply) that there's less of an economic consensus, that economists are leery of the actions recommended by scientists because of their cost.

The bit about the scientific consensus isn't in doubt; but "economists are leery of the actions recommended by scientists because of their cost" reads oddly. As we all know, there is an economic consensus on a carbon tax, which I share. But what does "actions recommended by scientists" mean? If I go to Expert Consensus on the Economics of Climate Change which is what DR's article is based on I find the scientific community has developed widespread consensus that action to reduce greenhouse gas emissions is necessary, which I think is reasonable, as a representation of the views of scientists. However I think I'd argue that those views are subtly wrong, because they mis-state's scientists place in the process. (Climate) scientists get to investigate, determine that GW is happening and will proceed in such-and-such a way in the future under certain conditions (principally, emission scenarios). However they don't have any especially privileged position as regards "policy recommendations" as to what to do about it. Why should they? Their expertise is in the science, not in economics or in policy. They can - rightly - complain if politicians do nothing about GW. So I think economists are leery of the actions recommended by scientists is entirely likely, and likely to be both a correct reflection of economists views, and that the said views of the said economists are likely to be correct, too (the title also doesn't make sense, of itself. Should it read economic models underestimate economic impacts of climate change? That would make sense, as a question. But I won't waste time on titles).

At that point I realised the survey was from 2015 and I've already blogged about it. FFS.

Other than that there's a lot of confusion about "climate model" and failing to distinguish physical from economic, which I think is a poor show; and then there's the standard stuff about social cost of carbon and discount rates, but there's nothing new in that, of course.

In the end, as I said before, what's most interesting about the survey of economists is the degree to which they think Something Should Be Done. As the graph I've inlined at the top shows, a clear majority, 56%, plump for "very serious" as the answer to "If nothing is done to limit climate change in the future, how serious of a problem do you think it will be for the United States?" and 50% go for "Immediate and drastic action is necessary" as the answer to "Which of the following best describes your views about climate change?" So it is pretty odd the way everyone beats up on the Evil Economists; it is almost like people are fighting strawmen.

* Peak Oil Was Correct - It's Just It Was Peak Demand, Not Peak Supply

Trump had issued this threat to all climate change scientists long ago and still nothing but silence from them;

What ever happened to the American Physical Society statement on Global Warming?

mememine has been peddking these fake Trump quotes for months. Problem is most liberals have functioning BS detectors. As was pointed out in a recent article on 'Fake News' and the recent US elections, the fake news people couldn't get their strategies to work on liberals - they were always debunked within a couple comments.

[That one wasn't terribly convincing, I agree. But I've seen plenty of the nice liberals from my fb feed falling for and promoting fake news - the one about the Trump tower in Argentina most recently -W]

This is nonsense. Trying to mitigate climate change is not economically rational, and anyone claiming otherwise clearly does not understand the concept of the discount rate.

[I fear you have failed to make you point clearly -W]

WC writes: "...I’ve seen plenty of the nice liberals from my fb feed falling for and promoting fake news – the one about the Trump tower in Argentina most recently"

I haven't seen the 'fake news' stories on Trump and Argentina. I have seen news stories - for instance Vox - The controversy over Trump's tower project in Argentina: what we know

What are the fake news articles saying?

I actually don't know of any fake news sites built for liberals. Not saying they aren't out there, but I haven't run across one -- unless you count "The Onion"

So the DailyKos made a (perhaps) mistake, and at least partly admitted it?

There have been several denials of this story by Argentinian officials, and one of the reporters behind the piece now calls it “half joking,” though it’s completely unclear what he meant.

The story originally ran on a program called Periodismo para todos (Journalism for Everyone) which mixes skits with serious reporting—something approximating an Argentinian version of This Week Tonight. but with more serious investigative journalism similar to the early days of 60 Minutes. The Trump story was apparently in the opening monologue of that show, and may have been, at least partly, in jest.

So consider this at least a half-retraction until we can determine what half-joking means."

That's not an example of fake news. Try again.

[Au contraire, it most certainly is an example of fake news; just not one on the side you'd like it to be coming from. The Kos repeated unverified - and, intrinsically unverifiable - accusations. And in no uncertain terms: "extort" was n the headline and "It’s a textbook instance of extortion being carried out, not in secret, but blatantly" was in the text. And they didn't even have the honesty to properly retract it.

But you're missing the point about fake news: it is that people repeat it, and focus on the headlines. Here's what it looks like in my fb feed:

Notice the original poster's refusal to re-consider, based on the simple assertion that Kos is reputable -W]

Umm - that's not fake news. And the story didn't come from a fake news site.

See NPR -- We Tracked Down A Fake-News Creator In The Suburbs. Here's What We Learned

What you've pointed to is an interpretation of real news. I'm talking about *fake news* -- stuff that's wholly made up. Remember that the original story was from Lanata's TV show -- Periodismo para todos -- and in Spanish. In the original Lanata does say Trump and Macri spoke about the development - though he appears to have backtracked some. Of course unless one of the parties admits to some quid pro quo all one can point to is a coincidence of timing, but isn't that always the case?.

Ironically, the Huffington Post currently has as their lead story THE NEXT PRESIDENT JUST TOLD ONE OF HIS WORST LIES YET. Trump claims he won the popular vote as well as the electoral college apparently based on a tweet that claims 3 million illegal votes cast.

This number appears to be completely made up. I.e., fake news. And it's being quoted by the President-elect. There really is nothing comparable on the liberal side.

The Gay Girl in Damascus blog was a good example of 'liberal' gullibility. Its output ticked all the right boxes - a gay, a girl, a foreigner who thinks exactly like we do - so it had to be true. Or, as 'Jestin Coler' said of his alt-right fakes:

"The people wanted to hear this so all it took was to write that story. Everything about it was fictional: the town, the people, the sheikh, the CIA guy."

(Who was MacMaster himself according to some of those who later tried to explain their gullibility.)

Less extreme examples can be seen in the Grauniad most weeks.

So there is nothing unique about Trump supporters choosing to believe crap they read online.

A Gay Girl In Damascus? Seriously, Vinny? You consider that the equivalent ?

Daily Kos is unreliable insofar as the tweezers, microscope, and time spent required to pull the truth out of it, but it is not what people are referring to about the fake news sites.

Paul Merrifield (Meme Mine69) has been peddling anti-climate science nonsense in an astonishing number of comment sections for years.

Paul Merrifield (Meme Mine69) has been peddling anti-climate science nonsense in an astonishing number of comment sections for years.

You mean MemeMine69 is a real person? I became convinced early on it was a 'bot! Good name for one, you know. A lot of MemeMine69's comments seem as if they 're triggered by some kind of scanning algorithm, too.

More on fake news. Of particular note is the graph comparing Facebook 'engagement' for MM and fake news sites through the campaign cycle. Sad.

The problem is that companies do not want to incur costs for the sustainability of the system. They have high costs and would like to download them all on the community

Watch for a market and climate twitch/flinch when there's a total eclipse crossing the whole USA this coming August?