"We are asking the nations of Europe between whom rivers of blood have flowed to forget the feuds of a thousand years." -Winston Churchill

One of the great arenas in the world that knows no international bounds are the performing arts in general, and music in particular. Some of my favorite musical innovations have come from not only foreign countries, but from mixing many different musical cultures together. This weekend, have a listen to this amazing collaboration between James Keelaghan and Oscar Lopez, whose work combines Irish, Flamenco, and Canadian influences together to create this rendition of a classic folk song,

A little over a week ago, I heard about the Eurovision Song Contest for the first time, where dozens of countries across Europe, Northern Africa and East Asia send an act to compete for the top act in the world for that year. Every year since 1956, this contest has occurred, and has launched the careers of a number of successful international acts, including Julio Iglesias, ABBA, and perhaps most famously, Celine Dion.

That said, when I first heard about it, I had no idea what to expect, other than I knew Bonnie Tyler (of Total Eclipse of the Heart fame) was competing for the UK. Little did I know what I was in for. 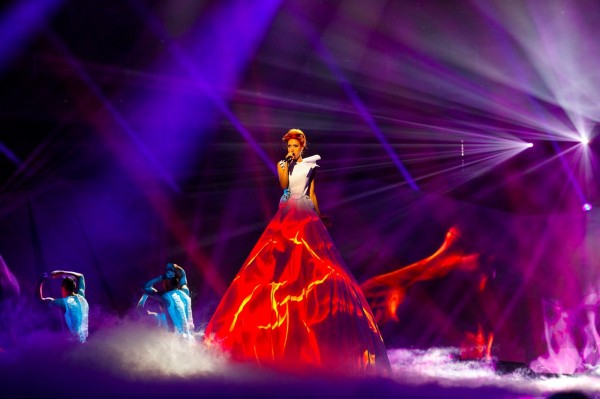 Imagine the best campy aspects of every semi-professional singing/dancing/costuming talent show that's ever been created, and now imagine that you combine you combine that with pyrotechnics, a stage show, and, in Montenegro's case, an imaginary futuristic space program. 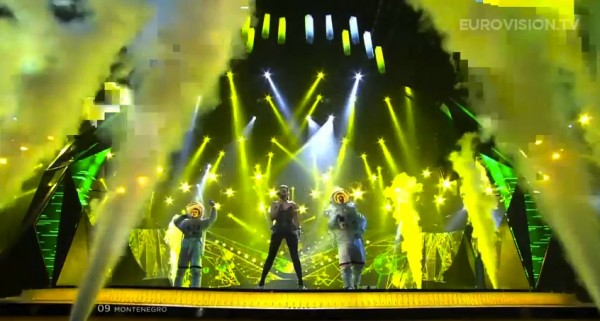 First off, you can always watch the whole thing (no matter where you are) from Eurovision.tv's website, although if you do, you'll miss the hilarious Graham Norton commentary, which turns the whole experience into an MST3K-style laugh-fest, if MST3K were hosted by an Irish Neil Patrick Harris.

That said, this happened last weekend, and I feel deep regret for only finding out about Eurovision now, because I really think my life was incomplete before this. I knew to expect an international singing competition, but I envisioned more traditional music/songs from all the different competing countries, showcasing the different styles and languages of Europe. But that is not what Eurovision is all about. In fact, a week later, I think I'm still taking it all in. Without further ado, here are the top 5 most memorable performances/spectacles for me from Eurovision 2013!

5.) Denmark's entry: Only Teardrops by Emmilie de Forest. Featuring a prominent flute, a couple of parading drummers, and a barefoot singer surrounded by raining fire, this was the winning entry in Eurovision 2013. It's a pretty good representation of a high-quality pop song, sung in English (like most entries), replete with pyrotechnics and a fun stage show. It was also innocuous enough to win, offending no one's sensibilities.

But where's the fun in that? Although it may have been the best performance at Eurovision by some standards, it certainly wasn't the most memorable.

4.) Romania's Entry: It's My Life by Cezar. Trust me, if you haven't yet seen this, this song does not go where you would expect it to. Looking at this hybrid vampire/member-of-the-Stark-clan on stage, resembling a certain Marvel supervillian, you might expect something a bit on the dark side. You might not be prepared for the bloodworm base, the countertenor vocals, and the giant elevated platform stunt, but even hearing the description, you need to see it for yourself.

And the poor United Kingdom had to follow this act in the finals.

3.) Ukraine's Entry: Gravity by Zlata Ognevich. First off, every Eurovision performance should begin with a giant-dressed-as-a-Viking-warrior carrying out your lead singer, who clearly needed it because there was no way she was at all mobile in that mermaid-esque dress. I had to look it up, and it turns out the giant is Igor Vovkovinskiy, a Ukranian-born law student who stands over 7'8" (2.34 m), presently living in the United States. This song wound up finishing third overall, the fourth podium finish for Ukraine since they first began competing in Eurovision in 2003. 2.) Azerbaijan's Entry: Hold Me by Farid Mammadov. As best as I can tell, mimes and magicians everywhere are kicking themselves that they didn't think of a stunt like this first. The stage show here perhaps outshone the song, but this was both a memorable and incredibly entertaining performance, and enough countries/people liked it that it finished in 2nd place. Azerbaijan has had a tremendous 6-year run at Eurovision, and even won the whole contest two years ago. I'm looking forward to seeing what they come out with next year, for sure!

But my favorite entry in the entire contest finished only sixth, although that was the highest finish of any country who sang in a language other than English.

1.) Greece's Entry: Alcohol Is Free by Koza Mostra featuring Agathonas Iakovidis. What, you think I liked it just because it featured a bunch of facial-haired, dark-skinned men wearing kilts? Featuring instruments that are rarely combined (such as the trumpet, accordion, and the traditional Greek baglamadaki), a catchy rhythm, an English chorus, and a just plain great-to-listen-to song, I think this is the entry that should have won. I also think it's great that it didn't actually win, because how would Greece afford to host Eurovision 2014?!

Seriously, this was an amazing spectacle, and I'm so glad I discovered it. Hope those of you who've never heard of or seen Eurovision before enjoyed these songs as much as I did! Just for the record, Eurovision also featured the Belarusian performer being born out of a disco-ball egg, 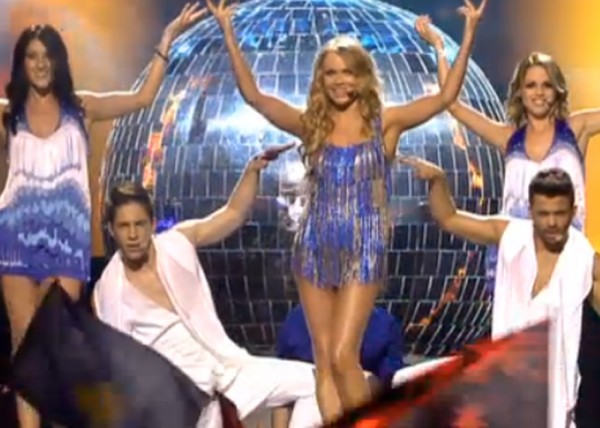 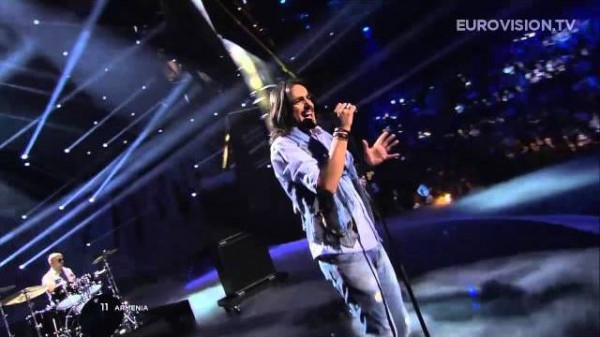 and Eythor Ingi living up to the Icelandic stereotype of looking exactly like a certain Norse God. 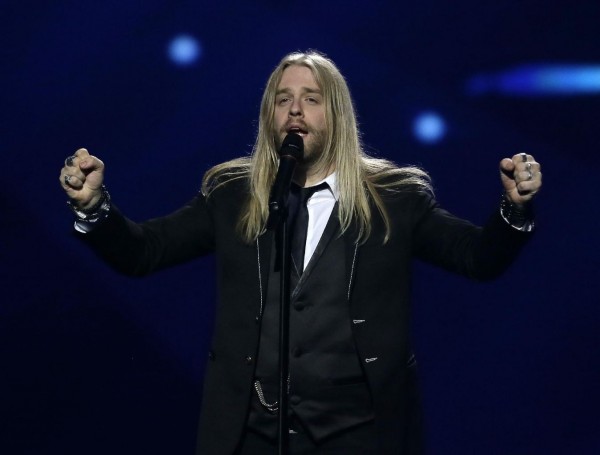 All in all, it was an unforgettable experience, and I think it'll be a long time before I get ALCOHOL, ALCOHOL, ALCOHOL IS FREE!!! out of my head. (Also, do any of my μαλάκας out there know what it means when you make that thumb-grooming gesture against your mustache? It features prominently in the official video for that song. I imagine it's at least as offensive as μαλάκας is, and I'm dying to know!) For what it's worth, Sweden -- by virtue of winning last year -- hosted this year's Eurovision, and poked great fun at themselves, having a comedienne host the show and featuring numerous references to Swedish stereotypes ranging from the Swedish Chef to IKEA.

Hope you enjoyed my redux of unforgettable moments, and may we all have Eurovision parties to enjoy this spectacle worldwide from now on!

Well a μαλάκας out here has to say: young men and boys beware of that mustache grooming old mangas (μάγκας) guy. The gesture could mean a number of things. a) don't fuck with me, b) I'm dominant, look at my mustache credentials, c) fuck with me, literally

Hi. This isn't quite my cup of tea, although the event was hosted in my home town. From what I heard, the Greek contribution was chosen to guarantee they would not win, since they couldn't afford to host the event. They were a bit nervous when they started getting votes.

The national competitions to determine what song goes to the Eurovision Song Contest is just as big, at least here in Sweden, and lasts all spring. We sports jocks are sure glad it's over so we can reclaim the remote.

Gosh, the Eurovision Songfestival.
Yeah, nothing more camp than that, not even an army of drag queens.

Of course, the songfestival wasn't like that in the beginning.
I'm reading the wikipedia article 'rules of the Eurovision songfestival' now.

Rules about singing in the native language have gone back and forth. The last change, by the looks of it, was in 1999, allowing free choice of the language to sing in (which in effect meant from then on all entries were in english.)

During the first decades of the songfestival (say, when television was still black and white) it was actually a *song* contest.

By the way, the dutch contestent for this edition of the songfestival is a singer called 'Anouk'. Most of her work is raw an energetic, but occasionally she writes a ballad.

When the news broke that Anouk was thinking about competing in the songfestival all her friends tried to talk her out of it, saying, "You're a *real* singer, you're a rockbitch, there's nothing for you in the Eurovision festival."

What abut the "scandal" (no one is taking it seriously except this site) about the Icelandic Norse god guy singing "I Am Cow"?
http://grapevine.is/News/ReadArticle/Official-Response-to-Eg-A-Lif-I-Am…

You really missed something. The European song contest is Europe's guilty pleasure and we share that pleasure across cultures, languages and social barriers. I'm pretty sure the contest has done more in terms of forging cross-cultural understanding than many political programs.

Everyone agrees that the song contest is cheesy but that's the fun in it! Just don't take it too seriously, get together with like-minded friends and discuss each contribution fervently - preferably with alcohol :-)

Damn!! Ethan if you had enjoyed this year's show you should watch some of the best moments of the last few years. There are some truly epic performances like the winning Hard Rock Hallelujah by Lordi in 2006 or from my own country, Spain, the unclassifiable El Chiki Chicki in 2008. He was in the mouth of everyone for months here :). Pretty much in the same line was the Austrian song in 2003 by Alf Poier. There have ben some really nice songs though in my opinion like the ballad Bailar Pegados from Sergio Dalma in 1991. Over 20 years later it's still a anthem here.
Eurovision is a never-ending source of joy :).

Sometimes the most interesting things happen during the national contest. There was a real possibility that a band called Winny Puhh would represent Estonia in Malmö. Here's the video of their song and stunts:
http://youtu.be/2dllo85ZSUk