A conversation with Andy Dixon: What the prison yard & twitter have in common: #140conf (video)

clock | April 26, 2010
I first saw Hashtag Art (on Twitter) at #140conf last week. These guys start with a picture, as a canvass. Then, as people tweet using a particular hashtag, their avatars become pieces of the mosaic, gradually building the image as event is happening. It took about two days, the duration of the meeting, to fill the entire image up. The image, as it was slowly developing, was occasionally projected on the screen behind the speakers. The Hashtag Art guys were also set up in the side room (where coffee and power-strips were), projecting the image onto a screen. When I approached them and they… 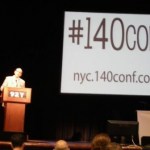 clock | April 24, 2010
As you probably know, The Bride of Coturnix and I went to NYC last week to attend the 140conference organized by Jeff Pulver who I finally had a pleasure to meet in person. The speaker line-up and the program schedule had to be slightly modified as a few people got stuck in Europe under the volcanic ash and could not come in time. But there were plenty of smart people in attendance who could readily jump in and join the panels in their place. There were a total of about 1000 people the first day and only slightly fewer on the second day. There were only a handful people there who I've met…

Tech in Education at #140conf (videos)

clock | April 23, 2010
This week in NYC, at #140 conf, I was most impressed by the talks and panels about education, and the use of online technologies, Web, and particularly social networks like Twitter in the classroom. You know I am interested in this - just search my blog for names like "David Warlick" and "Stacy Baker", or dig through my "Education" and "Science Education" categories. These videos are all short - 10 or 20 minutes long, so I strongly recommend you watch all four clips: Chris Lehmann (@chrislehmann) - Social Media + Education: Real Time Communication and Education: Aparna Vashisht (@Parentella…

Unity without U is nity - Angela Shelton at #140conf (video)

clock | April 23, 2010
Angela Shelton (@angelashelton), an Asheville NC native, gave a powerful talk at the 140conf in NYC this week:

clock | April 22, 2010
In this talk, Jeff references his TEDx talk and a couple of his recent blog posts: The problem with comments isn't them and News(paper) in the cloud:

This week we'll be in New York City

clock | April 18, 2010
The Bride Of Coturnix and I are flying to NYC early tomorrow morning and leaving Thursday afternoon. While we set Monday and Thursday to be "for us", we are flexible if anyone wants to meet for coffee or lunch - just let me know and we can arrange something. We plan to meet with my brother late Monday night for dinner or drinks (depending how timely is his flight in) but we can meet earlier. On Tuesday and Wednesday, we will attend the 140 Characters Conference organized by Jeff Pulver: At #140conf NYC we will be taking a hard look at something Jeff Pulver calls "The State of NOW" and the…
Advertisment