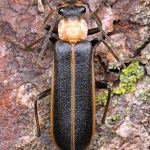 awild | February 5, 2010
A male western hercules beetle, Arizona. Meet Dynastes granti. This behemouth of an insect is North America's heaviest scarab beetle, found in the mountains of the American southwest where adults feed on the sap of ash trees. I photographed these spectacular insects a few years ago while living in Tucson. The impressive pronotal horn on the beetle pictured above indicates a male; females are considerably more modest in their armaments: Male and female hercules beetles As is so often the case in animals, males use their horns to fight each other for access to females, attempting to pry…

awild | November 27, 2009
Notoxus desertus - Antlike Flower Beetle Pyramid Lake, Nevada This furry little beetle comes with its own sun visor, a horn-like structure that projects over the head from the pronotum.Â  I photographed this Notoxus along the shores of Pyramid Lake where it was feeding on pollen. Photo details: Canon MP-E 65mm 1-5x macro lens on a Canon EOS D60 ISO 100, f/13, 1/250 sec, diffused twin flash 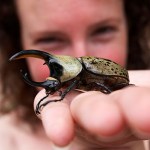 Another way to humanize an insect photo...

sb admin | April 28, 2009
...is to add an actual human. Dynastes granti - Western Hercules Beetle, Arizona It's funny how our social primate brain works. We gain immediate emotional access to an image simply by inserting a member of our own species. (Incidentally, that's one reason why David Attenborough's Life in the Undergrowth is so effective. With Attenborough able to share the screen with tiny arthropods, the result of a new generation of optics, that whole miniature world seems suddenly available.) Technical details: Lens: Canon 17-40 f4.0L wide angle zoom lens Body: Canon EOS 20D dSLR Settings: ISO 400…

Circus of the Spineless 37, A Blog Carnival for Invertebrates

grrlscientist | April 6, 2009
tags: Circus of the Spineless, invertebrates, insects, arachnids, plants, algae, blog carnival Welcome to Circus of the Spineless! This is the migratory blog carnival that specializes in all things spineless, and the contributions that you'll find here range from essays and photoessays, to photographs with some accompanying explanatory text and even a few videos. This blog carnival has seen some scary times in its recent past where it almost went extinct, but thanks to some friends of mine who are much more expert in spineless things, it was revived after I made a bunch of noise about…

awild | February 17, 2009
The Taliban Beetle, a specimen at the Naturhistorisches Museum Basel, Switzerland. Meet the Taliban Beetle. I took this picture in 2004 while visiting the collections at the Natural History Museum in Basel, Switzerland.Â  For reasons I was unable to discern, a coleopterist working in the collection in the late 1990's had intended to name this new Afghani ground beetle after the country's ruling party at the time.Â  Whether he came to regret this decision in the post 9/11 world, I do not know. No formal description of the Taliban beetle was ever printed.Â  So despite the official looking…

awild | January 23, 2009
Amblycheila cylindriformis, New Mexico The Giant Tiger Beetle Amblycheila cylindriformis is a tank of an insect, at 35mm in length the largest tiger beetle in North America.Â Â  Unlike the more familiar day-active Cicindela tiger beetles, the flightless Amblycheila lumbers about at night, catching hapless insects in its massive jaws. Photographing Amblycheila was difficult on account of the insect's shiny integument, so I used a white-lined cardboard box as a miniature studio.Â  A strobe fired into the box produced a diffuse white light. On display at the Audubon Insectarium. photo details…

awild | November 28, 2008
Martineziana dutertrei Fire Ant Beetle Texas Any insect that can fool an ant nest's security system gains access to rich stores of food.Â  Martineziana scarab beetles are found only in colonies of Solenopsis fire ants where they feed on the ants and their brood.Â  This beetle was collected from a red imported fire ant mound at the Brackenridge Field Laboratory in Austin, Texas. photo details: Canon MP-E 65mm 1-5x macro lens on a Canon EOS 20D ISO 100, f/13, 1/250 sec, flash diffused through tracing paper

awild | November 21, 2008
Priacma serrata - Bleach Beetle California Priacma serrata is an enigmatic insect from the conifer forests of western North America and is one of a handful of species belonging to the relictual beetle suborder Archostemata.Â  It is often thought of as a "living fossil", bearing a strong resemblance to the earliest known beetles that pre-date even the dinosaurs. Males are attracted to the scent of bleach, presumably because it resembles a female pheromone, and are sometimes collected off air-drying laundry.Â  In spite of its unique evolutionary position, the biology of Priacma has not been…

awild | November 14, 2008
Nosodendron californicum - Wounded Tree Beetle California, USA From the Department of Really Obscure Insects, here's a beetle that few non-specialists will recognize.Â  Nosodendron inhabits the rotting tissue of long-festering tree wounds.Â  These beetles are not rare so much as specialized to an environment where few entomologists think to look. Â  If you can spot the telltale stains of an old wound on the trunks of large trees, you should be able to find Nosodendron.Â  They feed on the microbes- the yeast and bacteria- that grow in the sap leaking from the phloem. There are, in fact, whole…

awild | November 7, 2008
Chrysina beyeri - Beyer's Scarab - Arizona Arizona's Jewel Scarabs emerge after the onset of summer rains. These large insects have something of a cult following among collectors, and enthusiasts from around the world descend on the Sonoran desert every monsoon season with their mercury vapor lamps and blacklights to entice the lumbering beetles into their traps.Â  The effects of this mass harvesting on Chrysina populations have not been studied, but they should be.Â  I'd hate to lose such an attractive species. Beyer's scarab, the largest Chrysina in the United States, feeds on oak foliage…

awild | October 5, 2008
Coccinella septempunctata This weekend's project: to shoot a beetle in flight.Â  I chose ladybirds not because they are pretty, but because they are the slowiest, clumsiest beetles I could find in any number.Â Â  An easy target. I had a cast of several beetles from two species, the seven-spotted ladybird Coccinella septempunctata and the multi-colored ladybird Harmonia axyridis.Â  I placed the beetles inside a whitebox with a backdrop of leaves, along with my Canon 550 speedlite flash, and tried to capture the beetles as they launched themselves into the air.Â  The timing was tricky, as it…

awild | September 26, 2008
Popillia japonica - Champaign, Illinois The ever colorful Popillia japonica has been in North America for nearly a century.Â  In spite of an unmistakable charisma, the charms of this unintentional visitor are largely lost among the ruins of chewed up rose bushes, grape vines, and raspberry plants left in its wake.Â  This beetle is a serious pest, and I don't know many gardeners who have welcomed its spread across the continent. For those with a camera, however, Japanese beetles are hard-to-resist eye candy.Â  The insects' metallic surfaces render photography a bit tricky, though, as glare…

awild | September 12, 2008
Prionocyphon Marsh Beetle (Scirtidae) New York Scirtidae is a small family of mostly small beetles found in wet, swampy habitats all over the world. Taxonomists find them to be difficult creatures, the larvae are archaic in appearance but the adults share some similarities with the elateriforms- click beetles, fireflies, and the like.Â  Recent research based on ribosomal DNA sequences showed why their evolutionary relationships have been so hard to peg.Â  Rather than fitting neatly inside one of the 4 beetle suborders, these insects are surprisingly old, diverging from the lineage that led…
Advertisment