Why so many of us sleep

dr. dolittle | March 11, 2016
A special thank you to reader Dr. Barbara Goodman, Professor of Physiology at Sanford School of Medicine of the University of South Dakota who sent me a story from The Scientist about sleep in animals complete with footage of a dolphin that was seen apparently "sleeping" (video posted on YouTube): Why do animals sleep? This is a question with many potential answers. It is known that birds and mammals experience slow-wave and rapid eye movement (REM) sleep patterns. During the first pattern, slow waves with high amplitudes can be seen if measuring electrical activity (EEG) in the cortex.… 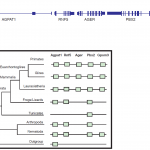 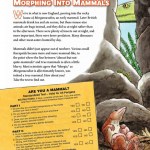 How to determine if you are a mammal...

laelaps | June 16, 2010
A golden-mantled ground squirrel (Spermophilus lateralis), photographed in Bryce Canyon National Park, Utah. Though abundant at the Samwell Cave Popcorn Dome, California site during the Late Pleistocene, its numbers in the area decline at the beginning of the present Holocene epoch."One of the penalties of an ecological education", the naturalist Aldo Leopold once wrote, "is that one lives alone in a world of wounds." Few knew this better than he did. Despite becoming a celebrated advocate of wilderness for its own sake during the early twentieth century, Leopold began his career by hunting…

laelaps | June 10, 2010
"Dinah", a young female gorilla kept at the Bronx Zoo in 1914. From the Zoological Society Bulletin.Frustrated by the failure of gorillas to thrive in captivity, in 1914 the Bronx Zoo's director William Hornaday lamented "There is not the slightest reason to hope that an adult gorilla, either male or female, ever will be seen living in a zoological park or garden." Whereas wild adult gorillas were "savage" and "implacable" beasts which could not be captured (a photo of a sculpture included in Hornaday's article depicts a gorilla strangling one man, brandishing another about with its other arm…

laelaps | May 31, 2010
A young lowland gorilla (Gorilla gorilla), photographed at the Bronx Zoo.

laelaps | May 28, 2010
An ebony langur (Trachypithecus auratus), photographed at the Bronx Zoo.

laelaps | May 26, 2010
A huon tree kangaroo (Dendrolagus matschiei), photographed at the Bronx Zoo.

laelaps | May 25, 2010
Close up of one of the Pipe Creek Sinkhole coprolites showing structures interpreted as hair (A) and a close-up of a mold in the coprolite thought to have been made by a hair (B). From Farlow et al, 2010. Time and again I have stressed that every fossil bone tells a story, and, in a different way, so do coprolites. They are small snapshots of a moment in the life of an organism, often preserving bits of their meals, and while they may not get top billing in museum halls, they are among the most pungent reminders that weird and wonderful organisms really did live during the remote past. As…

laelaps | May 24, 2010
A lowland gorilla (Gorilla gorilla), photographed at the Bronx Zoo.

laelaps | May 20, 2010
A gelada (Theropithecus gelada), photographed at the Bronx Zoo.
Advertisment