Statistics, seals and sea monsters in the technical literature

By complete coincidence - honestly! - we looked yesterday at discovery rates among terrestrial mammals. All indications are that many species remain to be discovered. It should also be well known, and I hope it is, that the same is true for large marine vertebrates: recent discoveries, and extrapolations based on discovery rates, indicate that there are still new, large marine animals to find. 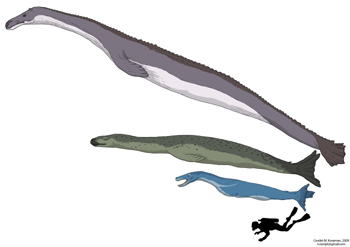 Today sees the publication of a new paper by myself and two colleagues, Michael Woodley and Hugh Shanahan, in which we attempt to estimate the number of pinnipeds that might remain undiscovered (pinnipeds are the seals, sea lions, and walruses). And what makes our study unusual is that we then linked this research with an analysis of the cryptozoological literature. How? Why? Who cares? Let's find out...

The contention that new, large marine vertebrates await discovery is vindicated by history. The Lesser beaked whale Mesoplodon peruvianus (aka Bandolero beaked whale, or Peruvian beaked whale) is known from specimens discovered between 1975 and 1989, both Perrin's beaked whale M. perrini and Omura's whale Balaenoptera omurai were discovered during the late 1970s, the Megamouth shark Megachasma pelagios was discovered in 1976 (and the discovery of a possible second species was announced in 2004), and the Indonesian coelacanth Latimeria menadoensis was discovered in 1998 [image above, showing a merhorse/cadborosaur, long-necked seal and tizheruk to scale with a diver, by Cevdet Koseman].

A surprising eight pinniped species were named during the 20th century, though most have either turned out to be synonymous with other species, or were actually known long prior to the 20th century. When all of this is taken into account, the most recently named species is the Hawaiian monk seal Monachus schauinslandi Matschie, 1905. If new, large marine vertebrates can still be discovered recently, and if new pinniped species were still being named as recently (comparatively speaking!) as the early 20th century, is it at least possible that new pinnipeds might await discovery?

Are there new pinnipeds to find? We decided to test this possibility by subjecting the data to statistical analysis. By plotting discovery rates over time, an extrapolation curve can be generated, and estimates can then be made about the species yet to be discovered. Discovery curves typically reach a plateau phase before the likelihood of further discoveries becomes statistically negligible.

Several workers have published analyses of this sort before. Paxton (1998, 2001) looked at discovery rates among large, open-water marine animals, Raynal (2001) looked at discovery rates in cetaceans alone, and Solow & Smith (2005) looked at large marine animals in general. These studies all concluded that (at minimum) ten new large marine animals await discovery, with the upper limits from some analyses being 15, 16 or even as high as 50. And what did the pinniped discovery data indicate? Essentially, that there might be a few species yet to find, but that the number is low (Woodley et al. 2009).

Note that, while one statistical technique we employed (regression based on a Michaelis-Menten function) suggested the presence of as many as 15 new species, we conclude that this 'represents a sizable over-estimation of the true numbers remaining to be described', and it did not match the discovery record as well as other techniques (namely logistic regression) [Fig. 2 from Woodley et al. (2009) shown here. The curve shown was generated following logistic regression]. So, there might be a few pinniped species yet to find. Given that pinnipeds are - generally speaking - large, noisy, obvious animals that use coastlines, it stands to reason that there aren't going to be lots of undiscovered species. The analytical work is still worth doing however: without it, any extrapolations are conjectural and based on opinion more than analysis [in adjacent image, Michael and I are shown hard at work. Photo by kind courtesy of Dr Mark Witton].

Most workers would, probably, have stopped there. We decided to do something different. Michael and I are very interested in cryptozoology and have both published on aquatic cryptids (Naish 1997, 2001, Woodley 2008): that is, on the mysterious aquatic creatures, known almost exclusively from anecdotal accounts, that seem not to match officially recognised taxa. Here I must note that, while it's inevitable that journalists and commentators will focus on the 'sea serpent' aspect of our article, our study is, first and foremost, about the pinniped discovery record.

Anyway, the cryptozoological literature is full of accounts of weird aquatic creatures, and at least some of these animals sound pinniped-like. In fact it has been speculated by some that certain aquatic cryptids might be undiscovered pinnipeds (Oudemans 1892, Heuvelmans 1968, Costello 1974, Mackal 1983, Cornes 2001, Coleman & Huyghe 2003). What's interesting is that the number of cryptids suggested to be of a pinniped identity is low: as in, around two or three. In other words, the cryptozoological record matches with the extrapolation made from the discovery data. It might seem odd to include a discussion of crypto-pinnipeds in a technical paper, and I know that some people are not going to see this as at all useful.

Nevertheless, as we note in the paper, 'the exclusion of many cryptids from the formal literature has prevented technical appraisal. In turn, this has helped perpetuate a cycle in which these alleged creatures remain predominantly in the 'grey literature' and are never really objectively assessed' (Woodley et al. 2009, p. 5). So, could Heuvelmans's long-necked sea-serpent, the merhorse, or the tizheruk of the Canadian Arctic [shown here] really be plausible crypto-pinnipeds? If so, these are radically strange beasts, different from known pinnipeds in several respects (size being one notable factor!). On the other hand, their peculiarity relative to other pinnipeds could, hypothetically, explain how they've evaded detection for so long: 'Ultimately, only with the passage of time will the question of whether there remain undescribed pinniped species be resolved, irrespective of how intriguing the evidence' (Woodley et al. 2009, p. 9).

Oudemans, C. A. 1892. The Great Sea-Serpent: An Historical and Critical Treatise. Brill, Leiden.

November 8, 2011
You are currently at the old, defunct version of Tet Zoo. To see new stuff (from July 2011 to present), click here. See you there.

Goodbye Tet Zoo ver 2. This really is the end.

July 5, 2011
On January 23rd 2007, Tet Zoo ver 2 - the ScienceBlogs version of Tetrapod Zoology - graced the intertoobz for the first time. There was rapturous applause, swooning, the delight of millions. Looking back at it now, that very first ver 2 post is rather odd. It's on the blood-feeding behaviour of…

June 30, 2011
So sorry for the very short notice. The following airs here in the UK tonight (Thursday 30th June 2011), Channel 4. I look forward to it. For the Tet Zoo articles on ING and related issues, see... Inside Nature's Giants: a major television event worthy of praise and accolade. Part I! Inside…

June 29, 2011
If you didn't know, I've been away. The last four articles that have appeared here were all scheduled to publish in my absence. I've been in Romania and Hungary where I had a great time - saw lots of neat animals (fossil and living) and hung out with some neat people. I'll talk about some of this…

June 27, 2011
Yet more from that book project (see the owl article for the back-story, and the hornbill article for another of the book's sections). Hornbills, hoopoes and woodhoopoes are all similar in appearance and have been classified together in a group termed Bucerotes. Vague similarities with other long…