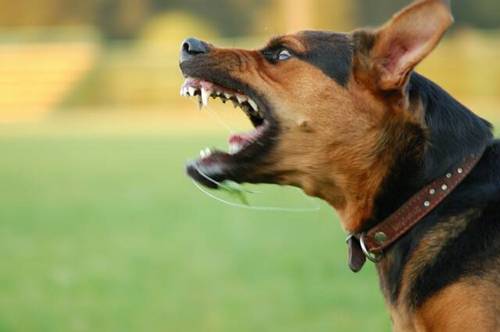 In March 2000, Dr. Simon Chapman and colleagues from the University of Sydney published a paper in which they assessed the effectiveness of an educational intervention for the prevention of dog bites in children.

"Prevent-a-Bite" is an educational programme designed for primary school children. The programme aims to instill precautionary behaviour around dogs, assuming that this might reduce the incidence of attacks. A randomised controlled trial of the efficacy of the intervention was conducted in Australian children aged 7-8 years who were presented with an unsupervised opportunity to approach a strange dog.

Shortly after the publication of this paper, Chapman received a short note from a local farmer: "Have you university types ever looked at whether dog bites happen more around the full moon? It's a well known fact that they do."

It is also a well known fact that farmers (not to mention the rest of humankind) are the unwitting victims of confirmation bias, recall bias, and other various invisible gorillas. The nature of the human mind, combined with the rich oral folkloric traditions passed down from earlier generations of farmers to later generations, makes the persistence of these myths understandable. Being university types of the highest order and respectability, Chapman and a colleague, Stephen Morrell had no choice but to respond, so they "leashed their skepticism" and investigated.

They note: "Although more women have been documented to menstruate around the full moon," (really? I'm skeptical. paging Scicurious) "research has generally failed to confirm any association between the full moon and the manifestation of psychiatric disorders or violence in psychiatric settings, consultations for anxiety or depression in general practice, suicide and self poisoning, agitation among nursing home residents, car accidents, major trauma, or emergency department admissions."

But perhaps man's best friend is more susceptible to the tidal effects of the moon than is man himself. Chapman and Morrell decided that they had to determine if dogs bite humans more often when it is a full moon, or if Rover's bark is truly worse than his bite.

The researchers accessed twelve months' worth of public health records, and extracted the data on daily admissions for dog bites from all accident and emergency departments in Australian hospitals. They selected a year (June 13, 1997 through June 12, 1998) that had sufficient full moons and dog bites so that any significant correlation could be ...sniffed out (with thanks to the authors for the brilliant pun). The ended up with a total of 1671 dog bites, an average of 4.58 bites per day. Peak days were identified, which contained higher than ten admissions per day. Full moons coincided with exactly zero peak days. (Shocking, I say. SHOCKING.) 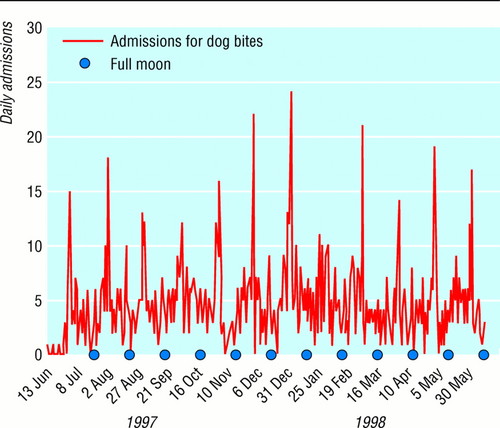 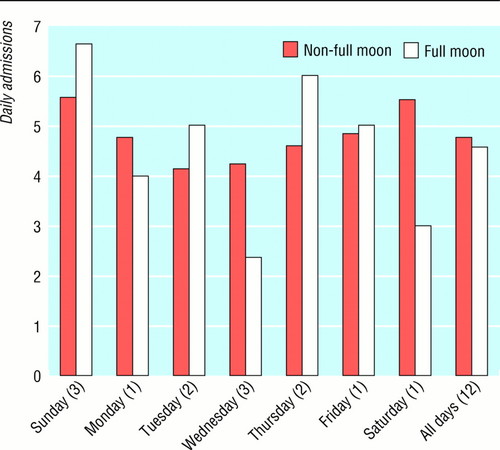 The most dog bites occurred on weekends (average 5.5 for Saturday, 5.6 for Sunday), which makes sense because more people are spending their time interacting with their pets on weekends.

I, for one, am glad that we university types have things like statistics and empirical data on our side. Otherwise, we'd suffer the same confirmation bias as that lunatic farmer. And that would be bad times, indeed.

Feeling tired? You’re not alone. A new study finds that many U.S. workers aren’t getting enough sleep, which is essential to optimal health, and that people who work multiple jobs are at heightened risk of getting less than the recommended hours of nightly rest. To conduct the study, which was…

Blue Moon You knew just what I was there for You heard me saying a prayer for Someone I really could care for... -Richard Rodgers & Lorenz Hart Tonight is the last night of 2009, there's a full Moon, there's a sliver of a partial lunar eclipse, and it's the second full Moon this month. Q: Does…

"In the depth of winter I finally learned that there was in me an invincible summer." -Albert Camus As the year draws to a close, we approach a very special time of year, at least from an astronomical perspective. This Saturday, December 21st, will mark the Winter Solstice in the Northern…

Why Even Close Associates Sometimes Have Trouble Communicating: Particularly among close associates, sharing even a little new information can slow down communication. Some of people's biggest problems with communication come in sharing new information with people they know well, newly published…

OK, so there is no significant correlation between full moon and dog bites, but what is causing the spikes on the graph?
The x axis is too small scale to see detail but it certainly looks like there is a regular(ish) spike in bites, over 10 bites per day, about once a month.

Ian: weekends. It's described right there, in the paragraphs under the figure. Did you stop reading before the end?

Some of the large spikes could be explained by social factors - ie. holidays during which many people visit their relatives and friends at their homes, times of the year during which people are likely to get new pet dogs, things like that.

There are four weekends a month, not one.

I am with Ian. No doubt in my mind that that the Fourier Transform of this data shows a strong (and statistically significant) peak at monthly frequency. The interesting question is its phase--which looks like it's spot on the new moon.

Mike (@3) has it spot on. There are more bites on weekends as well as during winter break - the days surrounding Christmas and New Years... As would be expected simply because people aren't at work and school, and are instead hanging out with their pets.

More interesting is why some people are convinced - by eye-balling a graph with insufficient resolution on the X-axis - that there MUST be some causal relationship between moon phase and dog bites.

The data should be broken down according to diurnal vs. nocturnal bite incidents. Perhaps dog bites at night would correlate better with moon phase.

I also wondered like Darwinsdog (when I started reading the article) if there was any corelation would it have to do with dogs being out on moonlit nights, and did the not so crazy farmer mean dog bites on _stock_ (from which he wrongly extrapolated dog bites in general).

Other than very subtle tidal influences, it's hard to imagine what effect the full moon would have on dogs during the daylight hours. It might be different at night when moonlight or its lack could conceivably influence dog behavior. Since the data presented doesn't break down the time of day or night the bites occurred, correlation between moon phase & bite frequency at night might be masked.

Also, only bites on humans that required emergency room treatment are reported. Dog bites on other dogs, on livestock (as stephenk suggests), and on people who don't seek medical attention, aren't taken into consideration. We can't know from these data whether or not a correlation could be identified if all bites were reported.

I'd agree with stephenk. It'd be interesting to see whether dogs who are known to roam roam farther on moonlight nights, or whether diminished vision accompanied by good senses of hearing and smell allow them to navigate as easily to the sheep etc on overcast nights/when there are crescent moons.

Stephenik: Yes, Australia in December. People are going to be outside with their dogs more and encountering other people in the summertime.

John,
only having a gentle dig at north-o-centrism. :-)

also not sure where you are from but the nicest weather in the year to be out and about for me can be about now and about march-april. Dec-Feb can be a bit trying at times.
This wasn't pleasant to be in:
http://en.wikipedia.org/wiki/Early_2009_southeastern_Australia_heat_wave

simba: Actually full moons do not improve night vision, at least not in humans (maybe in dogs though) it makes it worse, harder to see in the shadows.

There certainly are 12 pretty evenly spaced dramatic peaks...does seem to correlate with the new moon. How did they explain the monthly spikes?

It's really interesting how this all started, technically, because of folklore. Is there a specific reason why that farmer, or countryfolk in general, believe that dog bites occur more on full moons, besides the folklore?
And are there any other situations where superstitions affect how people think, even when scientific evidence proves otherwise? For example, bad luck caused by black cats, or walking under ladders. I think it's just another area of the human psychology that deserves to be explored.

Isabel, et al, re 'sort of'? monthly spikes:
(monthly) meter readings (electricity, gas, other?).
Do the data include who got bit (age, sex, occupation)?

Not seeing any new posts? I'm at Scientific American Blogs!

July 25, 2011
If you didn't catch the message, this blog has moved! You can find The Thoughtful Animal over at the new Scientific American Blogging Network! Please remember to add or change the link to my blog in your blogrolls. The new URL is:http://blogs.scientificamerican.com/thoughtful-animal/ If you use an…

July 5, 2011
In March 2010, I was invited to leave behind the relative obscurity of my wordpress blog for the warm community (and increased visibility) of ScienceBlogs. What a tremendous honor and opportunity that was! But there comes a time in the life of every blogger when one must say goodbye to one's…

Monday Photoblogging: Before and After

July 4, 2011
This weekend saw a trip to the boardwalk and beach in Santa Monica. There are often sailboats out on weekends, and I was hoping to get some good shots with my new telephoto zoom lens. Unfortunately, it was very, very hazy. The light was bad, everything was very washed out, and it was hard to get…

July 1, 2011
I'm on Google+. After a couple days of playing with it, I haven't quite identified what it is for, or at least how I'm going to use it differently from twitter or facebook, but so far I am generally impressed - it's easy, intuitive, and fast. It also allows you a level of selective privacy that -…

June 28, 2011
Here are my Research Blogging Editor's Selections for this week. To start us off this week, Neuroskeptic discusses a new study that attempted to use a computer to translate therapists' notes into psychiatric diagnoses. Could it be that certain language used by therapists or their clients could…